Pagasa: Rain over Luzon, Visayas due to new LPA, tail end of a cold front 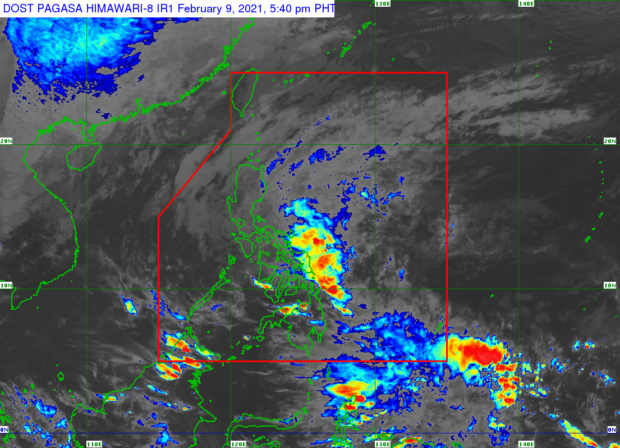 MANILA, Philippines — A new low-pressure area (LPA) east of Northern Samar and the tail end of a frontal system were causing precipitation over parts of Luzon and Visayas on Tuesday, state meteorologists said, adding such weather condition may even continue until Wednesday.

Based on the Philippine Atmospheric, Geophysical and Astronomical Services Administration’s  (Pagasa) bulletin on Tuesday afternoon, the LPA was last spotted 125 kilometers east of Catarman town.

LPA’s presence, Pagasa said, means the warm winds or easterlies that contributed to its formation met winds brought by the northeast monsoon or amihan, creating a tail end of a frontal system.

Both LPA and cold front, it noted, would bring rains over Eastern Visayas, Bicol Region, Calabarzon, Oriental Mindoro, Marinduque, Romblon, Aurora from Tuesday night to Wednesday.  However, Pagasa said the LPA is not expected to develop into a tropical cyclone.

For the rest of Luzon, including Metro Manila, the northeast monsoon will bring cold weather and light rain also from Tuesday night.

(The areas of Aurora, Quezon, Bicol Region, and some parts of Mimaropa would continue to see cloudy weather with scattered rain showers due to the combined effects of the tail end of a frontal system and the low-pressure area.)

(Meanwhile, the northeast monsoon would still cause cloudy skies and light rain over areas in Cagayan Valley, Cordillera Administrative Region, and some parts of Central Luzon and even here in Metro Manila.)

Eastern Visayas will also experience rain while the rest of Visayas and Mindanao may have generally fair weather with possible isolated rain by Wednesday afternoon and night.  Tacloban’s climate will be between 24 and 29 degrees Celsius, slightly colder than Iloilo and Cebu’s 24 to 31 degrees Celsius.

Meanwhile, a gale warning remains hoisted over the seaboards affected by the amihan, particularly western and northern waters of Ilocos Norte, Batanes, the northern and eastern coastlines of Cagayan Valley, including Babuyan Islands, and waters surrounding Quezon province and Bicol Region.

Fisherfolks were then advised not to go out to sea because of rough to very rough sea conditions.