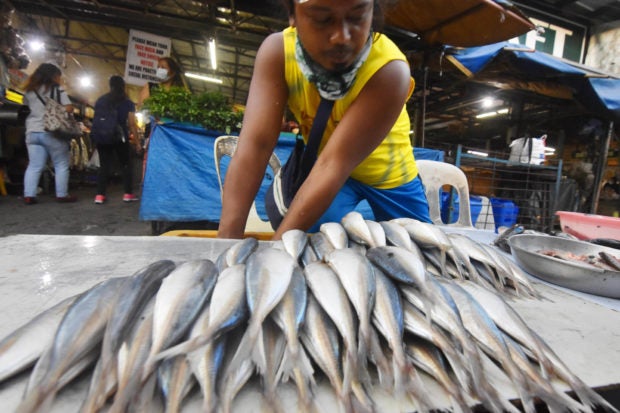 “There is one major concern that we need to solve and be part of the solution,” Dar told BFAR officials in a virtual meeting, noting that Metro Manila residents should have alternative food.

He added: “This is now open season for ‘galunggong,’ let’s bring them, let’s buy through our fishers’ cooperatives.”

On Feb. 2, the BFAR announced that it had lifted the three-month ban on the fishing of galunggong in northeastern Palawan. The province supplies 95 percent of galunggong sold in Metro Manila.

Since 2015, the agency has been imposing short-term bans in major fishing grounds to preserve the country’s fishery resources.

In a statement, BFAR Director Eduardo Gongona said the supply of galunggong in wet markets in Metro Manila was expected to increase, stabilizing its price, because of the lifting of the “no fishing” season.

Dar has asked Gongona to realign the agency’s budget that could be used to support cooperatives that would engage in trading and marketing of fish.

“Let us help each other. Let us flood Metro Manila with low-priced fish like galunggong. Let us compete with those who are importing,” Dar said.

The price of galunggong must not go beyond P200 per kilo, the BFAR said.

Based on the price monitoring of the bureau in Ilocos, galunggong was sold at between P130 and P200 per kilo last week.

But Dar said the prices of other fish, such as tilapia and “bangus” (milkfish), should also be closely monitored so as to remain affordable.

“This is going to be a partnership and this is an order for all of you to be a part of it. It would be useless if we can’t solve the problem of food security,” Dar said at the meeting.

Rosario Segundina Gaerlan, director of the BFAR for Ilocos region, said her office had been sending fish to Metro Manila amid the pandemic, saying it had excess production of bangus.

Dar has recommended fish as alternative food while some pork traders in Metro Manila have called for a “pork holiday” to protest the price ceilings on meat.

Pork prices have soared due to the spread of the African swine fever that has affected the operations of major hog raisers in the country.

Dar has blamed unscrupulous traders and wholesalers for the high prices of pork.