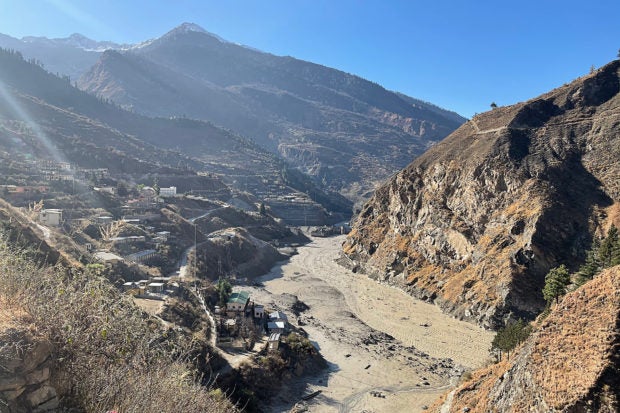 This general view shows state-run NTPC hydropower project site damaged after a broken glacier caused a major river surge that swept away bridges and roads, near Joshimath in Chamoli district of Uttarakhand, on February 7, 2021. – At least 200 people are missing in northern India after a piece of Himalayan glacier fell into a river, causing a torrent that buried two power plants and swept away roads and bridges, police said on February 7. (Photo by Ajay BHATT / AFP)

Tapovan, India — A whistle turned into a roar of water that trapped a dozen men in a Himalayan tunnel after a glacier burst in northern India, but Rajesh Kumar lived to tell the tale.

Eighteen people were confirmed dead on Monday and at least 200 others missing after the glacier broke off a mountainside, triggering a flash flood through a valley in the northern state of Uttarakhand.

Floodwaters swamped a nearby hydro complex where Kumar and his colleagues were working 300 meters (984 feet) inside a tunnel.

“We didn’t think we were going to make it,” the 28-year-old told AFP from his hospital bed.

“Suddenly there was a sound of whistling… there was shouting, people were telling us to come out. We thought it was a fire. We started running but the water gushed in. It was like a Hollywood movie.”

The men clung to scaffolding rods in the tunnel for four hours, keeping their heads above water and debris, trying to reassure each other.

“We just kept telling each other –- come what may, we must not let go of the rods. Thank God our hands did not lose their grip,” said Kumar.

As the flood coursed down the valley, the water started to recede in the tunnel, leaving it filled with more than five feet (1.5 meters) of debris and mud.

“We climbed across the rock debris and forced our way to the mouth of the tunnel,” said Kumar.

There they found a small opening but they were not sure where it led.

“All we knew was that we could feel some air.”

Eventually, they saw some light coming through and one of the men got a phone signal and called for rescue.

There were emotional scenes as Kumar and his colleagues were pulled out of a tiny hole at the surface.

Some punched the air in joy as they saw daylight, some were put straight onto stretchers and carried away. One man put his arms in the air and then fell face-first into the mud.

They were trapped inside a flooded tunnel for four hours but miraculously managed to escape with just minor injuries.

The glacier broke away as the power complex was in full operation, and scores of workers at two power plants are still missing.

Some 35 workers were feared trapped in another tunnel.

The chief minister of Uttarakhand, Trivendra Singh Rawat, said efforts to clear the tunnel had continued through the night.

About 80 meters of mud and rock had been taken out, but there was still another 100 meters to go to reach the workers.

“It is possible that about 35 people are stuck inside,” Rawat said.

Hundreds of paramilitary and emergency service workers were scouring the valley on Monday for signs of more survivors.