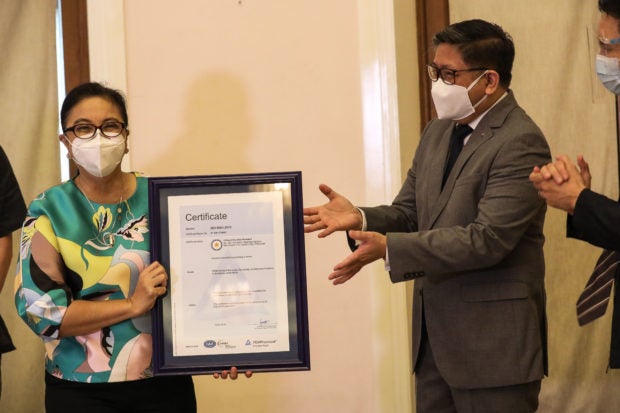 Vice President Leni Robredo led the Office of the Vice President in receiving its ISO 9001: 2015 recertification on Monday, Feb. 8, 2021. The awarding came after a successful audit conducted by TÜV Rheinland in December 2020, which looked into the implementation of the office’s quality management system. In her remarks, VP Leni said the recertification affirms the “culture of excellence” that the OVP strives to uphold as it serves the Filipino people, especially amid the COVID-19 crisis. (JAY GANZON/OVP)

MANILA, Philippines — The Office of the Vice President (OVP) formally received on Monday the recertification from the International Organization for Standardization (ISO) after a successful audit of its quality management system.

OVP said in a statement that the recertification comes after the office, under Vice President Leni Robredo, applied and secured the ISO 9001: 2015 certification back in 2017.

This particular recertification, made after TÜV Rheinland’s audit last December 2020, would be valid for another three years.

As it was before, OVP noted that applying and obtaining the ISO is part of their effort to streamline procedures and processes, while professionalizing its ranks. The OVP underscored its importance, especially in recent times when the COVID-19 pandemic hampered normal activities.

Robredo emphasized though that OVP is not only working hard to attain the recertification, but also to show that efficient service can be done in the country, and lead a “culture of excellence”.

(What’s good with this is that we are not only working for the certification or recertification, but we work continually as a culture of excellence and a culture of quality service has been ingrained in our system, and not just doing for cosmetic purposes; the most important thing is what you are doing behind and beneath it.)

The recertification was made formal in a small ceremony at the OVP office in Quezon City, where Robredo and other OVP officials received the award personally.  The gathering was limited due to health protocols amid the health crisis.