What fake news? Judiciary beat reporters write their stories based on court records

MANILA, Philippines – In general, journalism is about writing a report based on the facts. However, only those working in the media sector themselves know the nitty-gritty of the job.

It is certainly a cornerstone of journalism to get the five “Ws” and one “H” and write your story in an inverted pyramid style — meaning you lay down the most important facts first, while the less important details are in the center of the last part of the story to add context and better understanding.

A journalist’s job description includes the following topics that affect politics and the law and writing about people in court: On the first two statements, sources of knowledge speak directly to the public, such as news conferences, daily forums, television and radio interviews.

For the judiciary, however, casual contact with newsmakers is very rare. Even lawyers wanted to be quoted from the pleadings that they had filed. A journalist’s work is almost entirely paper-dependent –petitions, manifestations, interventions, affidavits, decisions, court orders, and the list goes on. The multiple pleadings filed with the Supreme Court concerning the Republic Act 11479 or the Anti-Terrorism Act of 2020 are prime examples of this.

The Anti-Terrorism Act’s legality was brought before the Supreme Court three days after it was signed into law by President Rodrigo Duterte. On July 6 alone, four petitions have been filed. The number has since increased to 37 petitions.

Aside from the petitions, the petitioners filed numerous manifestations to inform the Supreme Court of incidents related to the implementation of the law.

Lt. Gen. Antonio Parlade asked his friends in a Facebook post if this reporter based her November article on the two Aetas on a petition filed before the Supreme Court or on her supposed bias against the military. (Please see photo below) 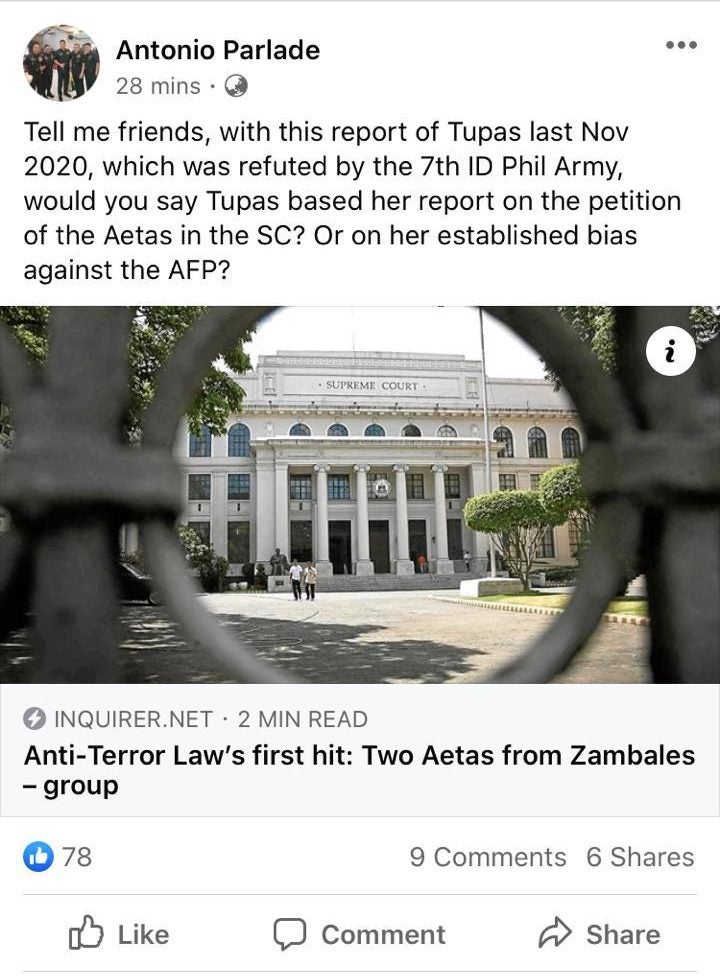 The case involving the two Aetas as the first persons to be charged with violating the Anti-Terrorism Act was raised in November 2020. It is not a petition, but it is filed through manifestation to the Supreme Court by the National Union of Peoples’ Lawyers (NUPL). (Please see photo below) 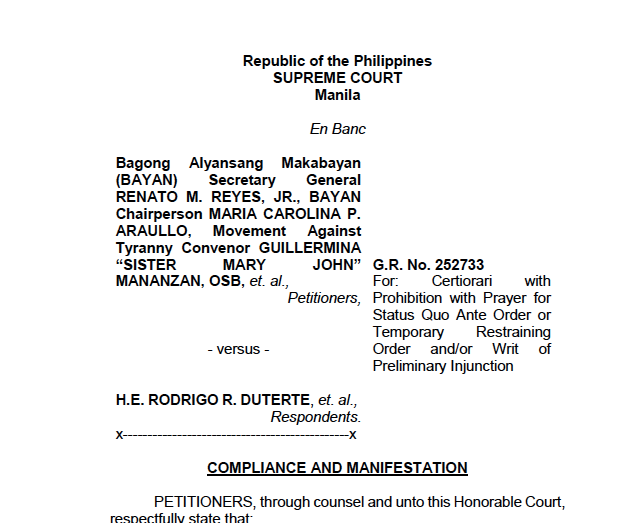 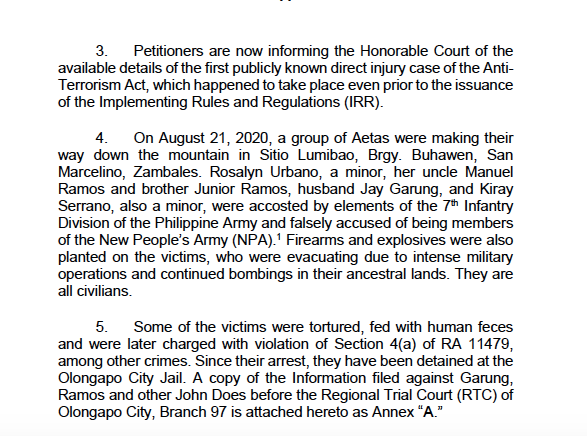 Bias, according to the Supreme Court in PET Case No. 005, “means a preconceived notion, which may be favorable or unfavorable to a party.” Bias does not mean writing for or against a specific case. Judiciary-beat is paper-dependent, which means petitioners against the Anti-Terror Law and the government will get the same treatment when they file a plea to the Supreme Court.

The consolidated comment and supplemental comment were submitted by the Office of the Solicitor General on July and August 2020, respectively, ahead of the manifestation made by the NUPL about the case of the Aetas.

The details of Gurung’s alleged torture were not sourced from international advocacy group Human Rights Watch or alternative media outfit Kodao. Gurung’s narration is contained in the petition-for-intervention filed by Gurung and Ramos through NUPL.

A transcript of the interview is incorporated in the petition filed on the morning of Feb. 2, 2021. (Please see photos below) 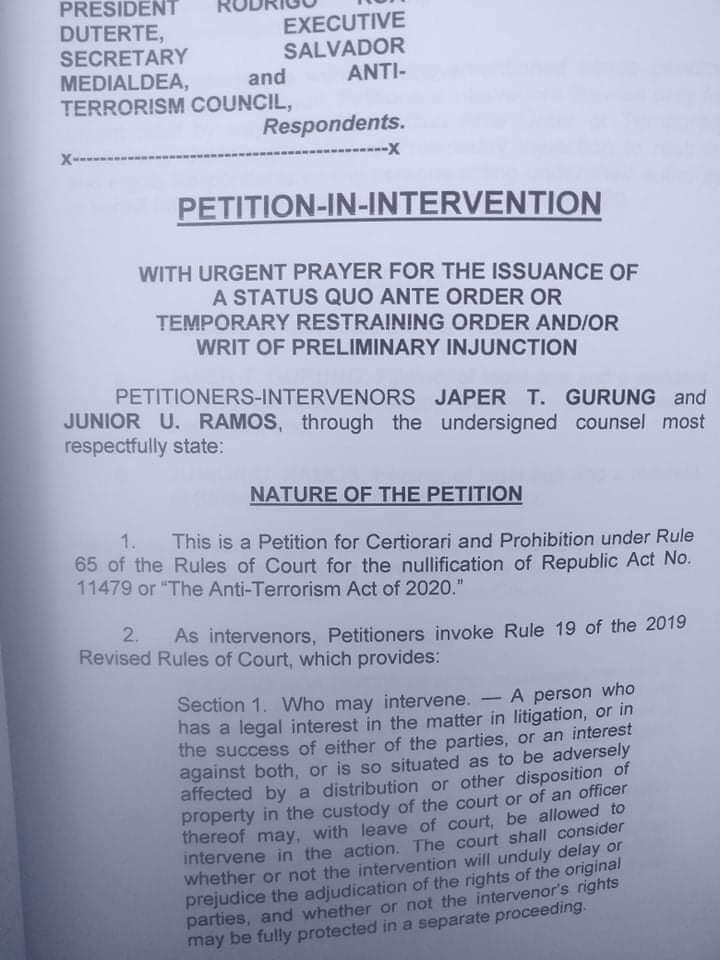 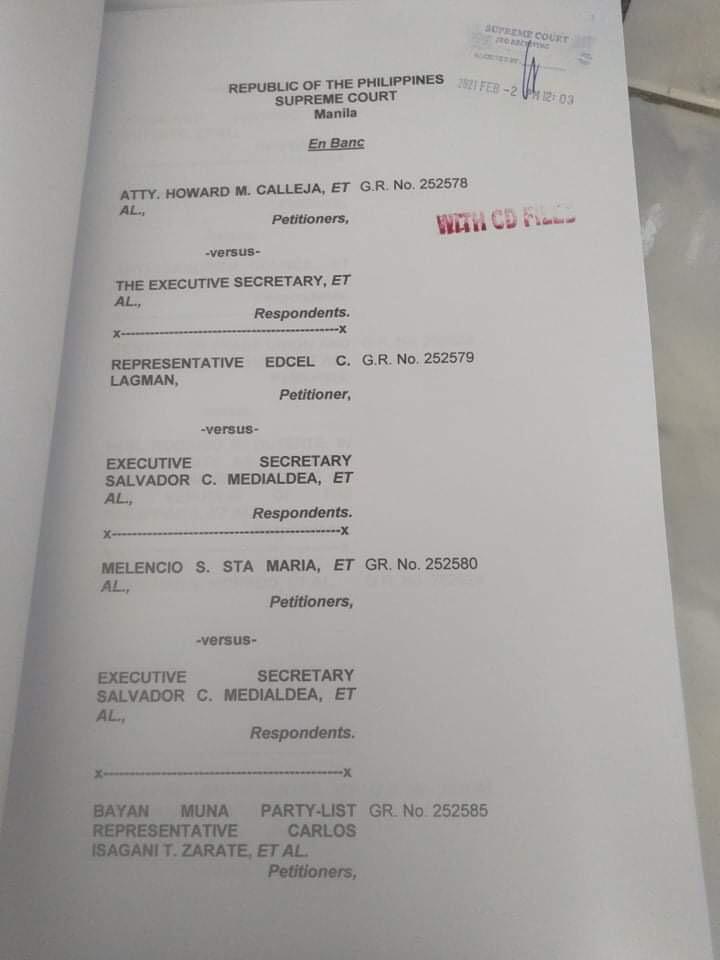 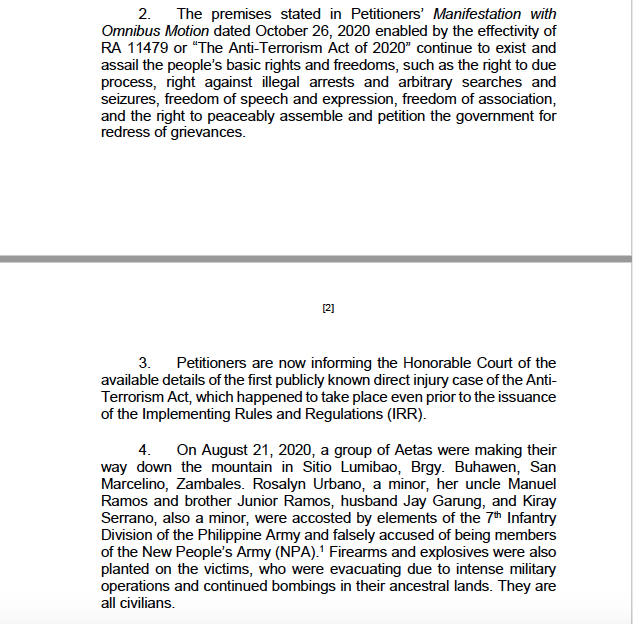 Is the military unit mentioned in the news story in Davao?

Again, a Judiciary-beat reporter relies heavily on paper. The name of the military division was lifted in the petition-in-intervention itself. (Please see photo below) 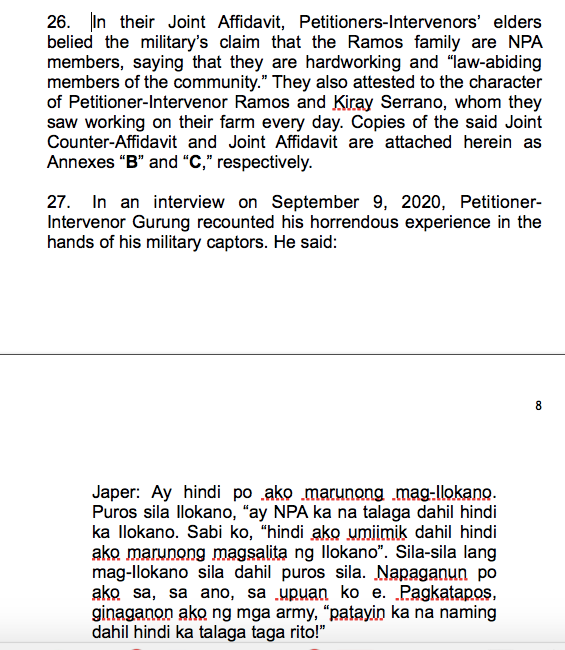 Where did the intervenors lift the military unit that allegedly arrested and detained the two Aetas? The military unit was mentioned in the resolution of the provincial prosecutor. (Please see photo below) 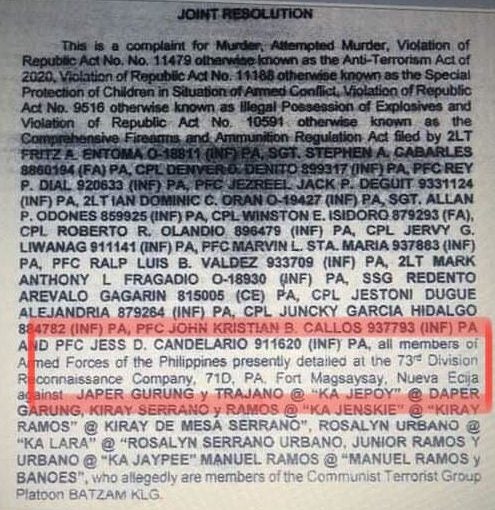 The story about the Aetas is not even an exclusive story. It was written by reporters covering the Judiciary. If this reporter, according to the general, can be charged for aiding the terrorists, an act punishable under Section 12 of the Anti-Terrorism Act, does it mean that the other reporters who wrote the same story are supporters of terrorists as well?

The Justice and Court Reporters Association (JUCRA), in a statement, said its other members “have also written the petition for intervention, based on the same Supreme Court pleading. Should we all wait for a threat from Parlade, too?”

“By goading his followers, even saying “hindi kita titigilan hanggang hindi mo sinasagot tanong ko (I will not let you off the hook until you answer my question), Parlade has put us all in actual harm,” read the JUCRA statement.

The question now is, who’s next?