Greece’s #MeToo movement leads to calls for reckoning on incest 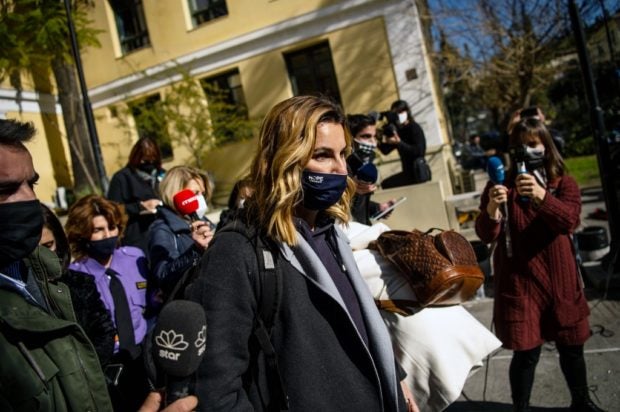 Greek Olympic sailing champion Sofia Bekatorou leaves the prosecutor’s office after she testified on her sex abuse case on January 20, 2021 in Athens. The 43-year-old mother of two said she was 21 when she was subjected to “sexual harassment and abuse” by a senior federation member in his hotel room, shortly after trials for the 2000 Sydney Olympics. Photo by ANGELOS TZORTZINIS / AFP

ATHENS — Greece’s emerging #MeToo movement, sparked by an Olympian’s taboo-breaking decision to go public with allegations of sexual abuse, has raised hopes it can also uncover long-hidden stories of incest in the patriarchal country.

Stories of sexual trauma have in recent weeks spread from sports to the world of entertainment, academia and beyond, and some experts say it is only the start of a reckoning on an issue long kept under wraps.

More than three years after the #MeToo movement surfaced in the United States, Sofia Bekatorou — a two-time Olympic medallist in sailing — broke the code of silence in her own country.

Bekatorou, now 43, testified in January that she was 21 when she was subjected to “sexual harassment and abuse” by a senior Greek sailing federation member in his hotel room, shortly after trials for the 2000 Sydney Olympics.

Her comments have encouraged other women athletes, students, journalists and actresses to break decades of silence.

During her own testimony, Bekatorou had given evidence on the rape of the young girl, now aged 20, to prosecutors.

The young athlete and her parents have also testified.

More than a dozen actresses have also reported sexual harassment dating back to the start of their careers, while a well-known Greek composer is also facing such accusations.

But most victims continue to keep their trauma well-hidden, some experts say.

“Ninety percent of sexual aggressions remain under wraps,” said Vassiliki Artinopoulou, professor of criminology at the Panteion University of Athens.

“Only the tip of the iceberg becomes public.”

Konstantinos Yannopoulos, president of Smile of the Child, a non-profit child welfare organisation, said the Greek #MeToo movement should also shine a light on cases of incest.

“In the majority of cases, the father is the aggressor and, in the worst scenario, the mother is covering for him,” he said.

“We are living in a sexist society. That justifies men’s actions.”

Yannopoulos is calling for the establishment of a national organization to gather reports of incest cases and provide help for the victims.

In an effort to break the taboo of speaking about incest, the omniatv.gr website has launched a campaign to raise awareness about sexual aggression between family members.

It has highlighted the case of Eleonora (not her real name), who said her brother sexually abused her when she was 11.

Her case led to the #MilaKaiEsy (#Speakuptoo) campaign, which aims to financially support Eleonora in her legal case.

She reported her brother to the authorities in 2018 despite her family’s opposition, 15 years after the alleged incident. He was eventually sentenced to three years in prison in early 2020.

‘Between family and truth’

The campaign also aims to “encourage other people with similar experiences to talk,” Loukas Stamellos, who writes for omniatv, told AFP.

Eleonora told omniatv in an interview published in December that she had to “choose between her family and the truth”.

Her mother told her “you are going to shame us” when she revealed her brother’s crime and her intention to report him.

“I could have shut up for the rest of my life, remained an accomplice to the comedy they were all playing with me as a protagonist in a silent role,” Eleonora told omniatv.

In the interview, she recounted her struggle to overcome the nightmare of her teenage years, her depression and her suicide attempts before turning to the authorities.

“I finally realized that nothing worse could happen to me and I chose the legal route,” she said.

Yannopoulos has also spoken of another young victim who said she was abused by her father since the age of seven.

She asked for help from the child welfare organization when she was 14 as her mother refused to report her husband, he said.

Sometimes, incest cases are only revealed after domestic violence complaints, he added.

“A young woman has called us to reveal that she was beaten by her parents. While talking to her, we learned that her father was sexually abusing her and that she thought this was normal,” he said.

But silence still reigns, Yannopoulos said, with few cases of incest being reported in Greece.

In 2020, out of 2,100 cases of domestic violence reported to the organization “only 31 had to do with sexual aggressions”, a number he believes greatly understates the problem.