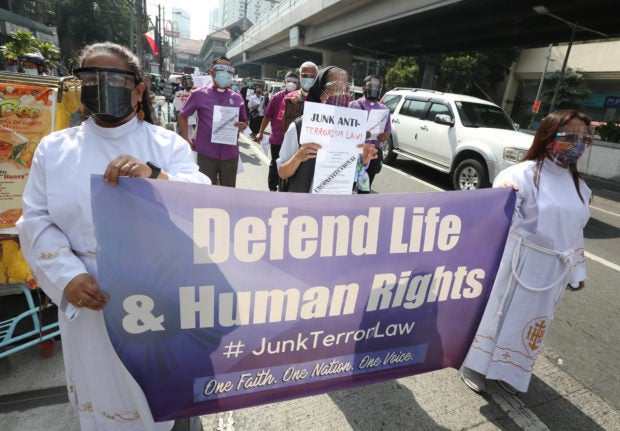 LOUDANDCLEAR As petitioners argued their case against the terror lawin last Tuesday’s oral arguments in the Supreme Court, members of religious groups say their piece with placards. The oral arguments resume on Tuesday. —MARIANNE BERMUDEZ

MANILA, Philippines — Petitioners challenging the legality of the antiterror law in the Supreme Court on Sunday said the arrest and jailing of two Aeta men after an encounter between soldiers and communist rebels in Zambales province would show how the government had abused implementation of the controversial law.

Bayan Muna Rep. Carlos Zarate, a member of the House Makabayan bloc and one of the 37 petitioners, said the case of Japer Gurung and Junior Ramos would “boost” their petitions questioning the constitutionality of Republic Act No. 11479, or the Anti-Terrorism Act of 2020.

Gurung and Ramos were accused of killing a soldier during a reported firefight between the military and rebels in San Marcelino, Zambales, last August.

They have denied the allegations, claiming they were trying to flee to safety when they were taken and allegedly tortured by Army soldiers from the 73rd Division Reconnaissance Company.

On Feb. 2, they filed their own petition in the Supreme Court, seeking to void the antiterror law while narrating their torture ordeal.

“Gurung was asphyxiated with cigarette smoke while a plastic bag was placed over his head, placed inside a sack and hung upside down, and ordered to eat his own human feces,” the petition read.

Zarate, in a text message to the Inquirer, said the Aeta case “is a boost and helps the petitioners show that indeed this terror law is being implemented and how the government is implementing it—which supports the original petitioners’ assertion that the law is dangerous to the Filipino people and clearly prone to abuse.”

Last week, Army Lt. Gen. Antonio Parlade Jr. said Inquirer.net reporter Tetch Torres-Tupas might be liable under the terror law for “aiding the terrorists by spreading lies” for reporting on the allegations of illegal arrest and torture made by the two Aeta men.

Parlade, the Southern Luzon Command chief and spokesperson for the National Task Force to End Local Communist Armed Conflict (NTF-Elcac), attacked Tupas on his Facebook page, saying she did not check whether her report on the two Aeta men was “true or fake” and called her a “propagandista.”

In response to a comment on his post, he said it would be “possible” to charge Tupas with “aiding terrorists by spreading lies” through her report.

They said the military official had made “clear threats” against press freedom enshrined in the Bill of Rights when he branded Tupas a rebel propagandist.

Parlade’s threat against the online journalist and other petitioners may be discussed during the continuation of the oral arguments in the Supreme Court on Tuesday, according to lawyers’ group National Union of Peoples’ Lawyers (NUPL).

“The Red-tagging of Parlade may also come out in the course of interpellations if the justices deem relevant or material in general or in particular,” said lawyer Edre Olalia, president of NUPL.

During the oral arguments on Feb 2., Associate Justice Marvic Leonen asked the lawyers if it was not too early to challenge the antiterror law, which was signed by President Duterte in July 2020.

He added that the court had already ruled in the past that “there must be a clear actual case” before it could intervene.

“Maybe the Aetas is the actual case,” Leonen said while grilling Alfredo Molo III, a professor of constitutional law at the University of the Philippines.

Sought for comment, lawyer Neri Colmenares, one of the oralists for the petitioners, told the Inquirer that the law is subject to facial review, citing the Supreme Court’s decision on Feb. 18, 2014.

“The Disini decision was a facial challenge without an actual case filed against petitioners, and yet the court voided provisions of the cybercrime law,” Colmenares said.

According to him, “the Imbong facial challenge versus the reproductive health bill also had no one being charged with RH law and yet the court voided provisions of the RH law.”

“This is a facial challenge which only seeks to invalidate a law on its face and not ‘as applied’ which requires a case. The Aeta case only bolsters the need for the court to resolve the issue because the constitutionality of the law is not only challenged on its face, but also, as applied,” he said.