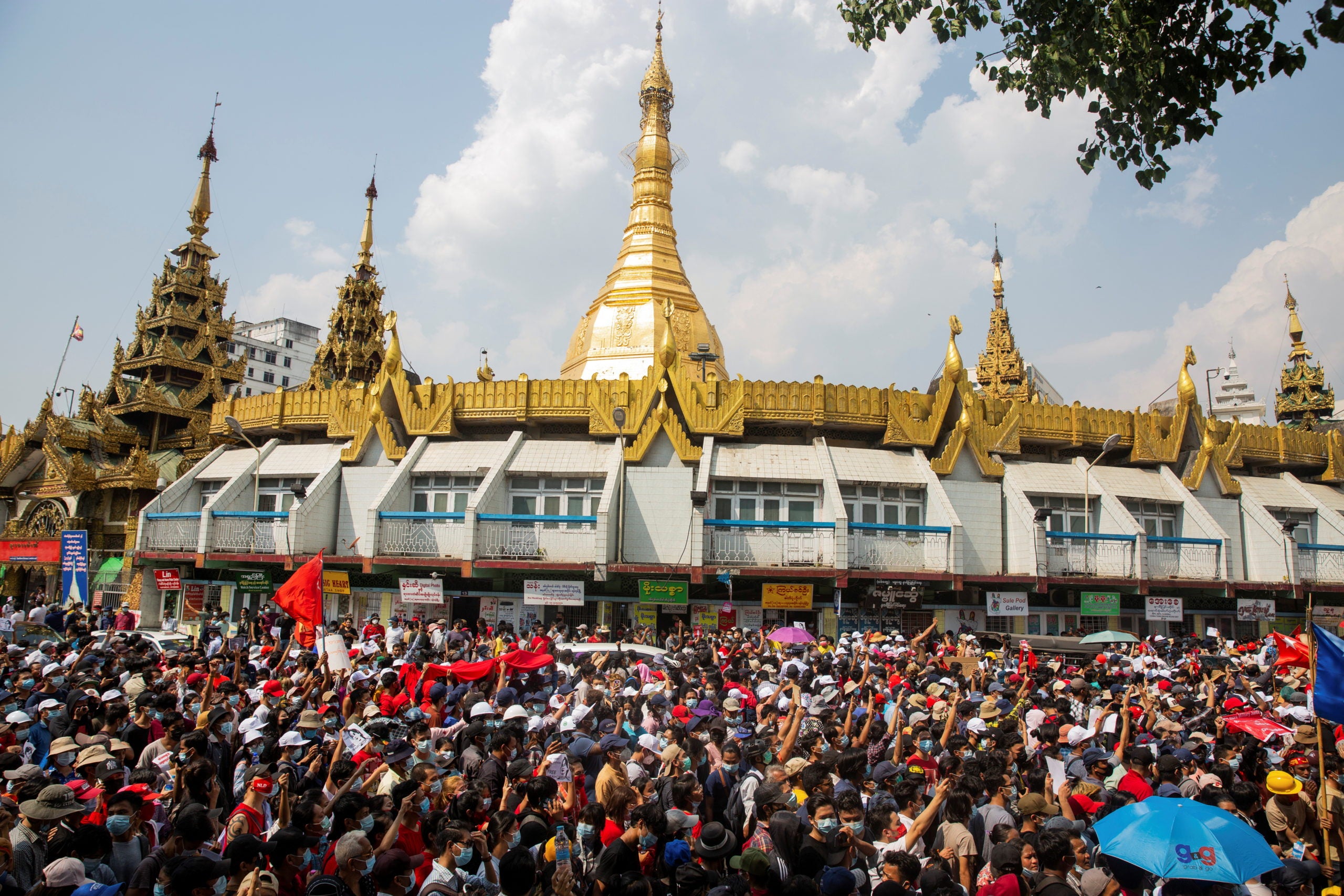 People rally in a protest against the military coup and demand the release of elected leader Aung San Suu Kyi, in Yangon, Myanmar, February 7, 2021. REUTERS/Stringer

Tens of thousands of people rallied across Myanmar on Sunday to denounce last week’s coup and demand the release of elected leader Aung San Suu Kyi, in the biggest protests since the 2007 Saffron Revolution that helped lead to democratic reforms.

“We don’t want military dictatorship! We want democracy!” they chanted.

On Sunday afternoon, the junta ended a day-long blockade of the internet that had further inflamed anger since the coup last Monday that has halted the Southeast Asian nation’s troubled transition to democracy and drawn international outrage.

Massive crowds from all corners of Yangon gathered in townships, filling streets as they headed towards the Sule Pagoda at the heart of the city, also a rallying point during the Buddhist monk-led 2007 protests and others in 1988.

A line of armed police with riot shields set up barricades but did not try to stop the demonstration. Some marchers presented police with flowers as a sign of peace.

Protesters gestured with the three-finger salute that has become a symbol of protest against the coup. Drivers honked their horns and passengers held up photos of Suu Kyi.

“We don’t want a dictatorship for the next generation,” said 21-year-old Thaw Zin. “We will not finish this revolution until we make history. We will fight to the end.”

There was no comment from the junta in the capital Naypyitaw, more than 350 km (220 miles) north of Yangon and state-run television news carried no mention of the protests.

An internal note for U.N. staff estimated that 1,000 people joined a protest in Naypyidaw while there were 60,000 in Yangon alone. Protests were reported in the second city of Mandalay and many towns and even villages across the country of 53 million people that stretches from Indian Ocean islands to the fringes of the Himalayas.

The demonstrations have largely been peaceful, unlike the bloody crackdowns seen in 1998 and 2007.

But shots were heard in the southeastern town of Myawaddy as uniformed police with guns charged a group of a couple of hundred protesters, the live video showed. Pictures of protesters afterward showed what appeared to be rubber bullet injuries.

“Anti-coup protests show every sign of gaining steam. On the one hand, given history, we can well expect the reaction to come,” wrote author and historian Thant Myint-U on Twitter.

“On the other, Myanmar society today is entirely different from 1988 and even 2007. Anything’s possible.”

With no internet and official information scarce, rumors swirled about the fate of Suu Kyi and her cabinet. A story that she had been released drew crowds out to celebrate on Saturday, but it was quickly quashed by her lawyer.

Suu Kyi, 75, faces charges of illegally importing six walkie-talkies and is being held in police detention for investigation until Feb. 15. Her lawyer said he has not been allowed to see her.

She won the Nobel Peace Prize in 1991 for campaigning for democracy and spent nearly 15 years under house arrest during decades of struggling to end almost half a century of army rule before the start of a troubled transition to democracy in 2011.

Army commander Min Aung Hlaing carried out the coup on the grounds of fraud in a Nov. 8 election in which Suu Kyi’s party won a landslide. The electoral commission dismissed the allegations of malpractice.

More than 160 people have been arrested since the military seized power, said Thomas Andrews, the United Nations special rapporteur on Myanmar.

“The generals are now attempting to paralyze the citizen movement of resistance – and keep the outside world in the dark – by cutting virtually all internet access,” Andrews said in a statement on Sunday.

“We must all stand with the people of Myanmar in their hour of danger and need. They deserve nothing less.”