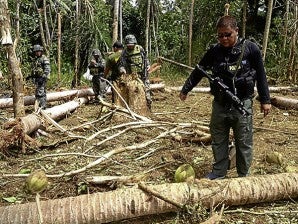 REMAINS TO BE SEEN. Members of the police special action force scour the bombed site in Jolo where 3 most wanted leaders of the Abu Sayyaf and Jemaah Islamiyah were among those allegedly killed in a US-backed dawn air strike on Thursday but can’t find their remains. Their identities have to be proven before informants get their reward. AP

Are they or aren’t they dead?

Even as the military has stepped up security in anticipation of retaliatory attacks by the Abu Sayyaf and other Muslim rebel groups after an air strike on a remote terrorist camp in Sulu killed 15 al-Qaida-linked extremists on Thursday, authorities are considering exhuming some bodies to prove the identities of the dead terrorist leaders.

“There is an effort to coordinate with local authorities for the cooperation of the relatives because we have to get DNA samples,” Burgos said.

He said given the amount of the bounty going to the informants, authorities may have to exhume some of the bodies to prove the identities of the terrorist leaders.

Doc Abu had a bounty of P7.4 million put up by the government on top of a $140,000 reward offered by the US State Department for his involvement in the May 2001 kidnapping in the Dos Palmas resort in Palawan province.

Marwan, the 29th most wanted personality by the US Federal Bureau of Investigation, carried a bounty of P7.4 million and $5 million for multiple counts of kidnapping. Mauwiya, a known JI contact, had a $50,000 bounty for his capture.

“We have already prepared for any probable retaliation,” Maj. Gen. Noel Coballes, commanding general of the Western Mindanao Command.

He said military units have already deployed forces to secure the “probable targets” of the terrorists.

He said even before the military launched the predawn operation on Thursday, military units were ordered to raise their security level in anticipation of revenge attacks.

“We alerted all our troops even before the execution of the plan. We (informed) our commanders of the probable repercussion or probable retaliation of other groups,” Coballes said.

Coballes said the Abu Sayyaf has splintered into many “terrorist cells” which may be capable of staging attacks.

“Definitely it’s a big loss to the terrorist organization. Marwan is considered one of the heads of the JI in Asia while Doc Abu is an icon in the Abu Sayyaf Group. They look up to him,” he added.

But a day after announcing that the top regional terrorist leader had been killed, the military on Friday said that troops on the ground were still combing the remote terrorist jungle camp that was bombed on Thursday for Marwan’s body.

The reported killing of Marwan, a bomb-making expert and one of the United States’ most wanted terrorist suspects who had been hiding out in Mindanao since 2003, would mark a major success in disrupting the JI terrorist network blamed for some of the most spectacular terrorist attacks in Southeast Asia in recent years.

“We are still searching. Our troops are still there,” said Lt. Col. Randolph Cabangbang, spokesperson of the Western Mindanao Command based in Zamboanga City, where the bomber planes in Thursday’s strike took off.

Military officials dismissed doubts that the three top terrorist leaders had been killed even though their bodies were not recovered, saying comrades removed the dead after the strike.

Cabangbang said the military’s announcement of Marwan’s killing was based on information provided by informants. He refused to elaborate, saying it would compromise their intelligence assets.

Cabangbang suggested that the blast could have “obliterated” Marwan’s body, saying the process of verification linked to the possible disbursement of the reward money to informants will be “more tedious” and could include DNA testing.

Two security officials with knowledge of the air strike who spoke to the Associated Press also said Marwan’s body was not found, though bombs shattered the house where he was believed to have been.

One of the officials confirmed the deaths of the other two high-level leaders—Umbra Jumdail and Abdullah Ali. The other official confirmed only the death of Jumdail, also known as Abu Pula, and his son.

Both officials spoke on condition of anonymity because they were not authorized to talk to reporters.

Cabangbang said the decision to announce the killings, including that of Marwan, was made by Armed Forces Chief Gen. Jessie Dellosa, after he was briefed by commanders.

“There are details that we cannot divulge because of operational security,” he said when pressed for details.

Interior Secretary Jesse M. Robredo on Friday said police scene of the crime operatives have taken samples from the bodies at the site of the air strike which he said would be used for DNA confirmatory testing of the identities of the three most wanted Southeast Asia terrorist leaders.

But Robredo stressed that “from the information gathered from the locals on the ground, there is reasonable certainty that the terror personalities were really the ones who were killed.”

He said crime scene specialists had some difficulty in retrieving samples. “The bodies were in such a state that it might be difficult to account for all of them,” he said.

Asked how the authorities could ascertain the body count considering the condition of the bodies, Robredo said the information had come from the locals. The names of the 12 others killed in the strike were still not available.

Robredo said he expected the police and the military to coordinate with international authorities, including those from the United States, which has a stake in counterterrorism efforts in the Asia-Pacific region, as well as Southeast Asian neighbors Malaysia, Singapore and Indonesia.

“Terrorism is an international matter, so we will appreciate whatever assistance we will get from them,” he said.

Robredo said he still had no information on who would get the reward money offered for the capture and information on the terrorist leaders. But he believes a group of government informers will be amply rewarded once documentation is finished.

The military on Friday identified eight more of the 15 slain extremists. It said one of them was the son of the slain Umbra Jumdail and another Malaysian member of the JI.

Burgos said intelligence sources said one of those slain used the alias Jumong and was one of the six Malaysian JI operatives who reportedly slipped into the country last December.

He said three remains have been identified as belonging to Moammar Jumdail alias Ting, who was reportedly the son of Umbra Jumdail, and Abu Sayyaf members Tati Jamhali and Tuan Nash Lipaetif.

Burgos said three others were also identified as Abu Sayyaf members who were known only as Leong, Teng Muin and Julpe.

The head of the Bantay Ceasefire in Sulu on Friday said some civilians and a Bangladeshi national identified only as Mastal were among those killed in the Parang air strike.

Octavio Dinampo, of the Mindanao State University in Sulu province, said the information was relayed to him by a relative of Doc Abu.

“Doc Abu was attending to a wounded patient in a makeshift clinic in Lanao Dakulah when four bombs were dropped, killing him and one Bangladesh national identified as Mastal and some civilians residing in that area,” Dinampo said.

It was not clear what the Bangladeshi was doing in Parang or who the civilians were. With reports from AP, AFP and Julie Alipala, Inquirer Mindanao