Sasmuan is haven for birds, mangroves

SASMUAN, Pampanga —Jayson Salenga, one of the country’s two youth ambassadors for wetlands, has reason to be happy that his hometown Sasmuan in Pampanga province dropped its Spanish name, Sexmoan, by way of legislation in 1991.

The association with sex—unintended due to pronunciation and spelling—was removed when Congress passed Republic Act No. 6976, through the support of then Pampanga Rep. Emigdio Lingad.

It reverted to the precolonial name Sasmuan, which was derived from “sasa,” or nipa palm, and “pitabuan,” or where the chieftains of the old Kingdom of Baba (the present-day Lubao town) met.

So when British singer Tom Jones’ “Sexbomb” topped the music charts in 1999, Salenga said Sasmuan had only its fresh seafood to be proud of; no more sex joke to worry about.

“The change of name distinguished Sasmuan as a coastal wetland,” Salenga, also the town’s tourism officer, told the Inquirer.

Its importance was solidified on Feb. 2 after the nearly 4,000-hectare Sasmuan Pampanga Coastal Wetlands (SPCW) was designated a “wetland of international importance” under various criteria of the Ramsar Convention, a treaty by 171 countries that committed to protect wetlands as sources of fresh water and other resources.

The designation of SPCW as Ramsar Site 2445 was in time for the 50th year of the convention, which was enacted in Ramsar, Iran, in 1971.

The SPCW passed four of nine criteria, according to Paquito Moreno Jr., executive director of the Department of Environment and Natural Resour­ces (DENR) in Central Luzon. 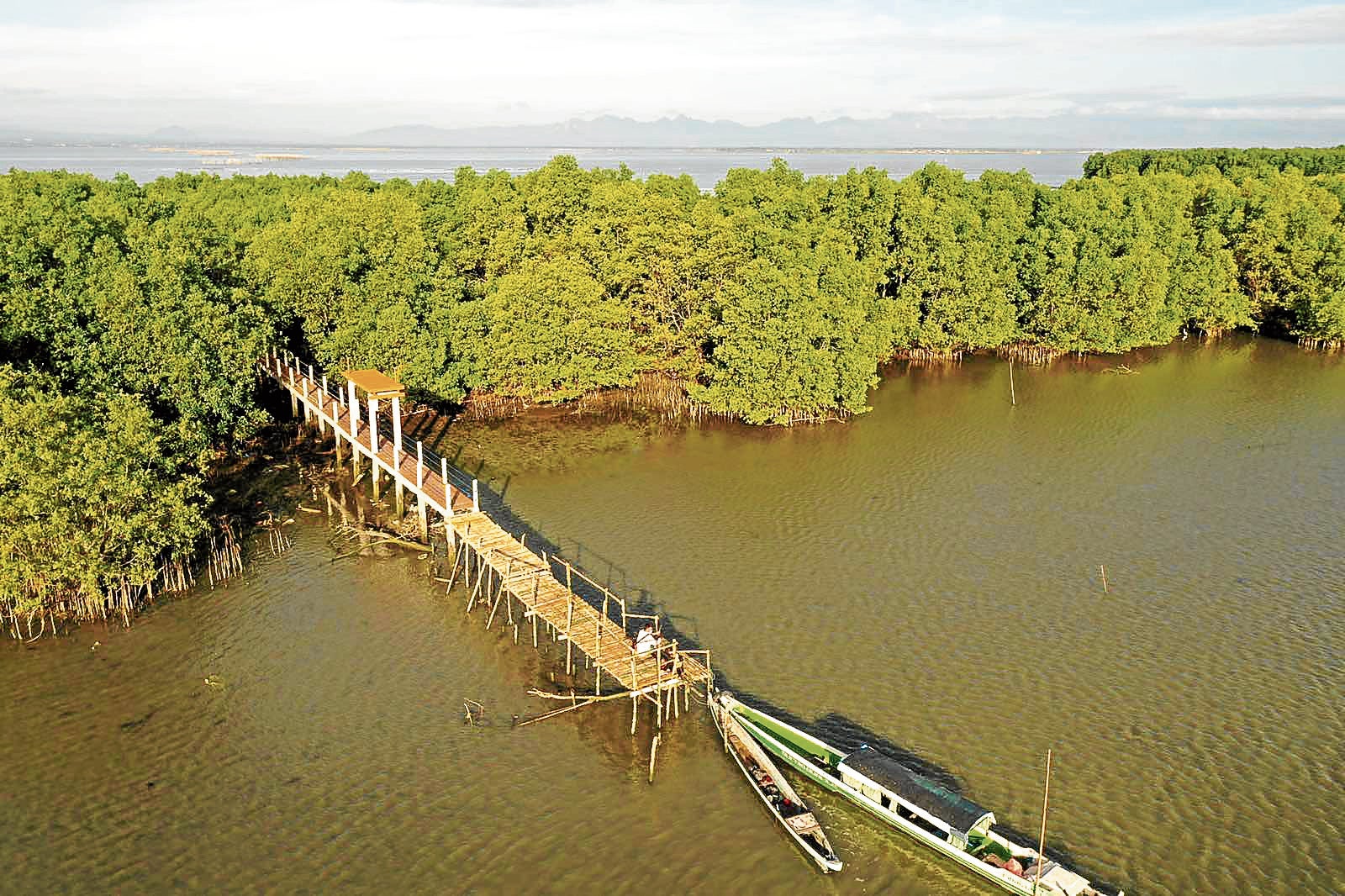 On its website, the Ramsar Convention secretariat said SPCW served as “important stopover points” for migratory waterbirds on the East Asian-Australasian Flyway.

The January 2021 Asian Waterbird Census showed SPWC as a thriving home. The census counted 80,000 migratory birds from 63 species, according to Laudemir Salac, head of the DENR in Pampanga.

The Ramsar website said “aquaculture ponds co­ver large parts of the site, helping to support local livelihoods.” But disputes over land and water do occur, evident in several signs that warn against trespassing. 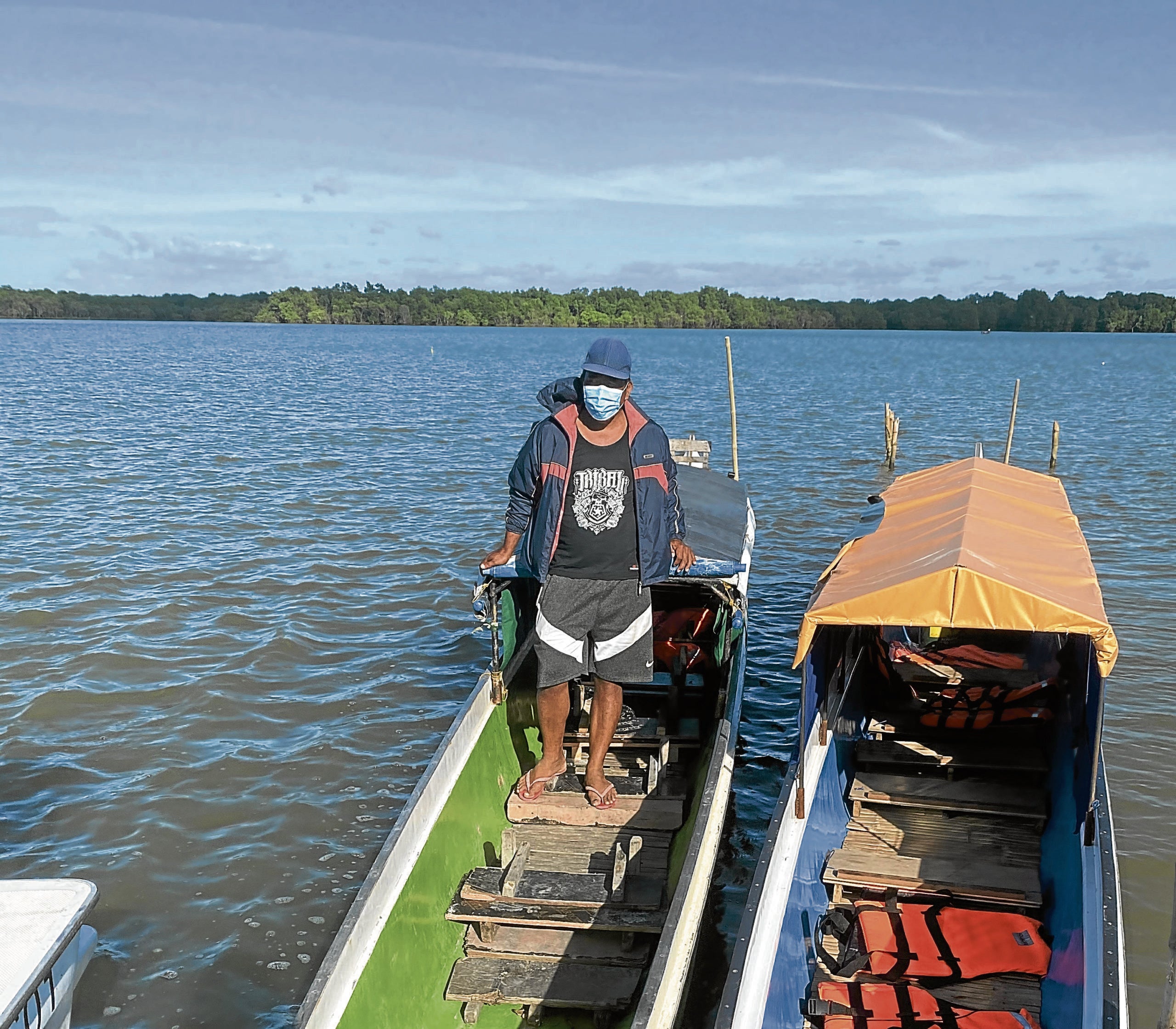 GUIDING TOURISTS Genaro Mercado, when he is not out fishing, uses his boat to bring tourists to Sasmuan’s coastal attractions. —TONETTE OREJAS

But 52-year-old fisherman Genaro Mercado has a vague sense of the Ramsar Convention. He has yet to grasp how being a Ramsar site will affect his village, its environment or his own family.

The Bangkung Malapad, a wide patch of mangroves far down his village of Sebitanan, is the closest thing that can get Mercado to understand how the preservation of wetlands can support people. It is officially called the Sasmuan Bangkung Malapad Critical Habitat and Ecotourism Area.

Before the COVID-19 pandemic struck in March last year, Mercado earned P2,500 from tourists who rented his boat for a two-way ride to Bangkung Malapad. Back then, he averaged five round trips a month.

Mercado also observed an increase in his weekly catches of crabs and shrimps just outside Bangkung Malapad. The 405-ha mangroves strip is the heart of the 3,667-ha SPCW, Salac said.

Batang Dos is the nearest village to Bangkung Malapad, which older residents called Pulong Malapad, a wide mudflat that could be seen when the tides of Manila Bay were low, barangay chair Amanda Guevarra-Coronel said. 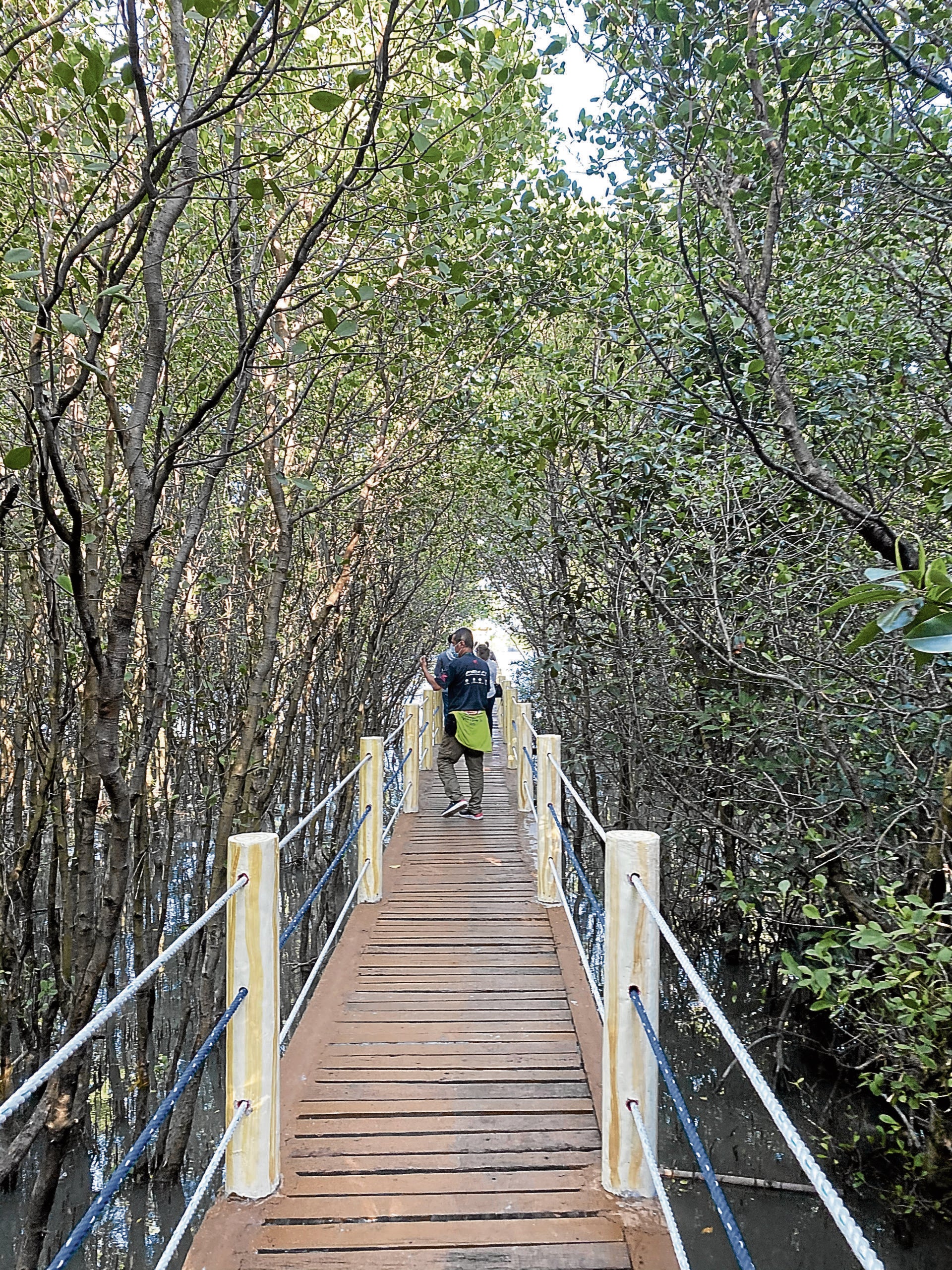 “I was a barangay health worker back in the day. In the times of three previous mayors after Mt. Pinatubo erupted [on June 15, 1991], we always plan­ted mangroves. Department of Agriculture and DENR workers always helped us,” she recalled.

Salac said rain washed down Mt. Pinatubo’s ash, sand and mud from the slopes to the Pasac River, and accumulated at the mouth of the bay, making it hospitable for mangroves, plants, birds and aquatic life.

Coronel said mangroves reforestation should be done in the SPWC because mangroves are not only spawning grounds for fish or refuge to migratory and local birds.

“In many times, the mangroves protect our village from strong winds. That is also a reason why we protect the mangroves,” she said.

Salenga said the local government had banned “bonbon,” or the use of mangroves branches as artificial reefs.

The local government has also established a 5-ha mangroves nursery and 5-ha fish sanctuary in Barangay San Antonio in 2016.

“Protecting and maintaining a Ramsar site is not an easy and simple task. We have to raise awareness. We have to help them sustain practices that do good to the environment and help them stop bad practices,” Salenga said. 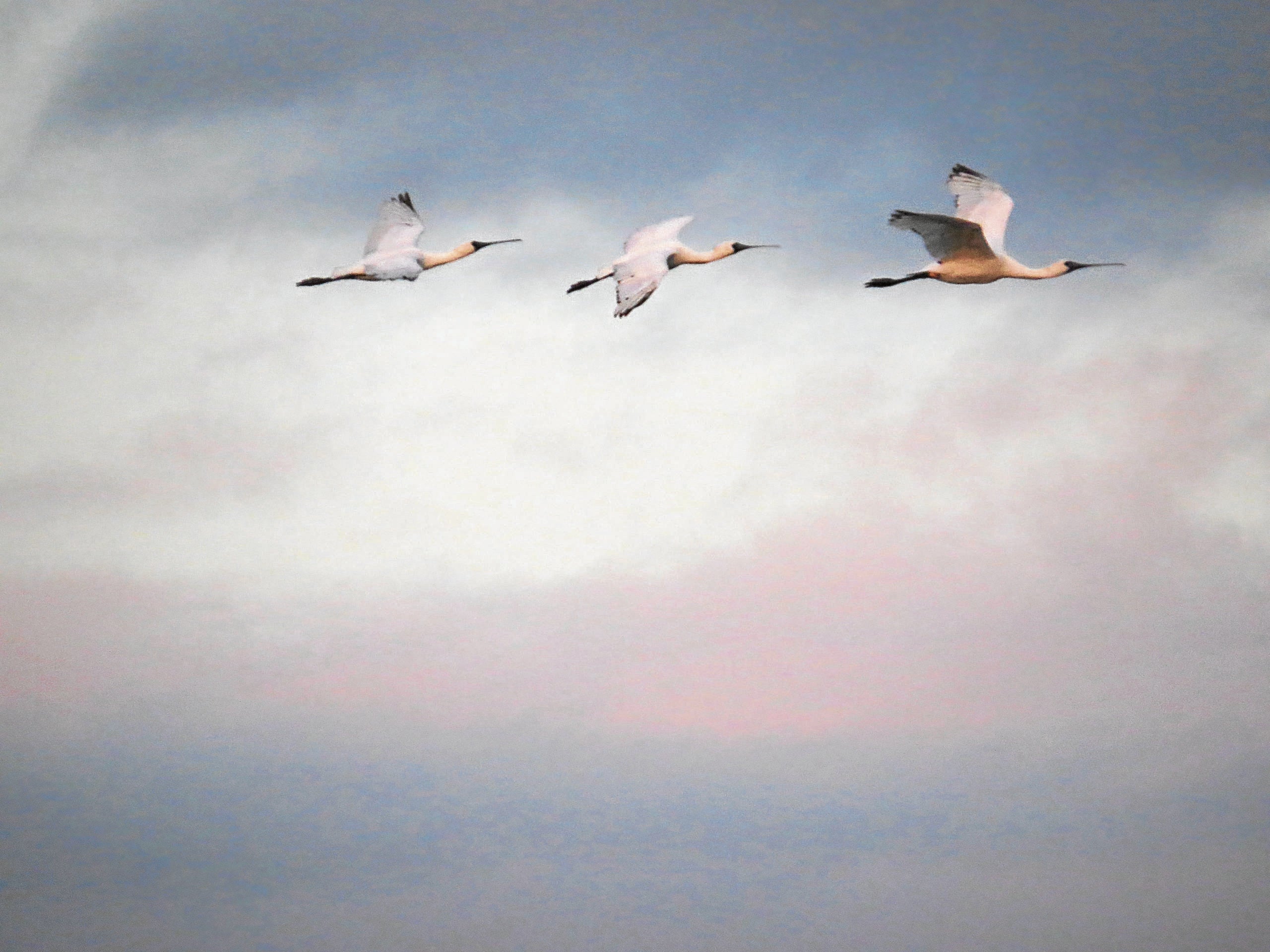 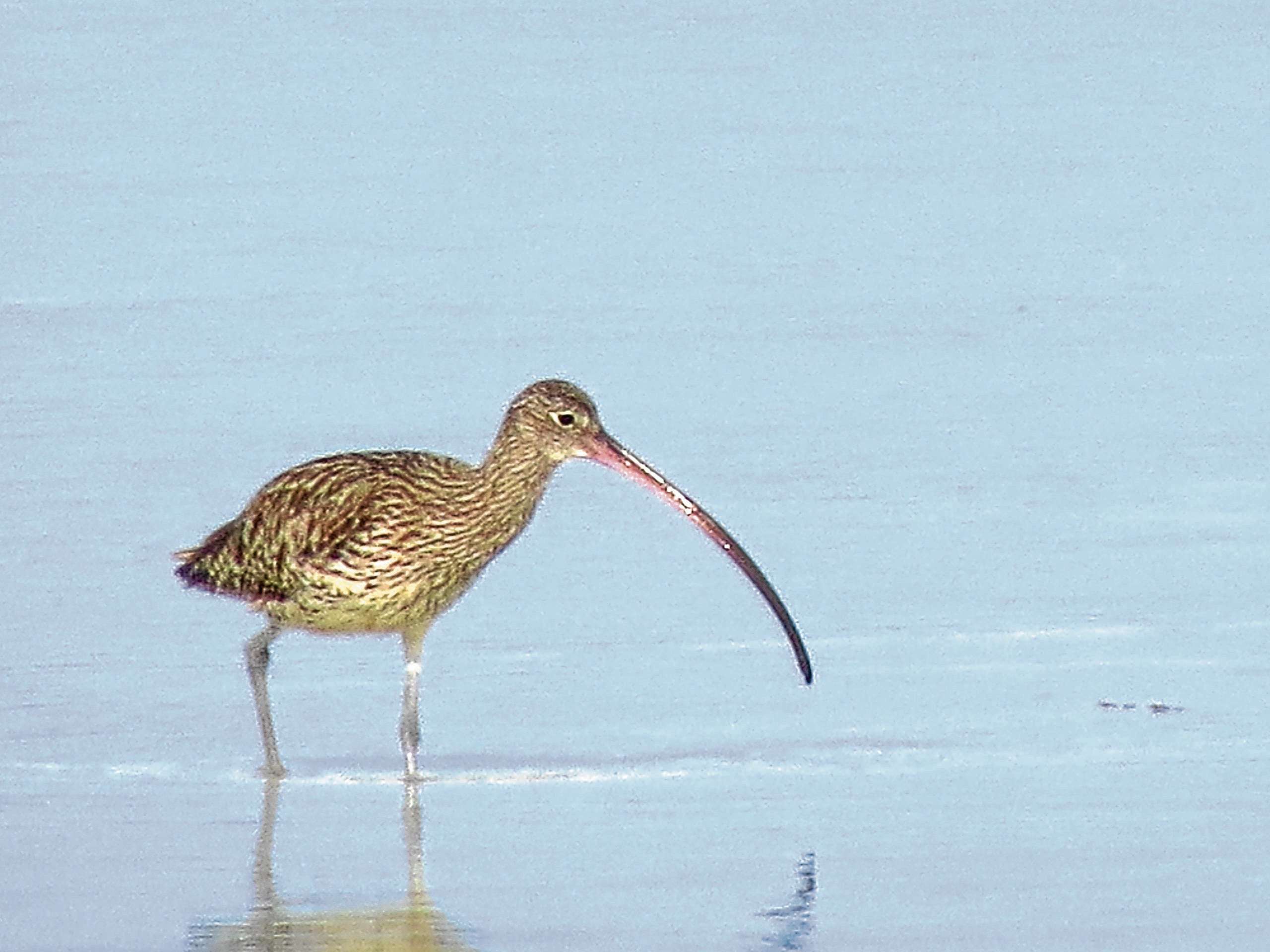 Salac said the other ways of enforcing environmental laws and reporting on conservation work would be discussed in village meetings.

Candaba Mayor Rene Maglanque said he was interested in making the Candaba Swamp a Ramsar site because it hosts many species of migratory birds.

Swamp areas that cross the borders of the provinces of Pampanga, Nueva Ecija and Bulacan are mostly privately owned, making enforcement a big challenge, Salac said.

The designation of SPCW as a Ramsar site was endorsed by the DENR’s Biodiversity Management Bureau ahead of World Wetlands Day on Feb. 2.

After the Philippines committed to the Ramsar Convention in 1994, the country now has eight wetlands of international importance covering 247,864 ha.

Also on the list are the Olango Island Wildlife Sanctuary in Cebu province, Puerto Princesa Subterranean River National Park and the Tubbataha Reefs Natural Park, both in Palawan province.

According to Martha Rojas Urrego, secretary-generalsa of the Ramsar Convention, the world is “in a water crisis with profound consequences and wetlands are at the heart of its resolution.”

Less than 1 percent of water on earth is usable fresh water and is mostly stored in wetlands, such as rivers, streams, lakes, marshes, estuaries and aquifers, she said.

“We consume at least 10 billion tons of fresh water daily—more than the earth can replenish. Yet, we will require 55 percent more water by 2050 for a global population of 10 billion people,” Urrego said on the Ramsar website.

According to her, “significant investments are required in wetlands as natural solutions for water management, as well as enacting policies that integrate wetlands into management plans.”

“All are decisive actions, toward a green economy and paramount to building back better,” Urrego said.