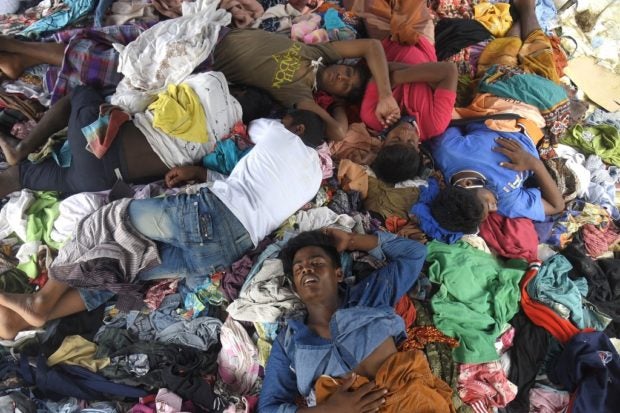 (FILE PHOTO) This picture taken on September 8, 2020, shows a group of Rohingya men sleeping on a pile of donated clothes at a transit camp after nearly 300 Rohingya migrants came ashore on the beach in Lhokseumawe on the northern coast of Indonesia’s Sumatra island. – When hundreds of Rohingya paid traffickers to escape their squalid refugee camp in Bangladesh earlier this year they were promised they were just a week away from a new life in Malaysia. Instead, the group of mostly women and children suffered more than 200 days of terror on the high sea until they landed this week on Indonesia’s northern coast. (Photo by Rahmat Mirza / AFP)

Kuala Lumpur, Malaysia — Dozens of Rohingya, mostly women and children, were caught as they arrived by boat in Malaysia last month after fleeing a refugee camp in neighboring Indonesia, police said Friday.

Almost 400 members of the persecuted Muslim minority from Myanmar arrived by boat in Indonesia last year after perilous journeys, and just over 100 now remain at a camp there.

Many are believed to have enlisted traffickers to help them make the sea crossing, including women seeking to reunite with their husbands in the Southeast Asian country.

Police confirmed to AFP that a boat carrying 36 people — 31 Rohingya and five Indonesians — was intercepted as it landed on Malaysia’s west coast on January 6.

“They entered Malaysia by boat from Tanjung Balai (on Indonesia’s Sumatra island) and landed at a beach,” said Abdul Rahim Jaafar, the director of internal security at the Royal Malaysia Police.

News of the boat landing tallies with accounts from Rohingya at the camp in Indonesia, who told AFP this week that scores of women had been smuggled to Malaysia.

While some were caught, others are believed to have successfully entered the country and reunited with their spouses, according to Rohingya and human rights groups.

Almost one million Rohingya live in sprawling camps in Bangladesh, many of which were set up after a bloody crackdown by Myanmar’s military in 2017 drove them into the impoverished South Asian country.

Over the years, many have sought to flee by boat to Malaysia, enduring harrowing, months-long sea journeys punctuated by illness and beatings.

More than 100,000 Rohingya live on the margins of society in Malaysia, registered as refugees but not allowed to work, forcing them into illegal construction and other low-paid jobs.

Read Next
2 soldiers killed, 1 wounded in second clash with NPA in a day in Quezon
EDITORS' PICK
Tired of your Wi-Fi signal problems at home? Here’s a solution!
Must-know scams to avoid when buying cars
Average new COVID-19 cases daily in NCR down 30%
POVA x Mobile Legends Bang Bang: A partnership that’s built to win
Patients evacuated as fire hits PGH
Concepcion: Consider vaccine passes once herd immunity reached in NCR Plus
MOST READ
Patients evacuated as fire hits PGH
Mikey Garcia ‘not getting hopes up’ as Pacquiao fight yet finalized
Go pushes bill seeking creation of Center for Disease Control and Prevention
Dave Bautista on his Filipino grandfather, living with regret and being around superheroes and zombies
Don't miss out on the latest news and information.