In Baguio, trees give way to road projects

BAGUIO CITY—The Department of Public Works and Highways (DPWH) is cutting at least 28 trees to make way for five road expansion projects to ease traffic flow in the city, sparking outrage among residents and netizens.

Reyes said the move underwent proper procedures. “However, our engineers are always looking for ways to adjust so we can avoid damaging [some of the] trees,” he told the Inquirer on Thursday.

According to him, 15 of the trees are along Marcos Highway while four are on Kennon Road’s Camp 7 village. The others are on Fr. Carlu Loop near Baguio Cathedral and along Bonifacio Street. 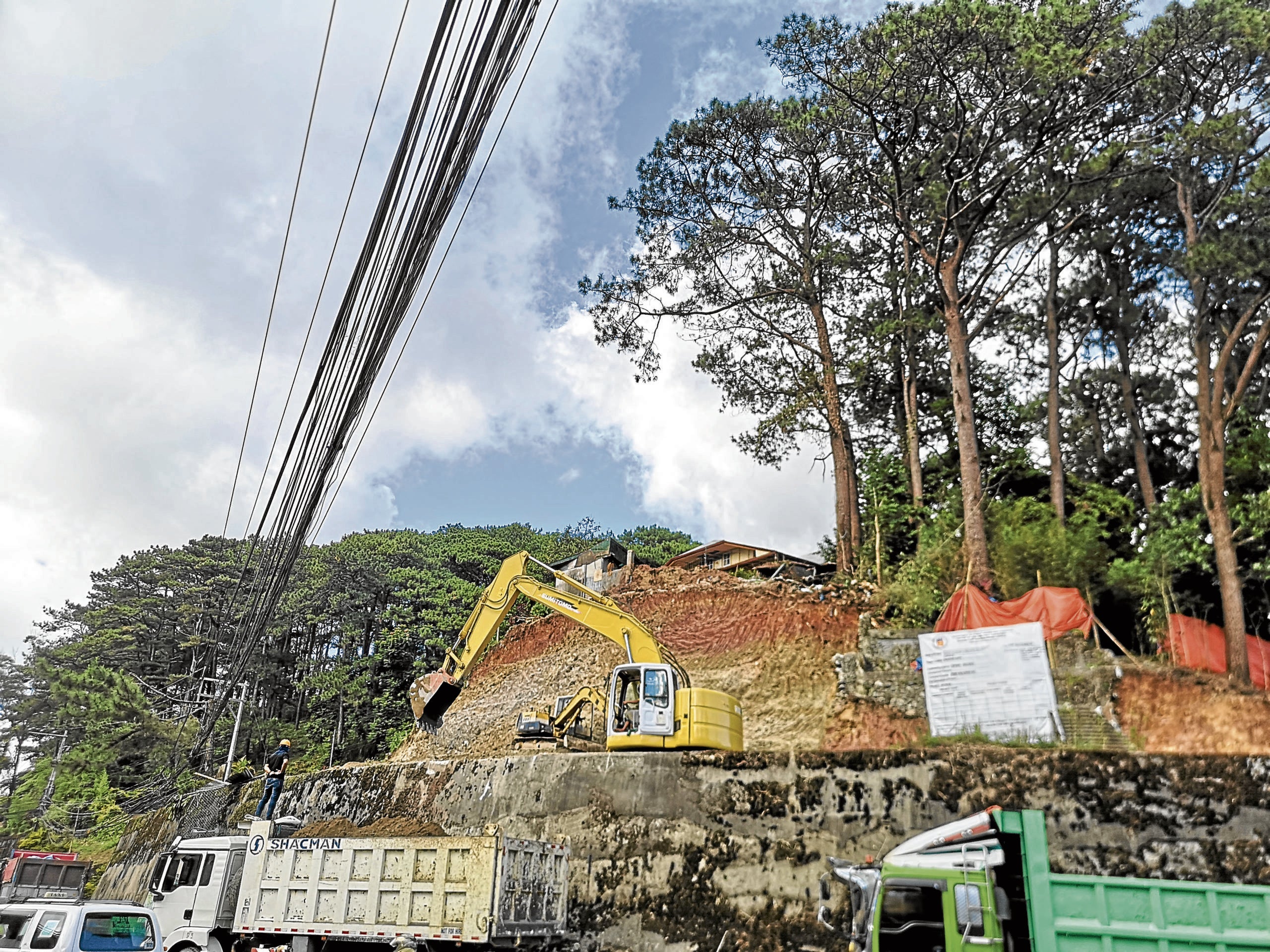 TRAFFIC SOLUTION A section of the retaining wall, including several trees, will be removed from the compound of Mount Peace Retreat House, a retirement home for Catholic priests, to ease traffic flow in an area where Baguio City-bound vehicles coming from Kennon Road and Marcos Highway converge. —EV ESPIRITU

The DPWH originally asked for permits to cut 31 trees, all of which were approved by the city government, but the number and conditions regarding their replacements were still being worked out by the Department of Environment and Natural Resources (DENR).

As of Thursday, the district engineering office had decided to spare three old trees along Fr. Carlu Loop near Catholic Bishop’s House, reducing the number to 28, Reyes said.

Eight trees had been removed when work began last year to move back the concrete wall fronting a flyover along Marcos Highway near Baguio General Hospital and Medical Center.

The 8-meter-high barrier of the forested Mount Peace Retreat House, which connects to a Catholic church’s retirement home for priests, was moved back by 12 m to widen Governor Pack Road, which vehicles from Metro Manila use to reach the city center.

Some trees along Kennon have been leaning toward the highway and have become a danger for motorists and pedestrians, Reyes said. 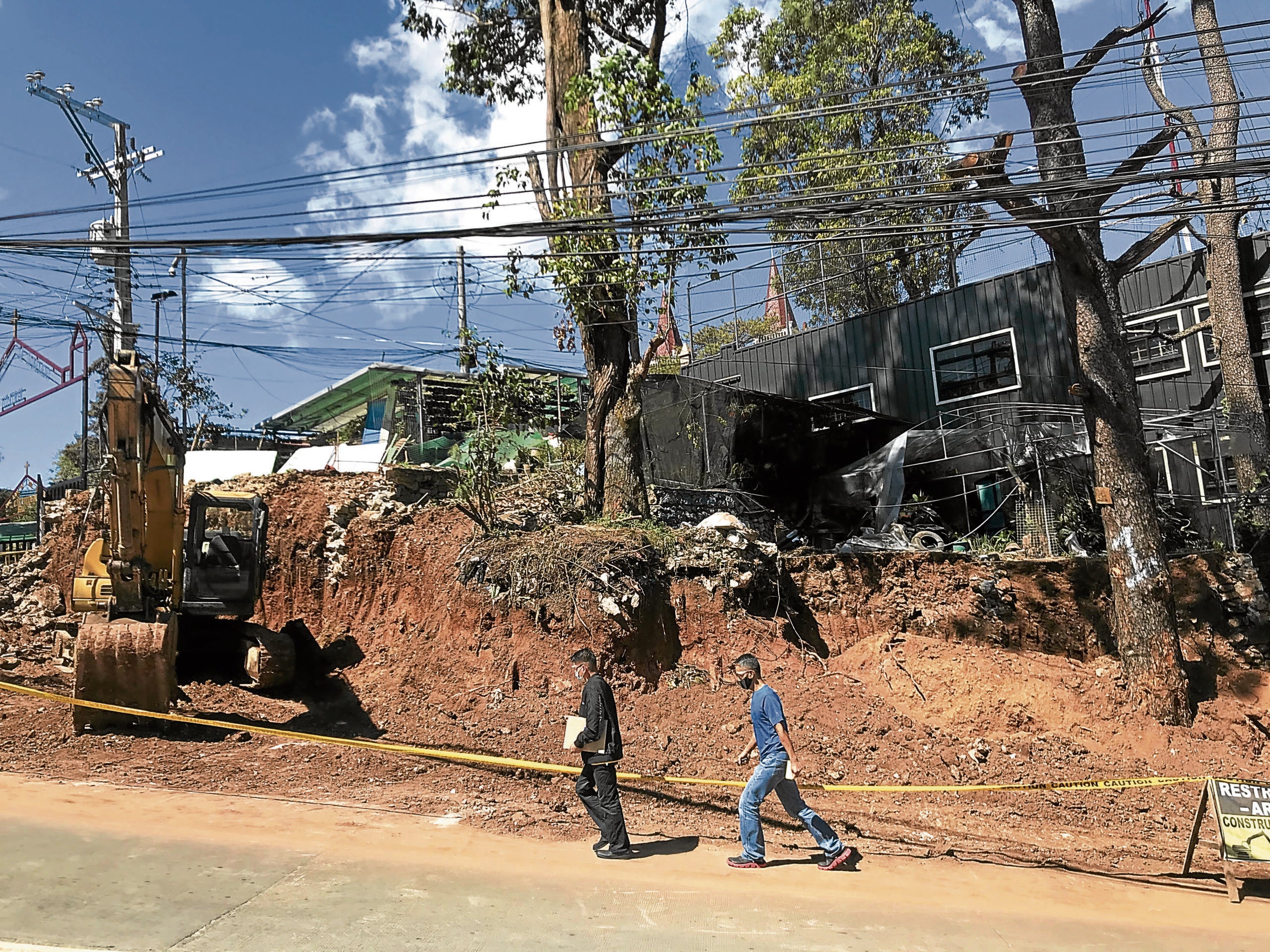 STILL STANDING Trees near Baguio Cathedral have been spared from a road widening project in this busy section of Baguio City. —VINCENT CABREZA

In 2019, Mayor Benjamin Magalong embarked on a Baguio redevelopment plan, which included protecting its remaining 2.5-million tree population based on an estimate of the DENR.

At the time, he proposed a one-year moratorium on tree-cutting and all construction activities. Baguio also has an ordinance that penalizes anyone for harming its pine trees.

But the latest tree-cutting activities have stirred outrage among residents and on social media, citing the environmental impact of the city’s thinning tree cover.

“All the disasters and tragedies we are experiencing today are somehow connected to the destruction of nature. Look at the recent flood in Cagayan, the flood in Marikina? Have we still not learned our lesson?” a resident asked on social media.

Others slammed the move, saying the city was pushing for infrastructure development but had supposedly “neglected taking nature into consideration.”

Another said, “I thought that a moratorium [on tree-cutting] was passed by Congress,” referring to the 10-year-moratorium proposed by Baguio Rep. Marquez Go but still pending in the House of Representatives.

City officials would ask the DPWH to allow the local government to replant trees along its streets as part of its reforestation plan, said Rhenan Diwas, city environment officer.

The plan requires the development of pocket parks and inner city roads lined with trees.