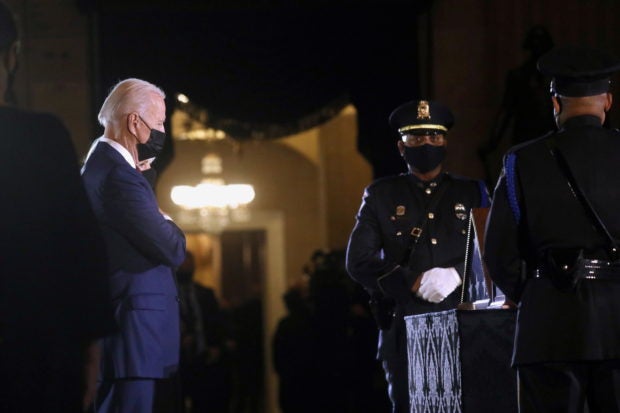 U.S. President Joe Biden and first lady Jill Biden pay their respects to U.S. Capitol Police officer Brian Sicknick, who died on January 7 from injuries he sustained while protecting the U.S. Capitol during the January 6 attack on the building, as he lies in honor at the U.S. Capitol in Washington, U.S., February 2, 2021. REUTERS/Leah Millis/Pool

WASHINGTON  – President Joe Biden told congressional Democrats on Wednesday he would not back down on including $1,400 checks for struggling Americans in his COVID-19 relief plan but would consider tighter limits on who gets them, lawmakers and aides said.

Biden held a conference call with House of Representatives Democrats and talked with Democratic senators at the White House as the party prepared to use a procedural maneuver to push Biden’s $1.9 trillion coronavirus relief package through without Republican votes if necessary.

“We did have a conversation about the direct payments and how those might be modified in a way to ensure they’re targeted,” Senator Chris Coons, a Democrat from Biden’s home state of Delaware, said as he left the White House Wednesday morning.

Biden has made addressing the heavy human and economic toll of the coronavirus pandemic, which has killed more than 447,000 Americans and thrown millions out of work, a key focus of the early weeks of his administration.

Biden and the Democrats agreed on the need to move swiftly to get $1,400 stimulus checks to Americans, White House spokeswoman Jen Psaki told reporters.

She said Biden and Senate Democrats also agreed to make the process as bipartisan as possible, for a plan that also includes money for vaccines and additional unemployment benefits. But Republicans have balked at the $1.9 trillion price tag, particularly after the $4 trillion in COVID-19 aid passed last year.

Biden might win over some Republicans if he makes modifications, but if there are no changes, Senator Mitt Romney said Wednesday, “I would predict not a single Republican will support the $1.9 trillion plan.”

Romney was among 10 moderate Republican senators who met Biden on Monday and whose counter-proposal on COVID-19 aid amounts to about a third the size of the president’s plan.

Biden’s proposal mirrors income requirements in previous COVID-19 bills that would provide payments to individuals making up to $75,000, and couples $150,000, a year.

When Psaki on Tuesday was asked to draw some lines on where Biden stood on the stimulus checks, she offered an example of a couple, a nurse and a teacher, making $120,000 and said under the Biden plan, they would get a stimulus check, but not under a plan by Republican senators.

Congressional Democrats on Tuesday took their first steps to fast-track the massive aid package, voting in both chambers to open debate on a spending resolution that would give them a legislative tool called “reconciliation” to pass the relief without Republican support.

“We must go big and bold …We are united as one for a big, bold package, working with our Republican friends when we can,” Schumer said Wednesday after he and several other Senate Democrats met Biden at the White House.

But Senate Republican Leader Mitch McConnell criticized the Democrats’ decision to press ahead with a framework that allows the eventual COVID-19 relief bill to pass with a simple majority, calling it a “partisan jam”.