Child car seat law: Cost not the only issue 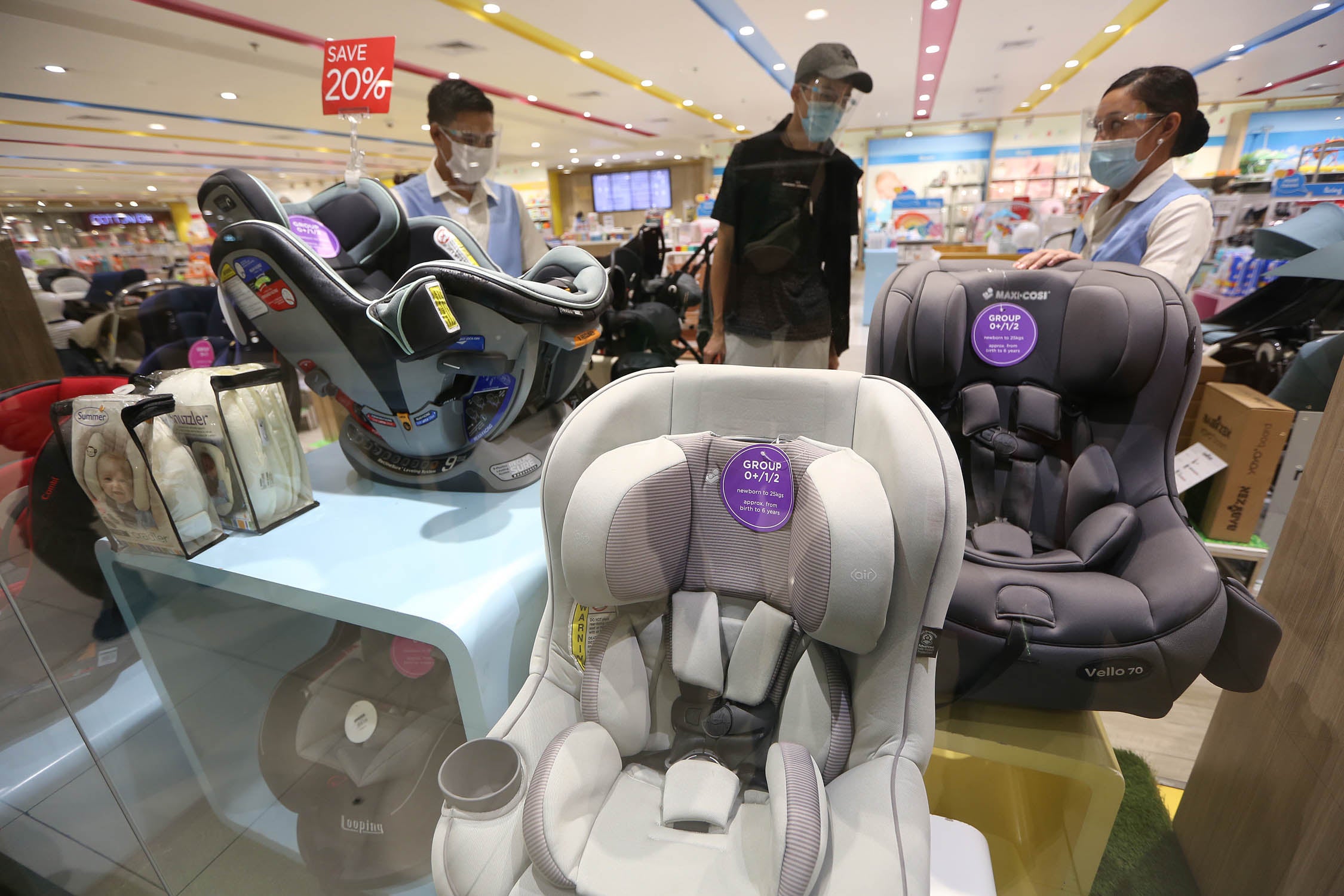 VALUE FOR MONEY Car owners check out car seats for their young children, looking for the best value for their money, as the government begins to implement this week a 2019 law requiring child restraints inside vehicles to protect them during road accidents. Penalties for violators will not be imposed during a three- to six-month period during which transport officials will undertake an information campaign on the need for special seats for children. —NIÑO JESUS ORBETA

MANILA, Philippines — When the child car seat law took effect this week, public school teacher Anj Ela Cabal had to look for child restraint systems (CRS) for her three kids, but she found that they were too pricey and would be an additional financial burden on middle-class families like hers who were dealing with tight home budgets during the pandemic.

Cabal, 32, who lives with her family in Botolan town in Zambales province, said she was surprised by the CRS prices that she saw on a popular online shopping app, ranging from P3,500 to P7,000. Others were cheaper but they were the portable kind that would not be practical in the long run, she said.

Top brand CRS manufactured overseas are even more expensive, selling online for as much as P25,000.

Under Republic Act No. 11229, or the Child Safety in Motor Vehicles Act, a child that is taller than 149.86 cm is exempted from using a CRS and may be secured using the regular seat belt.

“They’re too expensive, especially now that we’re in a pandemic,” Cabal said. “Daily survival is already a challenge. This is really an additional financial burden since essential goods are already too expensive.”

How to keep price down

According to a 2017 study by the Institute of Health Policy and Development Studies at the University of the Philippines Manila, the average price of a child car seat in the country is P5,000, which it said may be too steep for middle class families.

The study said the law “should be considerate of the socio-economic situation in the country,” especially of parents whose income may not allow spending a lot for child car restraints.

“Prices should be driven down by increasing the number of players in the supply and distribution of child restraints in the Philippines,” it noted.

Supporting rental services, offering coupons and partnering with car companies to bundle car purchases with CRS can also be considered by the government to decrease the prices of child restraints, according to the study.

The study also noted that the majority of child restraints available on the market “did not have certification classifications or markings with the child restraint photos provided or the information laid out.”

That’s why Cabal and her husband decided to not immediately buy child car seats and to look for models that meet the safety standards set by the government.

The use and sale of substandard CRS are also punishable under the new law.

In a press conference last week, lawyer Daphne Marcelo of public interest group ImagineLaw explained that there were specific types of child restraints, depending on the child’s height and weight.

These specifications are in accordance with the United Nations Regulations 44 and 129 on the acceptable international standards for child restraint systems, which the law mandates the Department of Trade and Industry to follow.

The law was supposed to be implemented starting Feb. 2, but transportation officials said that because of the pandemic they would not penalize violators for the next three to six months while the government undertakes an information campaign about the measure.

At the House of Representatives, Muntinlupa Rep. Ruffy Biazon said that while the full implementation of the law was being deferred, its implementing rules and regulations (IRR) should be reviewed.

Biazon, a member of the House transportation committee, said there were provisions in the implementation rules that went “beyond the scope and authority” of the law which added to the “confusion and apprehension” about the measure.

He cited one provision dealing with “fitting stations,” saying that the process of accrediting them may give rise to corruption “due to the exercise of discretion by accreditors.”

In the first place, the law “does not mention the creation of fitting stations,” Biazon said.

The purpose of such establishments also was vague as to whether motorists would need to have their child car seats evaluated and approved by a fitting station before they could be installed in a vehicle, he said. —WITH A REPORT FROM NESTOR CORRALES