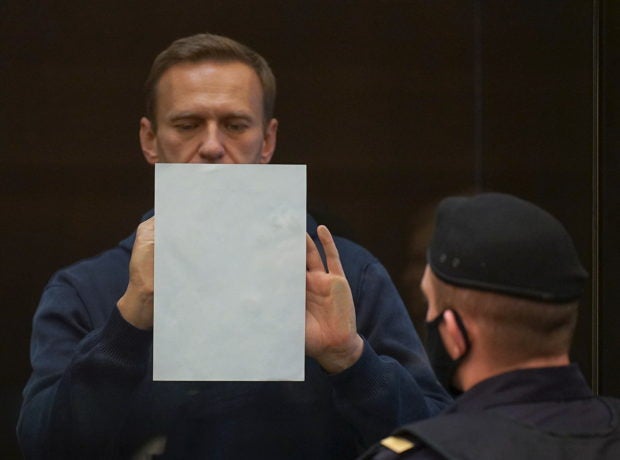 Russian opposition leader Alexei Navalny, accused of flouting the terms of a suspended sentence for embezzlement, writes inside a defendant dock during a court hearing in Moscow, Russia February 2, 2021. Press service of Moscow City Court/Handout via REUTERS

MOSCOW — A Russian court jailed Kremlin critic Alexei Navalny on Tuesday, ignoring the West in a ruling the opposition politician blamed on President Vladimir Putin’s personal hatred and fear of him.

The Moscow court handed Navalny a three-and-a-half-year sentence, but his lawyer said the anti-corruption blogger would actually serve two years and eight months in jail because of time already spent under house arrest.

His lawyers said they would appeal.

The decision, which followed nationwide protests calling for Navalny’s release, will further strain relations with the West, which is considering imposing sanctions on Russia over its handling of the case.

Russia is already under numerous Western sanctions, however, and analysts say the West’s options for more pressure are limited. A Navalny ally had urged the West before the hearing to hit Putin’s inner circle with personal sanctions.

Russia has suggested that Navalny is a CIA asset, a charge he rejects, and has told the West to stay out of its domestic affairs.

Navalny, one of Putin’s most prominent critics, was arrested on January 17 for alleged parole violations after returning from Germany where he had been recovering from being poisoned with a military-grade nerve agent.

Navalny said Russian state security agents had put the poison in his underpants, something the Kremlin denied. He used Tuesday’s hearing to try to frame Putin’s place in history.

“(Putin’s) only method is killing people. However much he pretends to be a great geo-politician, he’ll go down in history as a poisoner. There was Alexander the Liberator, Yaroslav the Wise, and Putin the Underwear Poisoner,” said Navalny.

His supporters, on hearing the ruling, encouraged people to gather in central Moscow though riot police had already taken up position. The Moscow metro shut down three central stations.

Reuters reporters saw hundreds of protesters and the police detain some of them violently. Some of them chanted, “Putin is a thief!” and “Putin is a poisoner!”

Outside the court earlier on Tuesday, Reuters reporters saw riot police detain around 70 of Navalny’s supporters. The OVD-Info monitoring group later reported 1,408 arrests nationwide, over 1,000 of those in Moscow.

After his arrest, Navalny released a YouTube video making allegations about Putin’s wealth that was viewed over 100 million times. The Kremlin said it was false.

Tuesday’s hearing focused on Navalny’s alleged parole violations over a suspended sentence in a 2014 embezzlement case Navalny says was trumped up. 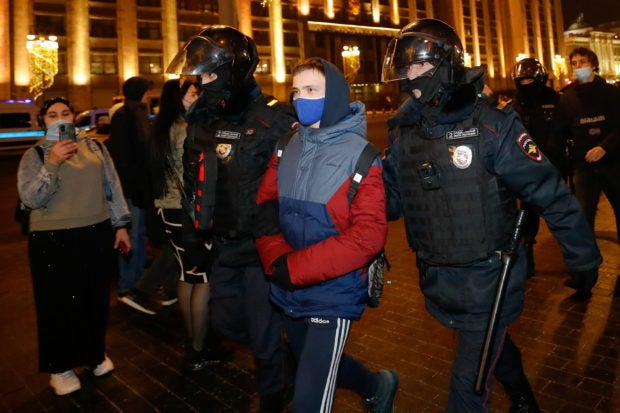 Riot police officers detain a person during a demonstration after Russian opposition leader Alexei Navalny was sentenced to three and a half years in jail, in Moscow, Russia February 2, 2021. REUTERS/Evgenia Novozhenina

Navalny, in a fiery speech to the court, alleged he was going to be jailed because of Putin’s concerns about him as a political rival, a suggestion the Kremlin has laughed off, referring to Navalny as a marginal figure without wide popular support.

Putin, 68, has dominated Russian politics since 2000 and could rule until 2036 under constitutional changes approved in a referendum last year.

“Someone did not want me to take a single step on my country’s territory as a free man. And we know who and we know why – the hatred and fear of one man, living in a bunker, whom I offended by surviving when he tried to have me killed,” Navalny, 44, told the court from inside a glass cage.

After the verdict was read out, Yulia, his wife, removed the mask she was wearing because of the coronavirus pandemic and waved to her husband before giving him a shrug. Navalny shouted: “Don’t worry. Everything will be ok.”

Putin, who the Kremlin said was not following the Navalny hearing because he was busy with affairs of state, said in December that reports the Russian state had poisoned Navalny were part of a U.S.-backed plot to try to discredit him.

Putin said Moscow would have finished the job if it had wanted Navalny dead.

Tuesday’s hearing was the result of a request from Moscow’s state prison authority which has accused Navalny of violating the terms of a suspended three-and-a-half-year prison sentence for embezzlement.

Navalny said the conviction, which was criticized by the European Court of Human Rights at the time, was politically motivated.

A prison service representative told the court that Navalny had violated public order many times since being handed the suspended sentence and had systematically failed to report in.

Navalny told the court he had been unable to report to the prison service at the end of last year because he was recovering in Germany from being poisoned. The prison service said its complaints pre-dated his poisoning and that Navalny had in any case been well enough to meet journalists after being discharged from a Berlin hospital in September.

Navalny, already serving a 30-day detention sentence in connection with the same case, told the court: “On what grounds are you saying you didn’t know where I was? You’re misleading the court.”

Supporters have staged two straight weekends of nationwide protests demanding he be freed, despite a massive show of police force, the threat of arrest, bitter cold, and the pandemic.

While the trigger for those protests was Navalny’s arrest, some protesters say they have also taken to the streets to vent their frustration over declining living standards.