MANILA, Philippines — A major factor that hinders reporting of abuse in Bangsamoro is the “culture of silence” in families that view violence against women and children as a shame or a stain on their clan’s honor, said Helen Rojas, chief of staff of the Bangsamoro Women Commission (BWC).The lack of awareness of women’s rights, especially in grassroots communities, she said, contributes to the silence, leading to nonreporting and nondocumentation.

In a training session with women from North Cotabato in 2017, a participant spoke of how her husband brought a mistress to their conjugal home to live with them. “[She] was OK with it because the ustad (religious leader) advised her not to separate from [her] husband,” Rojas recalled.

According to Suara Bangsamoro spokesperson Amirah Lidasan, it is also difficult to engage Moro women in discussions on gender violence, sexual violence and, more so, domestic violence because talking about what happens between married couples has become taboo.

Despite attempts at educational discussions among family members, cases of violence do not reach the courts because of “arrangements,” she said, adding: “Sometimes they resort to reading a passage from the Quran, from Prophet Mohammad, to explain to me why they won’t proceed anymore.”

In the conflict setup, most cases of violence against women reported to Suara Bangsamoro were committed by soldiers who raped someone in the Moro community, or had a relationship with a community member that is marked by “insistence” or force.

Incidents do not prosper into complaints, Lidasan said, “because settlements happen, even with the soldier.” And once the group pursues the cases, they become labeled as terrorism because most of the soldiers are deployed in their areas to scout for Moro rebels.

The Anti-Violence Against Women and Children (VAWC)Act, or Republic Act No. 9262, prohibits barangay officials from carrying out amicable settlements between the victim and the perpetrator.

Despite this, BWC chair Bainon Karon, in her State of Women Address on Nov. 25, 2020, cited eight child abuse cases that were settled amicably by the barangay officials or the Council of Elders.

She said the “usual practice” was giving the perpetrator a choice of paying a fine in the amount of P100,000, or to marry the victim.

Conflict Alert, a subnational system that tracks the incidents, costs, causes, actors and manifestations of violent conflict in Bangsamoro, has data on all conflict incidents from police blotters and media reports since 2011 that include incidents of violence against women.

In its report “Guns, Wars, and Extremism: Bangsamoro’s New Wars” published in 2017, Conflict Alert found that 2016 “saw an explosion of violence” in Autonomous Region in Muslim Mindanao during that year’s national and local elections. “The year also saw the emergence of a new form of vertical conflict—violent extremism,” it said.

While the top cause of violent conflict was shadow economy issues mainly due to trade in illegal drugs, gender violence came second, surpassing firearm violence, robbery, and identity conflict such as “rido” or clan feuding. 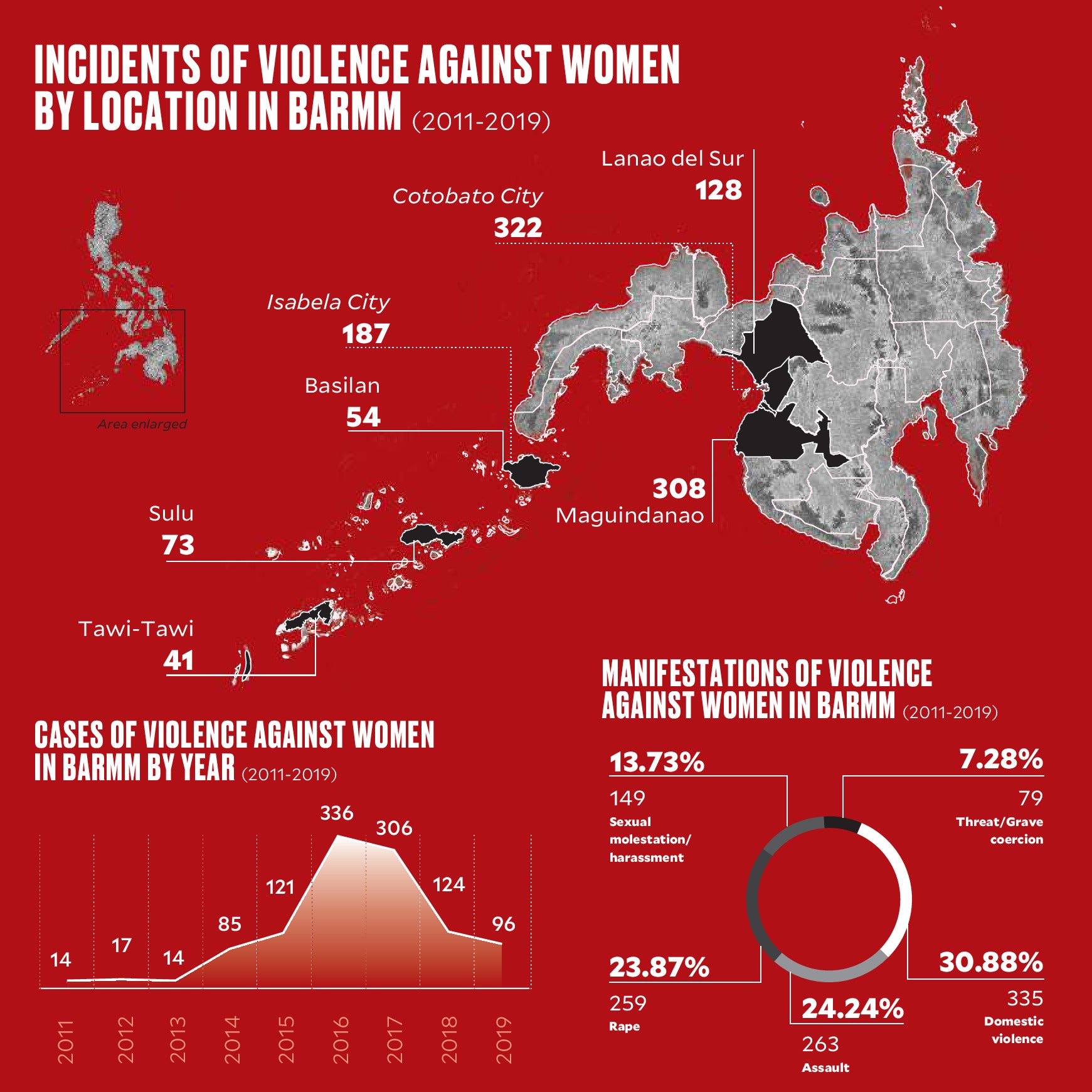 According to data from Conflict Alert, from 85 reports of violence against women in 2014, the number rose to 121 in 2015 and 336 in 2016, its highest recorded tally per year and “the first time that identity-related conflict, specifically gender violence, was anywhere near the top since the Bangsamoro Conflict Monitoring System was established in 2013.”

Domestic violence had the highest number of cases with 119, followed by assault, 112, and rape, 52.

Based on discussions on the data gathered by the monitoring group, Liezl Bugtay, conflict monitoring team leader, said her team saw the differences in reporting mechanisms in urban and rural areas. She cited schools in Isabela City that teach children and mothers what to do when they encounter abuses, making it easier and more accessible for victims to know how to report cases.

International Alert country director Nikki de la Rosa said that how the Moro people’s perspectives were shaped, the norms, as well as institutions like clans and their culture, equally affected their response to gender violence.

“It’s really what surrounds you that stops you from reporting and from sharing—factors that should be explored especially in the context of Bangsamoro,” she said.

But in order to determine the root of gender violence in conflict areas and provide deeper analysis of its effects, gaining access to complete data remains a crucial step for the team to consolidate its reports.

In its 2019 report, Conflict Alert said the confidentiality provision of RA 9262 was “used to restrict the access of researchers to data on gender violence” even after providing written guarantees that the information collected would be used only for quantitative analysis.

“The VAWC Law held the promise of changing and removing the conditions of violence that many women face. This can only be guaranteed by allowing access to the information needed to make change work,” the report said.

The team was fortunate to establish working relations with the police, Bugtay said. The head of investigation and detective management was open to data analysis, thus allowing the team access to the data they needed.

“They also saw they are lacking in data and in terms of how they use it, it’s more on the reporting of tabulations. They became interested to know the purpose of conflict monitoring,” she said.

But Moro women are not always necessarily victims of abuse, as indicated, De la Rosa said, in the “welfare networks” through which they organize themselves to achieve “restorative justice.”

These welfare networks are support groups that help Moro women affected by protracted displacement and violence in the region restore their relationship with the community through reintegration and provision of economic opportunities.

“While most times [Moro women] can be victims of gender violence, [they] still take it upon themselves to use their agencies to solve their problems and ensure each other’s welfare,” De la Rosa said. INQ

TAGS: Bangsamoro, culture of silence, Violence Against Women and Children