Countries tighten borders against virus as US orders mask-wearing 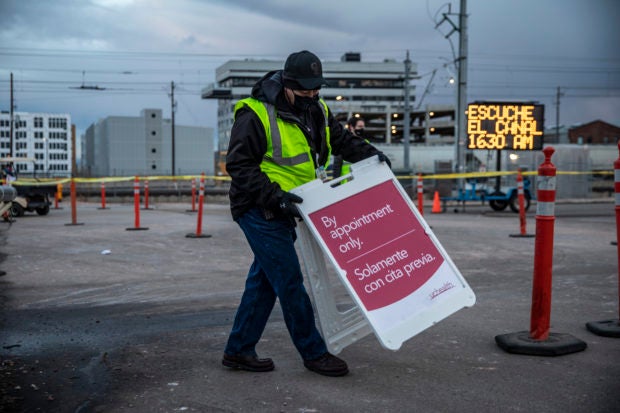 Workers prepare for a Covid-19 vaccination drive through at Coors Field baseball stadium on January 30, 2021, in Denver, Colorado. – UCHealth, the organizer and Colorado’s largest healthcare provider, has set the goal of vaccinating 10,000 people over the weekend. (Photo by Chet Strange / AFP)

PARIS, France – A number of countries tightened their borders against a surge in variant strains of the deadly coronavirus as the United States on Saturday ordered travellers to wear masks on most public transport.

With doses of the different Covid-19 jabs so far approved for use still in relatively short supply — and mass inoculation programmes in their early stages — Britain and the EU have become embroiled in an ugly row over the shots they had been promised by drugmaker AstraZeneca.

The jab developed by the British-Swedish firm is only the third to be rolled out in Europe. But the company has said it can only deliver a fraction of the doses promised to the Brussels and London because of production problems.

As the World Health Organization warned against “vaccine nationalism,” both Britain and EU said Saturday they were confident the problems could be resolved.

Nevertheless, tensions on either side of the English Channel showed scant sign of easing.

France’s European affairs minister Clement Beaune warned that it would pose “a problem” if the UK were given preferential treatment.

“If there is an industrial problem, that can happen, people can understand that,” he said in comments scheduled to be broadcast on Sunday.

“But preferential treatment is shown to Britain, that would be a problem.”

‘The world is watching’

British Foreign Minister Dominic Raab warned that “the world is watching and it is only through international collaboration that we will beat this pandemic”.

Nevertheless, Raab said he had been “reassured” in talks with EU Commission Vice President Valdis Dombrovkis that Brussels “has no desire to block suppliers fulfilling contracts for vaccine distribution to the UK”.

The AstraZeneca jab has also come under scrutiny as to its effectiveness for elderly people who are more vulnerable to severe cases of Covid-19.

Germany’s vaccine commission has recommended against using it on older people.

And on Saturday, Health Minister Jens Spahn said the government would no longer give priority to people over 65 when giving out the AstraZeneca shots.

“We’re now going to have to review the order of vaccination,” Spahn said.

Italy has similarly approved the AstraZeneca jab for all adults. But its medicines agency recommended alternatives be given to people aged over 55.

The AIFA agency “authorises the AstraZeneca vaccine for the prevention of Covid-19 disease in individuals over the age of 18, as per European Medicines Agency guidance,” it said.

But it noted “a level of uncertainty” about claims of the jab’s effectiveness in people over the age of 55, because the age group was “poorly represented” in trials.

As the global death toll surged past 2.2 million on Saturday, countries are tightening travel restrictions to try to rein in the spread of new more contagious strains of the novel coronavirus.

From Saturday, Germany banned most travellers from countries hit by new variants and France is to close its borders to non-European Union countries for all except essential travel from Sunday.

In Canada, travellers will have to quarantine in hotels at their own expense and airlines are suspending flights to southern destinations.

And in the US, the Centers for Disease Control and Prevention issued a sweeping order requiring the wearing of masks to protect against the spread of Covid-19 on virtually every form of public transportation throughout the country.

The order — which extends to travel on airplanes, trains, buses, taxis, ride-shares, subways, ferries and ships — expands on one of the first executive orders signed by President Joe Biden, which required masking for interstate travel as part of a larger strategy to reduce the spread of Covid-19.

A small number of countries however have tentatively started to ease some of their stricter coronavirus restrictions.

In Italy, the Vatican Museums, including the Sistine Chapel, said they would reopen on Monday after being closed for 88 days — the longest closure since World War II.

The world-famous collections will open their doors to the public from Monday to Saturday, but visitors must pre-book tickets and for specifically timed entry slots.

“The Pope’s Museums await you with pleasure!” a statement said.

In Norway, the government said that a number of restrictions in Oslo and the surrounding region would be lifted next week.

Shops would be able to reopen in the capital and 24 nearby municipalities, from Wednesday, as would restaurants, but a ban on the sale of alcohol would remain in place, the government said.