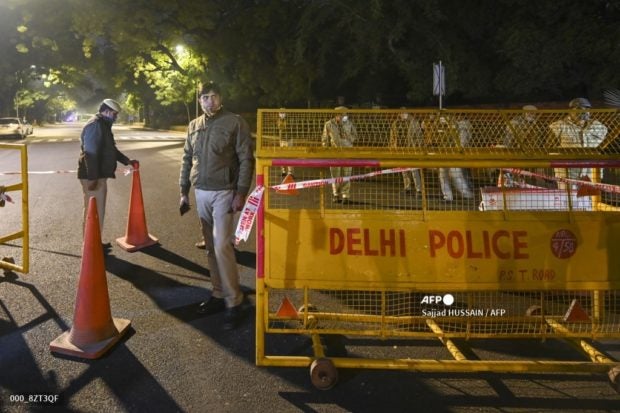 Police close off a street after an explosion near the Israeli embassy in New Delhi on January 29, 2021. (Photo by Sajjad HUSSAIN / AFP)

NEW Delhi, India — A blast outside the Israeli embassy in New Delhi on Friday damaged cars but did not cause injuries, police said.

The district around the embassy was sealed off after the explosion and police and bomb disposal experts took over the scene.

A police statement described it as a “very low intensity improvised device” that blew out the windows on three nearby cars.

“Initial impressions suggest a mischievous attempt to create a sensation,” the statement added.

In February 2012 a bomb attack on an Israeli diplomatic car in Delhi injured four people.

The latest incident took place close to where Prime Minister Narendra Modi and other government and military leaders were attending an army parade.

The Indian capital is also on a security alert because of farmers’ protests against government agriculture reforms that deteriorated into serious unrest this week.