MANILA, Philippines — With the economy shrinking in the fourth quarter to its worst post-war recession in 2020, there appears to be no room for failure in so far as the rollout of the government’s vaccination program, Vice President Leni Robredo said on Thursday.

“Alarming news today. GDP (gross domestic product) contracted by 8.3% in the 4th Quarter of 2020, which is worse than the forecasted -7.9%. This brings to -9.5% the 2020 full-year contraction, reportedly the worst since 1946,” Robredo, an Economics graduate from UP, said in her personal Facebook profile.

According to Robredo, the contraction — a negative-8.3 percent record on the country’s GDP for the fourth quarter — exceeded forecasts and left the Philippines with its biggest economic contraction since 1945.

Which is why the vaccines, which would help in achieving herd immunity which is needed to kickstart businesses again, would play a vital role despite it not being the sole solution.

“We’re hoping to perform better in 2021. It is crucial that we do not bungle our vaccination roll out. The number of new cases is still in the thousands each day and an effective vaccination plan will be a game changer. It is not the be-all and end-all but it will definitely increase overall confidence,” said Robredo. 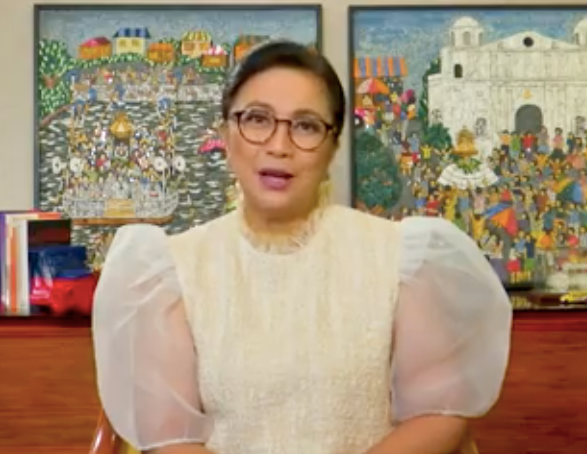 Screengrab from The Office of the Vice President website.

Earlier, the Philippine Statistic Authority said that the 9.5 percent decrease in GDP was not only the lowest since 1946, but the worst ever recorded since the country started noting GDP numbers in the same year, after the Second World War.

The figures were actually worse than the negative seven percent recorded during the tail end of former president Ferdinand Marcos’ dictatorship, and the 0.5 percent reduction during the 1998 Asian financial crisis — the last time the country’s economy contracted before 2020.

In the second quarter of 2020 alone, the country entered into a recession after the GDP contracted by 16.5 percent due to lockdown restrictions placed by the government to avoid further coronavirus transmissions.  However, it left several industries and workers who rely on daily earnings in shambles.

Robredo said that much work is needed to be done before the country recovers, as financial experts expect the country to lag behind due to vulnerability to the pandemic.

Previously, the Vice President stressed that shifts in policy along with transparency in the vaccine procurement would push economic recovery.  As of now, the country has yet to rollout its vaccines but officials said that these may be available by the end of February.

“Comparative figures with our Asian neighbors indicate it will take us a much longer time to recover. Household consumption and demand is still down. In a consumption economy like ours, this is bad news,” she noted.

But even in the face of low numbers, the administration’s economic managers remained optimistic that the country would bounce back in 2021.  In a joint statement posted on the National Economic and Development Authority’s website, the economic cluster said that it was still able to avert long-term negative effects.

“The Development Budget Coordination Committee (DBCC) estimates that the economy will grow by 6.5 to 7.5 percent in 2021 and by 8 to 10 percent in 2022. The Duterte administration’s efforts to increasingly open the economy while taking resolute steps to fast-track the vaccination program and keep the COVID-19 caseload to the lowest level possible, would boost business and consumer confidence that are crucial to a robust economic recovery,” the economic managers said.

“All of these efforts to contain the coronavirus and revive the economy will allow us to prevent long-term economic scarring and productivity losses and recover to the pre-pandemic level by mid-2022.  Our early progress in reducing poverty and attaining most of the ten-point socioeconomic agenda by mid-term or in 2019 has prepared the country better and put it on a more solid path to recovery,” they added.