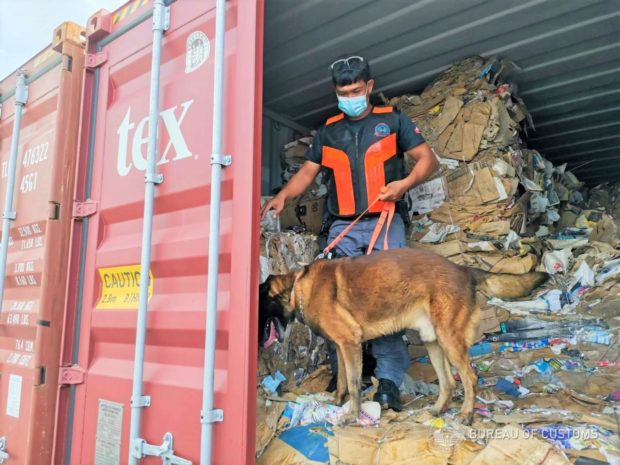 MANILA, Philippines — The pro-environment EcoWaste Coalition on Thursday renewed its call for the government to ratify the Basel Convention Ban Amendment next after the Senate adopted on second reading a resolution concurring the ratification of the Treaty on the Prohibition of Nuclear Weapons (TPNW).

“Ratifying the Basel Convention Ban Amendment and imposing a national ban on waste importation will be our best legal protection against the nasty dumping into our shores of rubbish, including electronic, plastic and household wastes, from overseas,” Aileen Lucero, national coordinator of the EcoWaste Coalition, said in a statement.

“Like the treaty banning nuclear weapons, the Basel Convention Ban Amendment is now an international law and we see no compelling reason for delaying further our country’s ratification of this agreement, which is in defense of the national interest and in sync with the president’s strong position against foreign waste dumping,” she added.

The said amendment, adopted by parties to the Basel Convention in 1995, entered into force on December 5, 2019.

The Basel Ban Amendment prohibits the export of hazardous wastes for any reason, including recycling, from rich countries.

EcoWaste issued its call to the government for the ratification of the Basel Ban Amendment as it expressed delight over the Senate’s action on the TPNW.

On Wednesday, the Senate adopted on second reading a resolution expressing the chamber’s concurrence in the ratification of the TPNW.

The Senate is expected to approve the resolution on the final reading next Monday.

President Rodrigo Duterte ratified the TPNW on November 18, 2020, and then submitted it to the Senate for concurrence.

The 1987 Constitution requires concurrence by at least two-thirds of the 24-member Senate before any international agreement that the Philippines signs become binding.

“We support our nation’s stance illegalizing nuclear weapons and urge all countries, especially the world’s nuclear powers, to do the same as well,” Lucero said.

The treaty prohibits state parties from “developing, testing, producing, manufacturing, transferring, possessing, stockpiling, using or threatening to use nuclear weapons; assisting, encouraging or inducing anyone to engage in said activities; and allowing nuclear weapons to be stationed, installed or deployed in their respective territories.”

“Even as we did not make it to the first 50 countries that ratified the treaty, the anticipated Senate concurrence in its ratification will reinforce the state policy for a country and, by extension, a world, free of nuclear weapons,” Lucero said. Zac Sarao, Trainee