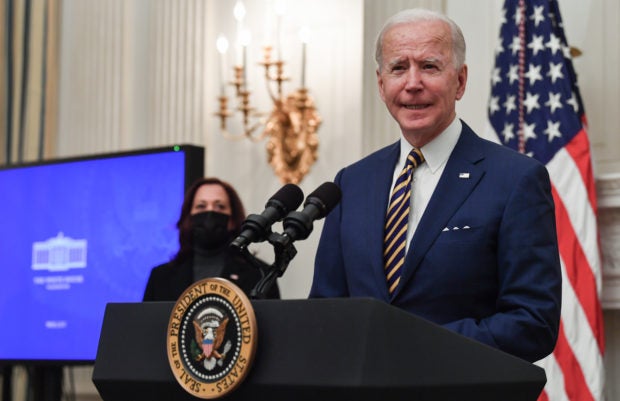 US President Joe Biden speaks about the Covid-19 response before signing executive orders for economic relief to Covid-hit families and businesses in the State Dining Room of the White House in Washington, DC, on January 22, 2021. (Photo by Nicholas Kamm / AFP)

WASHINGTON – One week into the job, US President Joe Biden has sent a clear warning to Beijing against any expansionist intentions in East and Southeast Asia.

In multiple calls and statements, he and his top security officials have underscored support for allies Japan, South Korea and Taiwan, signalling Washington’s rejection of China’s disputed territorial claims in those areas.

On Wednesday, Biden told Japanese Prime Minister Yoshihide Suga that his administration is committed to defending Japan, including the Senkaku Islands, which are claimed both by Japan and China, which calls them the Diaoyu Islands.

That stance was echoed by Defense Secretary Lloyd Austin, who told Japanese counterpart Nobuo Kishi on Saturday that the contested islands were covered by the US-Japan Security Treaty.

Austin affirmed that the United States “remains opposed to any unilateral attempts to change the status quo in the East China Sea,” according to a Pentagon statement on the call. 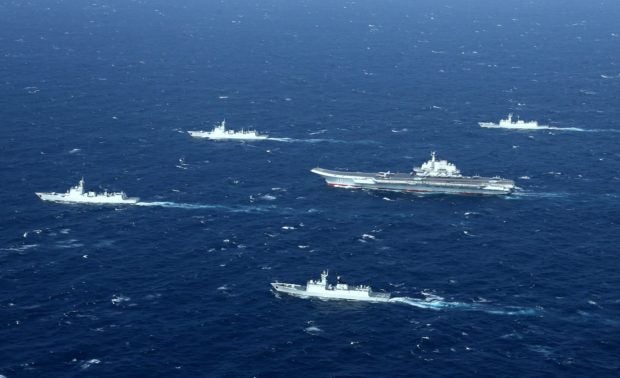 “We will stand with friends and allies to advance our shared prosperity security and values in the Indo-Pacific region — and that includes deepening our ties with Democratic Taiwan,” Price said in a statement.

“Our commitment to Taiwan is rock-solid.”

Those comments and others sought to emphasize that the new Biden administration will not deviate from the firm security stance towards China that it inherited from ex-president Donald Trump.

‘A free and open Indo-Pacific’

Washington has long sided with allies such as South Korea, Japan, Vietnam, the Philippines and Malaysia in rejecting disputed Chinese territorial claims in the East China Sea and South China Sea.

But the Trump administration raised the tone of that rejection when then-secretary of state Mike Pompeo declared last July that most of Beijing’s maritime claims in the South China Sea were “completely unlawful.”

In his first overseas contacts after taking office, Austin included not only Japan but also counterparts in Australia, South Korea and India.

Over the past three years, Washington has expanded defense cooperation with India, which sees China posing a military threat both on its northern border and in the seas to the south.

In a call with Indian defense minister Rajnath Singh on Wednesday, Austin observed that the two countries’ defense partnership “is built upon shared values and a common interest in ensuring the Indo-Pacific region remains free and open,” said Pentagon spokesman John Kirby.

Austin “emphasized the importance of maintaining a free and open Indo-Pacific, founded on existing international law and norms in a region free of malign behavior,” Kirby said.

To underscore the unchanged US stance in Asia, on January 24, the fourth day of the new Biden administration, the US aircraft carrier USS Theodore Roosevelt embarked on a so-called “freedom of navigation” mission in the South China Sea, sailing in or close to waters that China claims to underscore Washington’s rejection of those claims.

In addition, even as his initial focus for the US Defense Department is battling the coronavirus, Austin is expected to make Asia his first destination on an international trip.