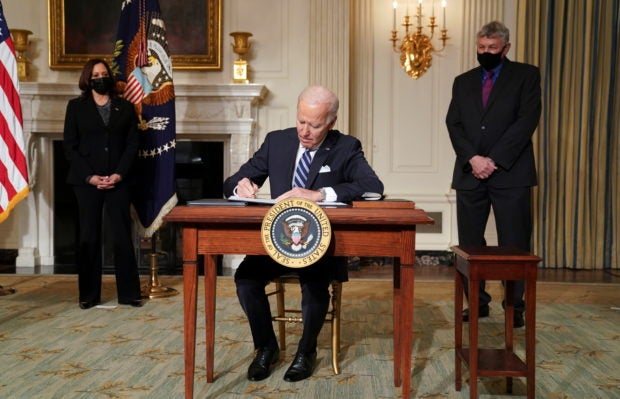 WASHINGTON  – President Joe Biden on Wednesday signed a new raft of executive actions to combat climate change, including pausing new oil and gas leases on federal land and cutting fossil fuel subsidies, as he pursues green policies he billed as a boon for job creation.

The orders map out the direction for the Democratic president’s climate change and environmental agenda and reverse the policies of his Republican predecessor, Donald Trump, who sought to maximize U.S. oil, gas and coal output by removing regulations and easing environmental reviews.

“In my view, we’ve already waited too long to deal with this climate crisis,” Biden told a White House ceremony, noting the threats the nation faces from intensifying storms, wildfires, floods and droughts linked to climate change as well as air pollution from burning fossil fuels. “It’s time to act.”

Biden unveiled a “whole-of-government approach” to put climate change concerns at the center of U.S. national security and foreign policy as well as domestic planning. He said building a modern and resilient climate-related infrastructure and a clean energy future for America would create millions of good-paying union jobs.

“This is a case where conscience and convenience cross paths, where dealing with this existential threat to the planet and increasing our economic growth and prosperity are one and the same. When I think of climate change and the answers to it, I think of jobs,” added Biden, who faces pressure from liberals in his own party for aggressive action on climate change.

Biden’s focus on climate change has cheered international partners and environmental advocates, but upset Big Oil, which argued that his moves would cost the United States millions of jobs and billions of dollars in revenue with the U.S. economy still battered by the COVID-19 pandemic.

U.S. special climate envoy John Kerry said the United States plans to announce a target for reducing its greenhouse gas emissions by 2030 under the Paris climate accord before an international climate summit that Biden will hold on Earth Day April 22.

China leads the world and the United States is second in greenhouse gas emissions, which scientists link to climate change. Kerry indicated the United States would work with China but would not trade other pressing concerns to make climate progress.

Biden directed the Interior Department to pause new federal oil and gas leases on public lands and offshore waters “to the extent possible” and undertake a “rigorous review” of existing leasing and permitting practices.

The pause will not restrict energy activities on lands that the government holds in trust for Native American tribes.

Biden also set a goal to conserve 30% of federal land and waters to protect wildlife by 2030 and seek to double renewable energy production from offshore wind, also by 2030.

The orders affect large swaths of land onshore in mostly Western states, as well as offshore drilling acreage located mainly in the U.S. Gulf of Mexico, which combined, make up about a quarter of the U.S. oil and gas supply. The action drew criticism from some states that depend on drilling revenue.

Biden also directed federal agencies to “eliminate fossil fuel subsidies as consistent with applicable law.” It was not clear which subsidies could be stripped away under the order, given many of the industry’s tax breaks are congressionally approved. Biden also said he would ask Congress to end the $40 billion in fossil fuel subsidies through legislation.

The president said his goal was to achieve an electric energy sector fully without carbon pollution by 2035. He cited “environmental justice” in his plan to spur investment in low-income and minority communities disproportionately affected by pollution. He also vowed to help revitalize the economies of coal, oil and gas and power-plant communities.

Republican Senator John Barrasso of Wyoming, a state reliant on coal, oil and gas, said: “Despite all the hot air from climate alarmists, banning new oil, gas and coal leases on federal land and waters will do nothing to address climate change. Energy producers will simply go elsewhere – likely out of state or overseas.”

Biden’s orders also included creation of climate change positions and an inter-agency task force within his administration, measures to boost federal procurement of U.S.-sourced clean energy and vehicles and protection for scientists from political interference.