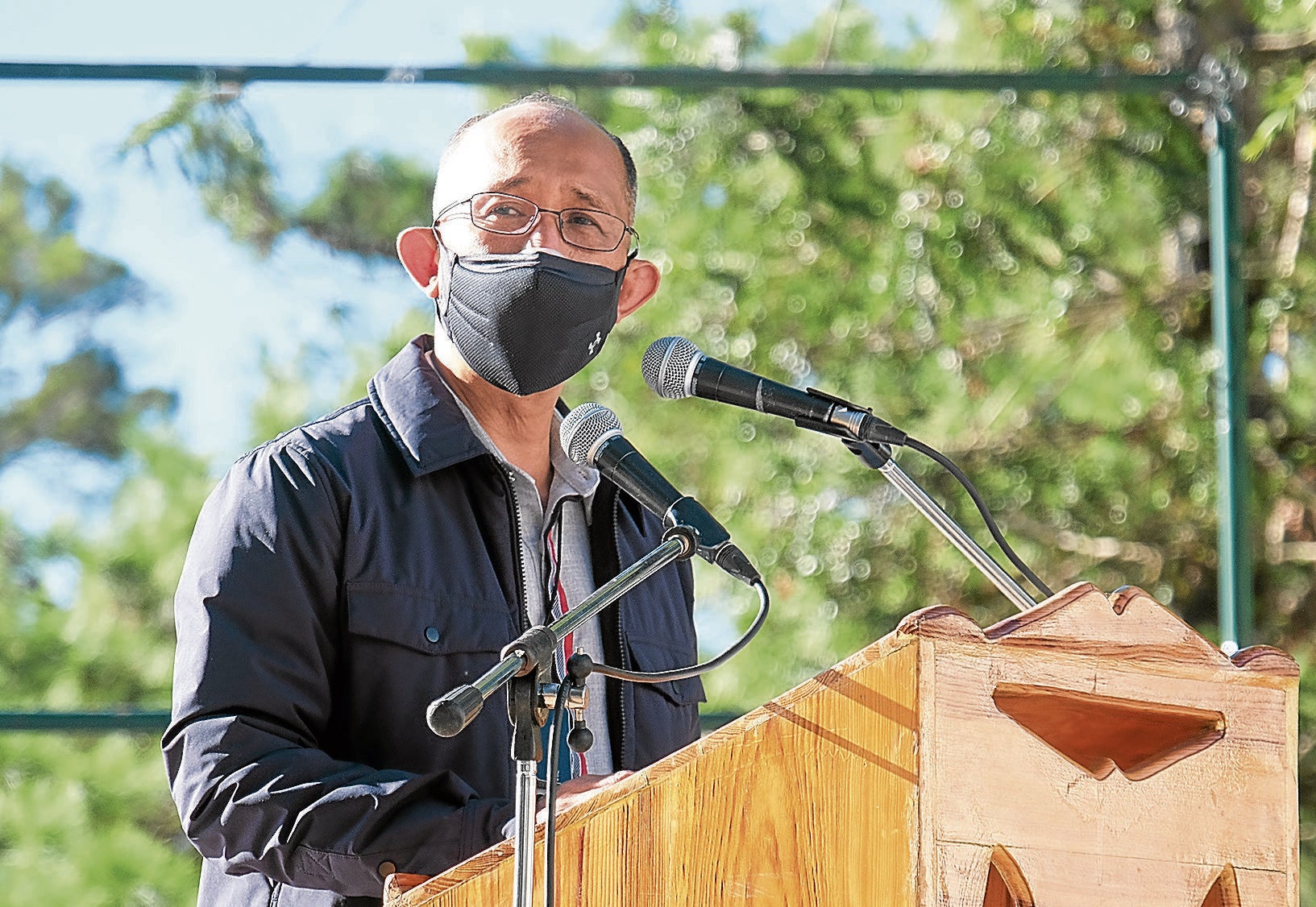 HE’LL IMPOSE FINES—EVEN ON HIS WIFE Baguio City Mayor Benjamin Magalong, shown here addressing City Hall workers during a recent flag-raising ceremony, has some explaining to do after a party held at one of the city’s major hotels on Jan. 17, and which included himand his wife among the guests, drew criticism for violations of health safety and regulations. —NEIL CLARK ONGCHANGCO/CONTRIBUTOR

Magalong, the government’s lead contact tracer, said he was invited to Yap’s 44th birthday party on Jan. 17 at The Manor inside Camp John Hay and admitted “outright violations” of health measures to prevent transmission of the new coronavirus.

The mayor said that when he arrived around 8 p.m., he was satisfied that mandatory health protocols, like wearing of masks and physical distancing, were being observed. Some guests removed their masks when food was served in the open park while a traditional community dance was being performed.

Magalong said he and his wife, Arlene, were having dinner when he and other guests were asked to join in the dancing.

“Of course, we’re only human. You were eating and suddenly you were invited to dance, then you forgot [to put on a mask],” he told reporters.

But the mayor said he made sure to remind guests to keep wearing their masks and observe physical distancing.

“We’re not perfect. That was what happened there. But as I’ve said, there’s still a violation,” he said.

The Inquirer tried to reach Yap for comment, but he did not return calls.

In an interview with ABS-CBN on Tuesday night, he said he organized the dinner to promote tourism in Baguio.

He said he and his guests had tested negative for the coronavirus before traveling to Baguio.

He said they wore masks but had to remove these during dinner and while mingling with dancers.

In another interview with CNN Philippines, Yap apologized for not wearing a mask, saying there was no excuse for it. “It was never my intention to offend anyone. I would never do anything to endanger anyone,” he said.

It was not immediately known how many guests were at the party, but Magalong said it was a “small group.”

He said authorities were still identifying other people who attended the event and they would be asked to explain what happened that night.

“We will let them explain why they violated the minimum health standards, especially wearing face masks, so we can make the necessary cases against them and then fine them,” Magalong said.

According to the mayor, even his wife had violated the health rules after she was photographed without a mask.

“Obviously, since some people had their pictures taken with my wife, she didn’t wear her face mask. So I have to fine even her,” Magalong said.

He said he did not personally know Yap but was invited by a common friend to meet the social media celebrity who helped promote Baguio as a tourist destination.

“He (Yap) has been inviting people to come to Baguio and has been assuring them the city is safe,” Magalong said.

He said Yap was with a group that bought nine paintings at the Interlinked exhibit here. Interlinked was one of the highlights of last year’s low-key Baguio Creative City Festival.

Yap was also spotted at the “Christmas in Baguio” launch.

Magalong said the management of The Manor was also asked to explain the breach of health rules.

Sources said the mayor had written the hotel, citing the absence of a formal government notification about the event.

The letter also called the hotel’s attention to the amount of liquor that was served at the dinner, which reportedly exceeded a ceiling prescribed for all dining establishments in Baguio while the quarantine remains in effect.

All events must be reviewed by the city government to make sure health safety measures were followed according to local regulations.

The Manor has yet to issue a statement. Jovita Ganongan, Cordillera director of the Department of Tourism, said it would be given a chance to explain how Yap’s guests were allowed to party and congregate without masks.

Yap’s birthday party and the violations were heavily criticized on social media since Baguio continued to experience surges in coronavirus infections and a more contagious variant of the virus had been detected in the Cordillera.

“This is hypocrisy. We hope ordinary people would also be given the chance to explain when they are caught violating the protocols,” one netizen said.

Another told Magalong: “People here are trying hard to follow the health protocols even if we can hardly breathe under a face shield and a face mask. And yet you tolerate those at the party.”

Health Secretary Francisco Duque III defended Magalong, saying he was confident that the mayor would have given “sound and proper advice” with regard to social gatherings.

“I know him well enough [as someone] who would have advised against [violating the health protocols]. He himself must have been caught off guard,” Duque said in an interview on Wednesday.

Some residents remained skeptical about reopening the city to tourists in October last year.

More than 20,000 visitors had toured Baguio by the end of December, and 3,000 more have been cleared to visit in January and February.

All tourism establishments have been “diligent” about setting up health systems and heeding all rules, Ganongan said.

She said critics should understand that The Manor, as well as other Baguio hotels, “suffered when the Luzon lockdown forced them to close,” and would take great pains to make sure no one got sick on their watch.

The impact on the industry not only affected investors but also their employees, vegetable suppliers, and the local economy, she said.

“Almost every major building in Baguio was put up to serve tourists,” Ganongan said. —WITH REPORTS FROM MARICAR CINCO AND ALLAN MACATUNO