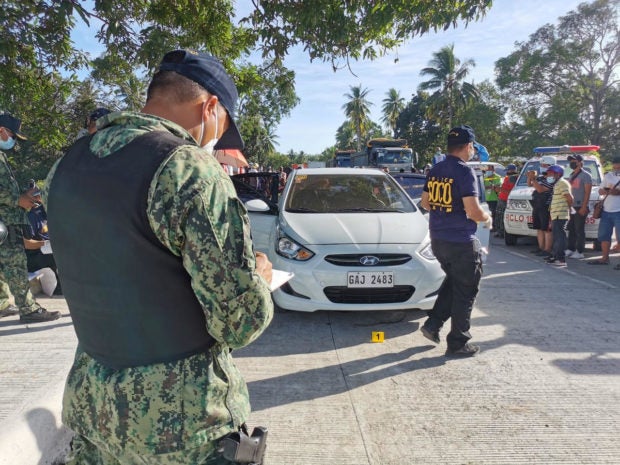 Personnel from the Bacong police and the Negros Oriental provincial crime laboratory investigate the car where Ferdinand Escalante, 35, was found dead on Tuesday, Jan. 26. His brother Lyndon told police that he had been working as a political coordinator for Gov. Roel Degamo at the time of her death. (RAFFY CABRISTANTE/INQUIRER VISAYA

DUMAGUETE CITY –– The family of a Negros Oriental political coordinator, who was killed inside a car on Tuesday, Jan. 26, appealed to authorities to identify and arrest those behind the crime.

Ferdinand Escalante, 35, a make-up artist and a political coordinator for Negros Oriental Gov. Roel Degamo, was found dead inside a locked white Hyundai Accent sedan with his head wrapped in plastic and a gunshot wound in the body.

Escalante was on the passenger seat of the car parked along the diversion road in the village of Isugan in Bacong town.

His brother Lyndon called on authorities to investigate the incident speedily and have more police visibility around the town. His brother was found in an area with no street lights.

The investigation shows that the car was parked as early as 10 p.m. on Monday, Jan. 25, but because of its tinted windows, passersby didn’t notice anything suspicious.

Escalante’s body was discovered only around noon on Tuesday by a group of friends who were having lunch near the spot where the car was parked.

Degamo, as of this writing, has yet to release an official statement on the matter.