Galvez: PH still sure of 40M doses from COVAX pool 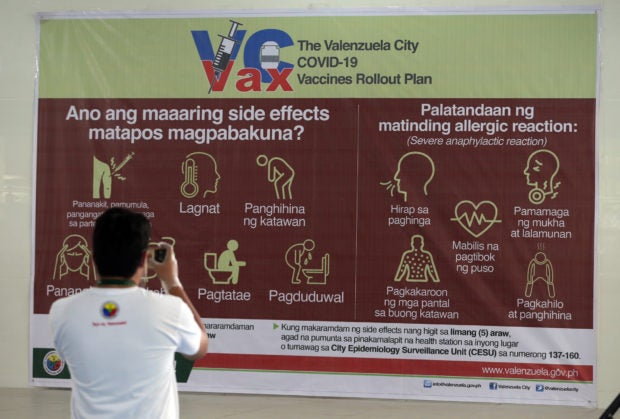 PREPARING FOR THE JAB The city government of Valenzuela launches its Covid-19 vaccination program on Tuesday by informing residents of the side effects of the vaccine. The information shown in the picture above is posted at Malinta Elementary School. The local government has designated 17 vaccination sites across the city. —NIÑO JESUS ORBETA

MANILA, Philippines — The government on Tuesday said the Philippines would still get its full allocation of 40 million doses of Covid-19 vaccines to cover 20 percent of its population despite recent changes in the cost-sharing plan with a global procurement pool and reports of a shortfall in vaccine production.

Carlito Galvez Jr., who handles vaccine procurement, and the Department of Health (DOH) said the vaccines would arrive, with “no delays,” in time for the initial rollout in February and March.

In a “clarification” issued on Monday, the DOH said the World Health Organization co-led COVAX procurement pool, set up to ensure access to vaccines for poor countries, would shoulder 15 percent of the supply, while the remaining 5 percent would have to be paid for by the government of the recipient country.

“Previously, this entire 20 percent was to be provided to us for free,” the DOH said.

The DOH did not say what led to the “changes in financing,” which came less than a month before the immunization of health workers and vulnerable sectors, but it gave assurance that the budget for the 5 percent (10 million doses) had already been secured.

On Tuesday, Galvez said that although the 5 percent would no longer be free, the vaccines were offered through COVAX at a “very low” cost—no more than $7.

“This COVAX, as we see it, because of the need of different countries, they prioritized their own needs and then donated some [to other participating countries]. Still, it’s a very big help [to us],” he said.

The National Task Force Against COVID-19 headed by Galvez opened on Tuesday a series of talks with local governments, from tracing and testing infected people a year ago to vaccination plans this time.

In Pasig City, the local government has designated 16 vaccination sites that include hospitals, schools, and government buildings; formed teams of vaccinators; and laid out guidelines for the actual inoculation, monitoring of adverse effects, and even hospital waste management.

The national government aims to vaccinate 70 million people, as it expects 148 million doses secured through deals with drug companies and 40 million doses through COVAX.

Most likely to arrive next month were vaccines from COVAX, including brands made by Pfizer of the United States, AstraZeneca of Britain, and Sinovac Biotech of China, Galvez said.

Last week, AstraZeneca reported a shortfall in its vaccine production. The government hopes this will not affect early delivery of vaccines to the Philippines since Southeast Asian countries mostly rely on AstraZeneca’s plant in Thailand rather than on its plant in Europe, Galvez said.

The Philippines also maintains “diplomatic relations” with Serum Institute of India, which also makes the AstraZeneca vaccine and another vaccine brand, Novovax. he said.

As a “strategy,” he said, the Philippines keeps “multiaccess” to various pharmaceutical companies to stave off supply problems caused by shortages of materials or production shortfalls.

Galvez said the government was also looking at the “single-shot” Janssen vaccine of Johnson & Johnson, as this would require “simpler” logistics and storage unlike the other brands.

He said the DOH could shoulder the “consumables,” such as syringes, during the initial vaccine rollout, although the government was working on having these included in the vaccine cost under the supply agreements with the drug companies.

In a meeting with President Duterte on Monday night, Defense Secretary Delfin Lorenzana said military troops would be trained in administering the vaccines, especially to people in the provinces.

He said Navy ships with freezers with temperatures of minus 15 degrees to minus 18 degrees Celsius could be used to transport vaccines to islands.

The Coast Guard, too, can help with its nine ships with freezers that have temperatures of minus 20 to minus 25 degrees Celsius, he said.

To ease fears of side effects, Sen. Nancy Binay has introduced legislation for indemnification of people who would suffer from adverse effects of the vaccines.

Senate Bill No. 2015 would create a fund subsidized by pharmaceutical companies for indemnification of people who might experience “unanticipated adverse events” after receiving Covid-19 vaccines.

“This shall be the primary mode of compensation and an alternative to long-drawn, expensive court litigation that constrain[s] vaccine recipients from pursuing bona fide claims for vaccine-related injuries,” Binay said in her bill’s explanatory note.

She noted that compensation for vaccine injuries is increasingly regarded as an important component of successful vaccination programs in the face of “vaccine hesitancy”—reluctance or refusal to be vaccinated despite the availability of vaccines—of some people.

The Dengvaxia controversy “has contributed to the decline in vaccine confidence” in the country, she said. — WITH REPORTS FROM LEILA B. SALAVERRIA AND DJ YAP INQ