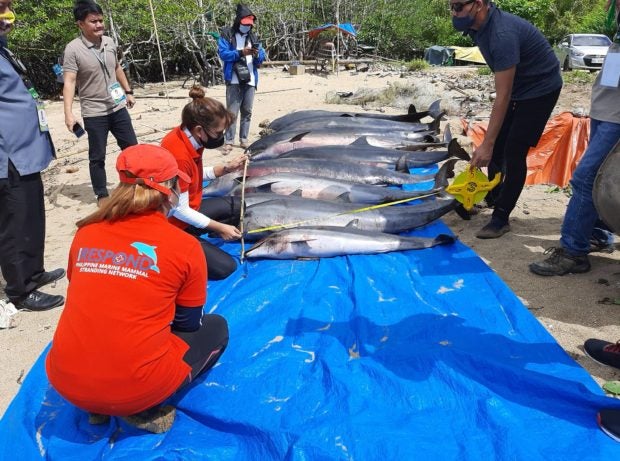 BEACHED A team from the Bureau of Fisheries and Aquatic Resources collects tissue samples from the Fraser’s dolphins that beached and died in Del Gallego, Camarines Sur, this week. The marine mammals’ stranding and deaths have been linked to blast fishing in Ragay Gulf. —PHOTO COURTESY OF NONIE ENOLVA/BFAR

LEGAZPI CITY—Thirteen of 25 dolphins stranded on the shores of Del Gallego town in Camarines Sur province on Tuesday died from what fisheries officials described as injuries suffered from blast fishing.

A necropsy performed on the Fraser’s dolphins showed “hemorrhages in almost entire body and blood oozing from the mouth, eyes and ears,” Nonie Enolva, spokesperson for the Bureau of Fisheries and Aquatic Resources in Bicol region, said in a statement.

The marine mammals were found by fishers on the shores of Barangay Magais 1 at 4 a.m. The 12 surviving dolphins were released back to Ragay Gulf after these were examined by local responders.

“Shock waves due to blast fishing at Ragay Gulf could have caused the sea mammals’ lungs to collapse, which resulted in their drowning,” Enolva said. The water body is a hot spot for this illegal fishing method, she noted.

Enolva said shock waves from blasting could disrupt the dolphins’ balance and coordination.

Dolphins, like other sea mammals, usually stay in deep waters for 15 to 20 minutes and break the surface to breathe. When they are disturbed, they look for areas where they can be relieved from “acoustic trauma,” usually shallow waters where they end up being stranded, she said.

Enolva said the dolphins could be part of a pod seen by villagers in the waters off Del Gallego and nearby Tagkawayan town in Quezon province.

Stranding of marine mammals have been reported recently elsewhere in Bicol. In October last year, nine melon-headed whales, said to be victims of blast fishing, were washed ashore at a coastal village in San Andres town, Catanduanes province.

Records from the Philippine Marine Mammal Stranding Network showed that Bicol had posted a high incidence of mass stranding of marine mammals due to illegal fishing practices, like blast fishing, for the past three years. INQ