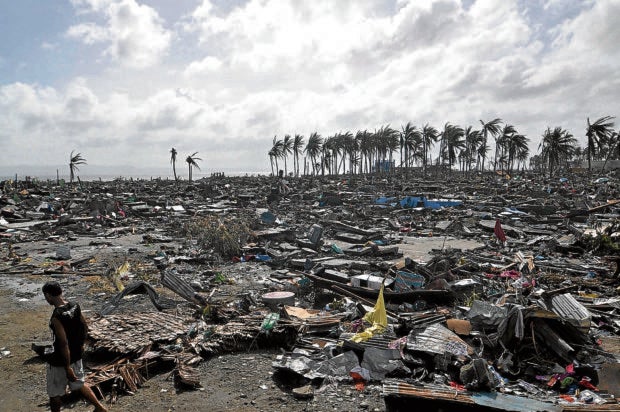 ‘YOLANDA’ AFTERMATH Tacloban City became the face of the devastation wrought by Supertyphoon “Yolanda” in the Philippines in 2013. —RICHARD A. REYES

MANILA, Philippines — The Philippines is among the countries most affected by extreme weather from 2000 to 2019, according to a study by a German environmental policy think tank.

Germanwatch on Monday released its Global Climate Risk Index report, showing that the Philippines ranked fourth out of 180 countries in the 20-year period, following Puerto Rico, Myanmar and Haiti.

Eight of the top 10 most affected countries are developing nations.

The index showed that Mozambique and Zimbabwe were the two countries hardest-hit by extreme weather. Both were struck by “Idai,” the deadliest and costliest cyclone recorded in the southwest Indian Ocean.

Third worst-hit was the Caribbean island nation of the Bahamas due to devastation from Hurricane “Dorian.”

The United States was not included in the 2019 index due to data problems.

Storms and their effects—strong winds, heavy rainfall, floods and landslides—were the major cause of extreme weather damage in 2019, Germanwatch said. Of the 10 most-affected countries, six were pounded by tropical cyclones.

The yearly report showed that developing countries are particularly affected by the impacts of climate change, which is widely considered to make these extreme events more frequent and severe in the future.

Recent research suggests the severity and the number of strong tropical cyclones will increase with every tenth of a degree in global average temperature rise, Germanwatch said.

In 2020—one of the three hottest years on record—the global average temperature was about 1.2 degrees Celsius above preindustrial times, according to the World Meteorological Organization.

“Poorer countries are hit hardest because they are more vulnerable to the damaging effects of a hazard and have lower coping capacity,” Vera Kuenzel, the group’s senior adviser on climate change adaptation and human rights, said in a statement.

Kuenzel said countries like Haiti, the Philippines and Pakistan “are repeatedly hit by extreme weather events and have no time to fully recover before the next event hits.”

“They urgently need financial and technical assistance,” said David Eckstein, a Germanwatch policy adviser, noting that they had yet to receive the full $100 billion a year in climate funding promised by wealthy countries.

Richer nations agreed to build up to providing that sum each year, starting in 2020, to help poorer countries adopt cleaner energy systems and adapt to the impacts of planetary warming.

Of the nearly $80 billion raised in 2018, the latest figures available, only about 20 percent was allocated for adaptation, despite repeated calls for that share to be raised to half.

Facing an average of 20 tropical cyclones every year, the Philippines has had to deal with back-to-back storms, from Typhoon “Pablo” (international name: Bopha) in 2012, Supertyphoon “Yolanda” (“Haiyan”) in 2013 and Typhoon “Ompong” (“Mangkhut”) in 2018.

The report also showed that the Philippines landed 13th overall in the number of recorded deaths due to extreme weather events in 2019, falling from fourth place in the previous year.

In November and December of that year, Typhoons “Tisoy” (“Kammuri”) and “Ursula” (“Phanfone”) battered central Philippines.

Amid the new coronavirus pandemic, Germanwatch said the current situation should emphasize that both risks and vulnerabilities were systemic and interconnected.

It cited the need to strengthen the resilience of the most vulnerable against various types of risks, whether climatic, geophysical, economic or health-related.

Last week, 3,000 scientists from more than 130 countries called on world leaders, decision-makers, and investors to ramp up efforts on adaptation amid the worsening climate crisis.

“Adaptation must be at the forefront of decision-making,” the scientists wrote ahead of the Climate Adaptation Summit this week. “If we act now, we have the opportunity to plan ahead and prosper. If we delay, we will pay.” —WITH A REPORT FROM THOMSON REUTERS FOUNDATION