Bernie and his mittens raise funds for charity 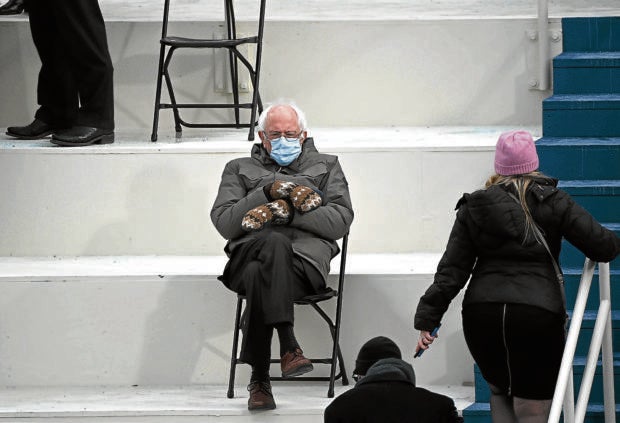 COOL AMID THE COLD This snapshot of US Sen. Bernie Sanders (D-Vermont) sitting nonchalantly in the bleachers on Capitol Hill before Joe Biden is sworn as the 46th president of the United States on Jan. 20 has spawned memes that had people in stitches. —AFP

American Sen. Bernie Sanders, the famed curmudgeon photographed at US President Joe Biden’s inauguration wearing mittens and a scowl behind his mask in an image that instantly became a meme, said on Sunday he was happy it might help raise millions for charity.

Lifting spirits around the world since it went viral, the meme depicts everything from Sanders’ mittens touching Michelangelo’s Hand of God in the Sistine Chapel to the Vermont Democrat helping actor Demi Moore mold clay at the pottery wheel from the film “Ghost,” to Sanders joining the World War II Yalta Conference in 1945, seated next to British Prime Minister Winston Churchill, US President Franklin Roosevelt, and Soviet leader Joseph Stalin.

Asked by CNN on Sunday whether he was enjoying the meme as much as the rest of the world, the 79-year-old gave an uncharacteristic grin and said he was overjoyed that his handwoven mittens, blue mask, and trademark glower could be turned into gold for needy Americans.

“Not only are we having fun but what we are doing here in Vermont is we’re going to be selling around the country sweatshirts and T-shirts, and all of the money that’s going to be raised—which I expect will be a couple of million dollars—will be going to programs like ‘Meals on Wheels,’ that feed low-income senior citizens,” Sanders said.

“So, it turns out actually to be a good thing, and not only a fun thing,” he said.

Vermont teacher Jen Ellis said on Twitter she gifted Sanders the mittens, which she knitted from repurposed wool sweaters, two years ago.

Featured since in everything from Japanese animé art to 1960s album cover copies, Sanders stood out among the designer garb at the ceremony for his mittens, a snowboarding jacket made by Vermont company Burton, and carrying a large manila envelope.

“I’m convinced Senator Sanders would have dressed exactly the same to his own inauguration had he won,” said one Twitter user. —REUTERS