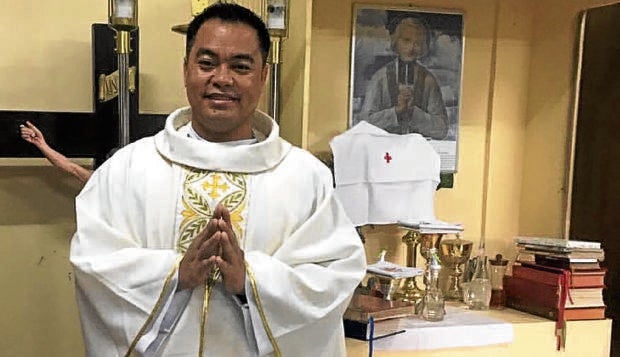 CAGAYAN DE ORO CITY—On Sunday, Fr. Rene B. Regalado told colleagues at St. John XXIII College Seminary in Pal-ing, Patpat village in Malaybalay City, Bukidnon province, that he was picking up his bike helmet at another seminary 8 kilometers away.

He did not make it to the cycling meet the next day with other priests, their way of keeping themselves fit amid the coronavirus pandemic.

Police found the bloodied body of Regalado, 42, with bullet wounds in the head, around 7:30 p.m. on Sunday near his service vehicle, a Chevrolet SUV, and the gate of the Malaybalay Carmelite Monastery close to the seminary.

He had contusion in the left eye and his left arm was tied with a white shoelace, said a police investigator, Police Staff Sergeant Jeffrey Lloren.

The lawmen were responding to calls by people in the monastery after they had heard gunshots that night.

Police found a Colt .45 pistol with 10 bullets and one empty shell at the scene. Fr. Virgilio Delfin, Malaybalay diocese official spokesperson, told the Inquirer that Regalado left his seminary at 1 p.m. to go to the city, about 6 kilometers away.

“He said he was still meeting somebody,” Delfin said, adding that the priest was dropping by at their other seminary in Impalambong village to get his bike helmet.

Delfin said Regalado had earlier told him that he had been receiving death threats since December last year. “The [one sending the death threats] kept changing his number,” he said.

Delfin said the priest never had any enemy and was only active in the diocese. “He was a singer, he actively sings in the diocese,” the official added.

“As a priest, his work is to serve the community,” Delfin said. “Help us to seek justice, not only for all the priests but also for the family, who are grieving for their loss.”

Locally known as “Paring Bukidnon,” Regalado had been endorsing farmers’ causes and organic farming in his social blogs. He was ordained on Oct. 18, 2007, by Bukidnon Bishop emeritus Honesto Pacana.

He took his college seminary formation at St. John XXIII in Malaybalay.

The Malaybalay Diocese condemned the killing of Regalado and demanded justice for him.

“The Diocese of Malaybalay with its clergy, consecrated persons and lay faithful, especially the Regalado family in San Jose Parish, Sinayawan, Valencia City are deeply wounded and saddened by the news of [his] passing,” the diocese said in a statement.

A peace group composed of church leaders also denounced the killing, which came more than a week after a lawyer, Winston Intong, was shot dead, also in the city.

“The killing of a priest and of a lawyer, means the level of impunity in our society has reached a deplorable level,” said Bishop Felixberto Calang, an Iglesia Filipina Independiente official and the main convenor of Sowing the Seeds of Peace.

“If lawyers and priests get killed that easy, what more for those coming from the marginalized sectors?” said Calang.

Regalado’s body was brought to Villanueva Funeral Homes on Sunday night. His family requested for an autopsy, according to police investigator Lloren.

The wake will be held at San Isidro Labrador Cathedral in Malaybalay and his body will be buried at the Catholic cemetery in Malaybalay. INQ