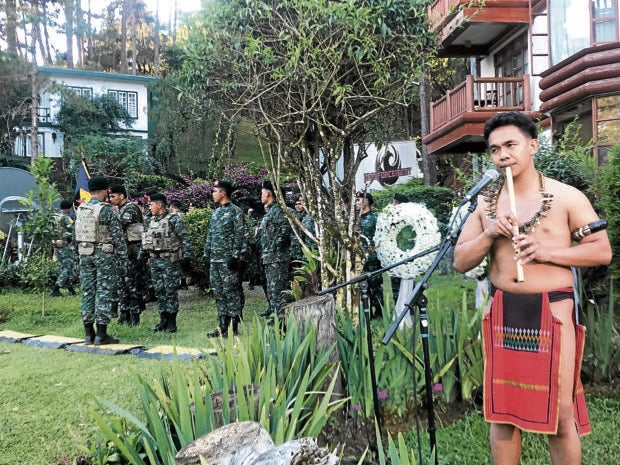 REMEMBERING THE FALLEN A memorial park for the fallen 44 Special Action Force troops is found inside the Camp John Hay Manor in Baguio City, which was inaugurated during the fifth commemoration of the tragedy on Jan. 25, 2020, as shown in this photo. A low-key sixth year memorial is held in the same area on Monday. —VINCENT CABREZA

BAGUIO CITY—Six years after 44 police commandos were killed in a botched mission to capture a Malaysian bomber in Mamasapano town, Maguindanao province, Baguio Mayor Benjamin Magalong and their families are still upset that no one has been prosecuted for their deaths.

“I served as witness for the families in the last case [filed with the Office of the Ombudsman], but it was dismissed [four days before the 2020 commemoration of their deaths],” Magalong said.

The mayor, who then hea­ded the Philippine National Police-Criminal Investigation and Detection Group, led an investigation that found then President Benigno Aquino III liable for the Jan. 25, 2015, operation that left 44 members of the Special Action Force (SAF), the elite PNP unit, at the mercy of Moro rebels.

Their aim was to capture the Malaysian bomber Zulkifli bin Hir, also known as Marwan.

“Their families are coping better now unlike before when they were angry and heartbroken,” Magalong told reporters after attending a low-key memorial at the SAF 44 Memorial Park inside Camp John Hay here on Monday.

“[We are] still waiting for justice to be served [because] until now, no one has been punished,” the mayor said.

In Malacañang, President Duterte said it was not only the country that lost valiant officers but also families who “lost their husbands, fathers, sons, brothers, friends and colleagues whose memories will forever be in their hearts.” The nation owes the families and loved ones of the SAF troopers a debt of gratitude that cannot be repaid, he said.

“An enduring testament to the unyielding commitment of our uniformed personnel to fight all threats to our national security, this heartbreaking incident serves as a painful yet necessary reminder to all of us that the struggle for lasting peace comes with a very heavy price,” Mr. Duterte said in a statement. 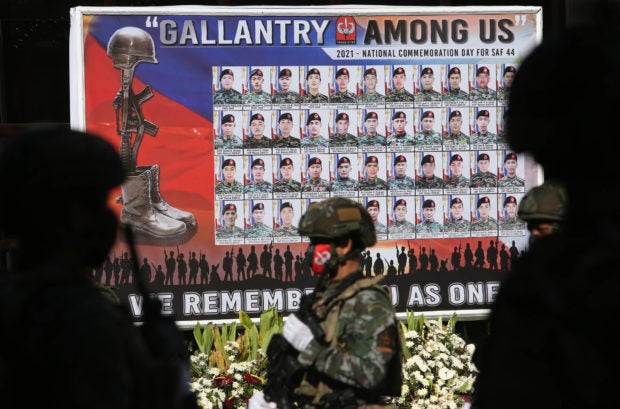 KILLED IN ACTION Special Action Force (SAF) commandos on Monday lead the National Day of Remembrance honoring their 44 colleagues who died in a police operation to arrest Malaysian bomb maker Zulkifli bin Hir, alias Marwan, in Mamasapano, Maguindanao, six years ago. Relatives of the slain troops say no one has been punished for the lapses that led to the deaths of their loved ones. —MARIANNE BERMUDEZ

Magalong said the probe he led found retired Police Director General Alan Purisima and former SAF chief Getulio Napeñas to be equally responsible for bad decisions and miscommunication that allowed the SAF 44 to be separated, boxed in and killed in Mamasapano.

But the Sandiganbayan dismissed the charges of graft and usurpation of authority filed against Purisima and Napeñas on Jan. 21, 2020. A year earlier, the same charges filed against Mr. Aquino were withdrawn by Ombudsman Samuel Martires.At the Philippine National Police Academy (PNPA) in Silang, Cavite province, the bravery and heroism of the SAF 44 would remain an inspiration to every police officer, Police Brig. Gen. Rhoderick Armamento, PNPA director, said on Monday. 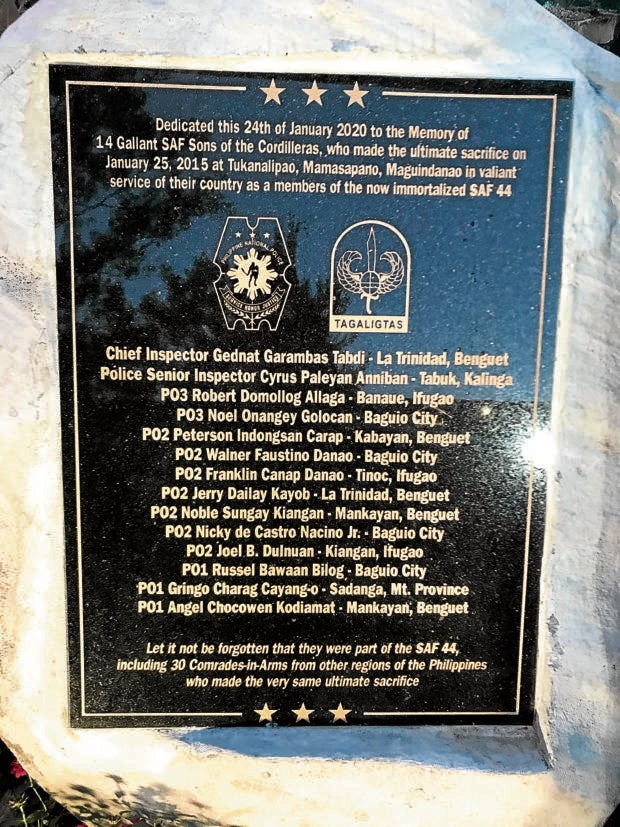 MARKER The names of the 44 policemen from the Special Action Force (SAF) who died in a botched operation in Mamasapano, Maguindanao, on Jan. 25, 2015, are immortalized in a marker installed inside the SAF 44Memorial Park in Camp John Hay in Baguio City during the fifth anniversary of their death on Jan. 25, 2020. —VINCENT CABREZA

Four of the SAF 44 were graduates of the PNPA.

“[Had there been] proper coordination [with our forces during] the police operation, that deadly incident would not have happened,” he told the Inquirer by phone on Monday.