Red-tagging, as explained by an AFP top brass and a premier activist 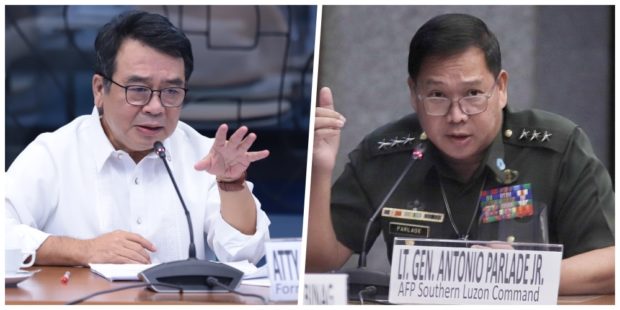 MANILA, Philippines — Just a few months ago, military and government officials were rebuked for Red-tagging apparent critics, including celebrities, of the Duterte administration.

These hushed as holidays came and many had worried about the surge of Covid-19 cases in the country, especially as the government continues to scramble for vaccine supplies to inoculate its citizens.

But a verbal fight erupted anew between activists, advocates and left-wingers, and government security actors when the Department of National Defense (DND) unilaterally terminated its accord with the University of the Philippines (UP) Diliman, which the military alleges as a hotbed of communist recruitment.

INQUIRER.net recently talked to Bayan Muna chair and former Rep. Neri Colmenares and National Task Force to End Local Communist Armed Insurgency (NTF-ELCAC) spokesperson, Southern Luzon Command chief Lt. Gen. Antonio Parlade – two of the most prominent personalities from each side of the fence – in hopes of presenting a clearer view of the issue that has been blurred by word war.

Colmenares said observations that state officials’ Red-tagging activities only intensified during the Covid-19 pandemic were inaccurate.

For him, the escalated Red-tagging of government critics was directly linked to the upcoming elections.

The Makabayan bloc, where Bayan Muna and other Red-tagged party-list groups belong, have firmly denounced the Duterte administration’s Covid-19 response, the Anti-Terrorism Law, and the killings of human rights defenders and activists.

Hence, Colmenares thinks that silencing critics and making them think twice about voicing concerns and opinions – and eventually kicking the carping Makabayan bloc out of office – is a way to weaken the opposition before the 2022 national elections.

“One of the reasons why they’ve been planning to Red-tag is because dissent and criticisms are mounting, so they need a more active tagging […] to stifle (dissent).  That’s the real intention of Red-tagging, it has been going on since the time of former President Ferdinand Marcos, to silence critics as you would stay quiet after being Red-tagged,” Colmenares said in Filipino.

“The second purpose of Red-tagging based on our analysis, the reason why it seems to be on the rise recently because the elections are near. And I think, our analysis here, they are concerned that their candidates are not faring well in the survey, if there are surveys going out, it does not represent their actual candidates,” he added.

According to Colmenares, he and members of Otso Diretso – the opposition senatorial slate of the Liberal Party and its allied groups in the 2019 elections – were subjected to Red-tagging even before the campaign. But allegations died down eventually, which Colmenares took as indicative of electoral propaganda.

“During the election season itself, they engaged in Red-tagging the Otso Diretso plus me. And then after the elections, it disappeared, so it seems there is an electoral agenda for Red-tagging.  And one of the reasons there I think is because they are sure that Makabayan would campaign hard against their candidates, and we will campaign for the opposition,” Colmenares explained.

“They believe if they Red-tag us, one of the electoral machinery will be crippled and that will weaken the opposition. I’m not saying that we’re the top group, but what I am trying to say is that there would be an impact to the opposition because you would have lost nationwide machinery,” he added.

But while Parlade admitted that part of the goal is to disqualify the Makabayan bloc members from running for Congress again, he was adamant that Red-tagging or their anti-communist drive is not hinged on silencing dissent and attacking critics of the government.

Parlade also maintained that no Red-tagging happened when they say people or groups are part of the communist movement, as it is more of a matter-of-fact statement.

“Again, that’s not Red-tagging.  As we said, we are only repeating and echoing what (CPP founder) Joma Sison said, the things that we read in the Philippine Revolutionary Web Central, what we see in the International League of People’s Struggle, NDFP.org, and the photos they post, what can [you] call those?” he asked.

According to Parlade, Red-tagging activities go back to the root issue: stopping lawless violence perpetrated by the CPP-NPA which, he said, Makabayan and some above-ground activists support.

“That’s part of it (disqualification), but eventually that’s what we want to happen because it has been very clear to us, the NTF-ELCAC, it is very clear that they have a participation in the armed violence, here in the armed rebellion,” he said.

“That’s why they are fuming and afraid of the Anti-Terror Law, if that is enforced because acts constituting support to terrorist groups are defined, there are supposed preparatory acts prohibited there, and what are these? Involvement in planning, involvement in preparations for some activities to be conducted by the communist party,” he added.

Parlade said he is absolutely sure the personalities they accuse of being CPP card-bearing members – like Colmenares – have been involved in some way in the armed rebellion, adding the former lawmaker was part of the communist rebels’ activities in the Negros provinces.

“Yes, 100 percent.  And as I have said, it’s not for me, well, to decide on the cases but I have been involved in the discussions that’s why the evidence we have against them [is] huge.  The testimonies from the former rebels from Negros, his hometown province, are actually incriminating,” Parlade continued.

“So how does he evade that, those are former rebels, whom he was with, checking the conditions and planning there in Negros?” he asked again.

Red-tagging activities by government officials flared up when activists and administration critics fought the passage of the then Anti-Terrorism Bill, which, they insisted, has vague provisions that may lead to wrongful arrests. This, they added, could be used as the government’s weapons against dissent.

Makabayan bloc’s opposition to the measure – which amended and placed more teeth on the Human Security Act of 2007 – was considered by state agents as alleged proof that the group is indeed part of the local communist movement.

After the bill was passed into law, activists continued to oppose the Anti-Terrorism Act, and further, the government’s supposedly harsh Covid-19 lockdown protocols.

The government’s Red-tagging activity was likewise one of the highlights in budget deliberations at the House of Representatives, where the Makabayan bloc belongs.

Left-leaning lawmakers swore not to approve the 2021 budget of the Presidential Communications Operations Office (PCOO) unless Undersecretary Lorraine Badoy issues an apology for Red-tagging some of the lower chamber’s members.

Badoy, who is also part of NTF-ELCAC, was asked to apologize after claiming that lawmakers in the Makabayan bloc are terrorists because they are supposedly ranking officials of the Communist Party of the Philippines (CPP) and New People’s Army (NPA). She also claimed the left-leaning lawmakers were directly involved with the planning of rebel attacks on government forces and installations.

In response, however, she offered her resignation if the lawmakers would condemn alleged CPP-NPA atrocities. The PCOO budget for this year was still approved.

By October, the issue took center stage again when Parlade was accused of mansplaining and Red-tagging actress Liza Soberano, as he warned about being associated with women advocacies group Gabriela. Soberano appeared in a forum on safe spaces for women organized by Gabriela, which the military said is an alleged legal front of the CPP-NPA.

Angel Locsin was also dragged into the issue by Parlade when she advised Soberano that even her fellow actress would not tell the truth about the CPP-NPA. Locsin is a relative of Bayan Muna’s Colmenares.

All these issues eventually sparked a Senate hearing, where activists and military officials were invited to clarify the mess.

During the Senate hearing, both parties stood firm on their opposing views. And so, INQUIRER.net asked them about their respective strongest possible evidence to assert that truth is on their side.

For Parlade, NPA members who surrendered to the government could prove it. He said ex-rebels pinpointed several members of above-ground groups as CPP-NPA members, including Colmenares.

“It’s not for me to decide on the cases but I have been involved in the discussions, that’s why I know that the evidence we have can implicate them. The testimonies of former rebels from Negros, from which he (Colmenares) is from also have a huge bearing. So how will evade that, those are former rebels who were with him in scouting and planning?” he pointed out.

But Parlade admitted incriminating information like bank transfers that would ultimately link Makabayan groups or any activist organization to CPP or even the NPA was not yet established by the Anti-Money Laundering Council (AMLC).

“Bank accounts, it’s hard to establish bank accounts but that’s on the process, well AMLC is in charge here, but there are movements of money. You know the deposits, they just amount to around $100 to $200, that’s coming from abroad, then they will close the account, and then open it again,” Parlade claimed.

“That’s what happened to the Rural Missionaries of the Philippines and the Belgian NGOs. Who are the beneficiaries of these accounts? It’s Gabriela. Now, who [is] accepting these funds?  Well, not all go to the Communist Party of the Philippines, NPA, but a good 60 percent goes to the CPP-NPA. And these are all corroborated by these former rebels, especially those involved in the financial transactions of the CPP,” he added.

Colmenares, a lawyer by profession, contended that the burden of proof should rest on the accusing party.

“It’s like being accused of killing a person’s sibling, wherein you would ask ‘where is your proof?’.  If they insist without any evidence, it may become harder to defend yourself, because the burden of proof shifts towards us when it is their job to set that proof, it is not our obligation,” Colmenares said.

“Secondly, did we espouse armed struggle? Where? When? What are the bills we filed? Maybe they say ‘it’s because you criticize government’.  So? There are different kinds of congressmen, there are those who side with any sitting president, there are those, whoever the president is, they are the opposition. It’s a personal choice,” he added.

The three-term lawmaker also urged people and even their accusers to look at their track record, and gauge for themselves whether their actions were in support of either CPP or NPA.  Also, Colmenares noted that budgetary documents have been with every administration, and no one claimed their funds were going to the NPA.

“They’ve been alleging that our funds go to the NPA, my God, they hold the documents on all funds on Congress, the DBM, the COA, even the Speaker of the House knows the documents […] We as opposition members know that administrations, since the time of former president Gloria (Arroyo), have been waiting for us to make mistakes so they can get documents but there’s none,” he said.

“Look at our track record in Congress. What bills did we file, was it a bill to espouse armed struggle? No. We sought lower electricity prices, increased pension payouts, land reform. If you notice in the transcript, they actually exposed their level of evidence, somebody said that if it talks like a duck, it quacks like a duck, and walks like a duck, then it must be a duck. This is the worst level of argument,” he added.