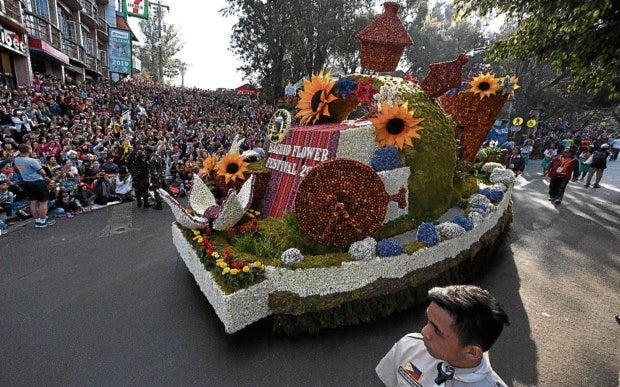 FESTIVE AIR Instead of parades and street dancing that highlighted the previous celebrations, organizers of this year’s Panagbenga Festival have laid out plans to spruce up the streets of Baguio City with sunflowers and alfresco, or open air dining, to recreate the festive air that attended the annual crowd-drawing event held every February. —EV ESPIRITU

BAGUIO CITY—Alfresco, or outdoor dining, which is frequently seen during the Baguio Flower Festival, or Panagbenga, along downtown Session Road, will reappear anew next month to give tourists and residents a semblance of the event, officials said.

This year’s festival was postponed due to fresh surges of coronavirus infections and the threat of new COVID-19 variants, said Andrew Pinero, Baguio Flower Festival Foundation Inc. spokesperson. It was moved to summer with scaled-down activities.

Donna Rillera-Tabangin, city planning officer, said the city government planned to spruce up the streets with Panagbenga sunflower décor. There will also be art installations detailing the history of the almost three-decade-old event which features colorful and extravagant street dancing and float parades, she said.

“We don’t want people to forget that [February] is Panagbenga month,” Tabangin said during a meeting with city officials on Wednesday.

As an alternative to the scrapped events, food and trade stalls mixed with street dining tables will be put up along Session Road on Sundays, she said.

About 70 stalls showcasing products of small and medium enterprises will be spread out to comply with physical distancing protocols.

The bazaar will also cater to tourists who have been visiting the city since October last year when it reopened its borders.

More than 20,000 people arrived in Baguio during the last quarter of 2020 and hundreds more have been cleared to visit in January and February, according to the city tourism office.

Mayor Benjamin Magalong ordered the closure of Session, one of the city’s busiest streets, to vehicular traffic on Sundays in response to a local crusade to make it a pedestrian zone. The campaign was initiated as an environmental measure by old-timers who want to reduce the city’s carbon footprint.

A Valentine’s Day event is scheduled at the Rizal Park before the opening of the Panagbenga “archway” at Burnham Park, which honors the festival’s roots.

Panagbenga was conceived by civic leaders to help revive the Baguio economy following the destruction left by the 1990 Luzon earthquake. —VINCENT CABREZA INQ