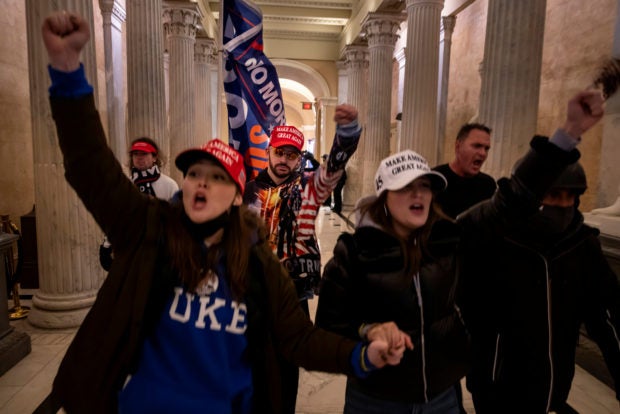 Supporters of US President Donald Trump protest inside the US Capitol on January 6, 2021, in Washington, DC. – Demonstrators breeched security and entered the Capitol as Congress debated the 2020 presidential election Electoral Vote Certification. (Brent Stirton/Getty Images/AFP)

WASHINGTON – The American far right is angry: Angry at Joe Biden, angry at Donald Trump, angry at the enigmatic “Q” and angry with themselves.

The online postings and chatrooms of extremists have been brimming with disappointment and dissent since the failed January 6 insurrection against Congress and the inauguration of Joe Biden as president.

Followers of the QAnon conspiracy movement — and its Delphic prophet Q — are most in disarray, their millenarian predictions of chaos and doom accompanying Biden’s elevation to the presidency not (or not yet) coming true.

Ultranationalists like the Proud Boys, armed militias such as the Oath Keepers, and dangerous white supremacists and neo-Nazis have been pushed further underground, with followers who took part in the Capitol attack being swept up by law enforcement.

Experts in extremism and domestic terrorism say these groups have been dealt a blow by Trump’s exit from power. 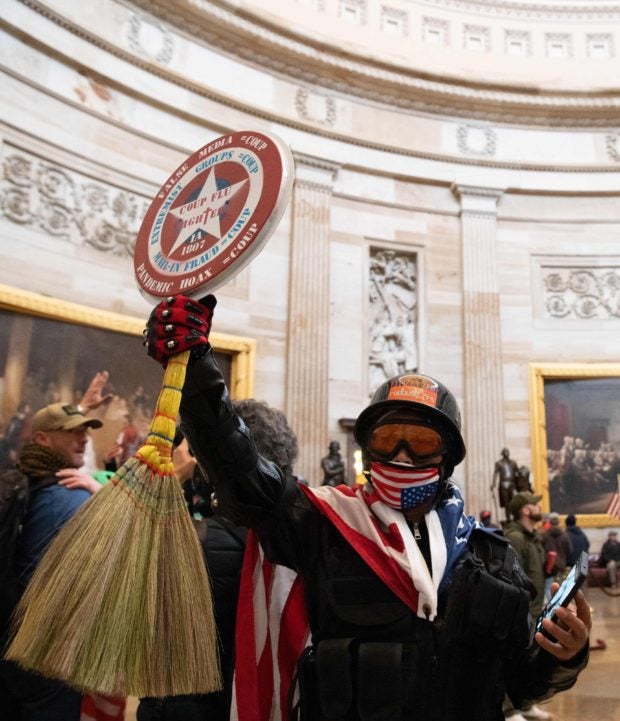 Supporters of US President Donald Trump protest in the US Capitol Rotunda on January 6, 2021, in Washington, DC. – Demonstrators breeched security and entered the Capitol as Congress debated the a 2020 presidential election Electoral Vote Certification. (Photo by SAUL LOEB / AFP)

But they also maintain that the groups are not disappearing, and in some ways are now more motivated toward undertaking more dangerous attacks.

The more extreme groups are looking at the large pool of disheartened QAnon types for recruits, they say.

“The rhetoric remains heated, people are not cooling off. They are not adjusting well to Biden,” said Michael Edison Hayden, senior investigative reporter at the Southern Poverty Law Center, which researches extremism.

Far from depleted, said Colin P. Clarke, Director of Policy and Research at The Soufan Group, “the energy and momentum that the far right has is stronger than any time in recent memory.

“The question is, what happens next?”

Many expected that Trump’s exit and the expulsion of extremists from Facebook, Twitter, Parler and other social media would calm things. Instead, it has added to the furor and galvanized the disparate far-right groups.

Hayden said the deplatforming by social media companies of users they consider beyond the pale is “becoming a unifying grievance.”

Most have relocated to a few welcoming platforms, foremost Telegram, where new QAnon and Proud Boys pages have hundreds of thousands of followers.

“The infrastructure really still exists” for the far right to convene, said Hayden.

QAnon began in late 2017 with cryptic statements from the mysterious Q on the 8kun website.

No one knew who Q was, but his statements mobilized Trump followers to believe there was a Democratic and “deep state” plot against the president.

As time passed they absorbed other conspiracy theories, including one about a global child kidnapping racket, and bizarre end-of-times predictions.

And Trump’s tweets, campaigns and rallies became a focal point for Q followers.

After his election defeat, they gave momentum to his “Stop the Steal” campaign centered on the false claim that Biden’s victory was somehow fraudulent.

That led directly to the January 6 Washington insurrection in Trump’s name that left five dead.

But Biden’s inauguration Wednesday and Trump’s quiet departure to Florida closed that door.

Many are even angry that Trump hasn’t clearly defended the more than 120 who arrested and hundreds more under investigation for the Capitol attack.

But the far right “is coming to terms with” his departure and regrouping without him, said Hayden.

QAnon followers though were dealt a second shock.

On Wednesday Ron Watkins, whose father controls 8kun and who many believe is or knows the real “Q,” announced he was quitting the movement and wiped out all of 8kun’s QAnon archives.

“We gave it our all. Now we need to keep our chins up and go back to our lives as best as we are able,” he posted on Telegram.

“We have a new president sworn in and it is our responsibility as citizens to respect the Constitution.”

“That was a massive body-blow to the movement,” said Karim Zidan, an investigator for Right Wing Watch.

But Zidan said the movement has proven it can live without Q.

QAnon “influencers” with tens of thousands of followers, and the public figures who drove Trump’s “Stop the Steal” campaign, like attorneys Lin Wood and Sidney Powell and ex-national security advisor Michael Flynn, are inspiring the movement to continue.

Worrying is the potential for moderate QAnon and Proud Boys followers to be “radicalized” online by more violent right-wing extremists.

They only have to peel off a small portion from those groups to build networks capable of destructive violence, noted Clarke.

“There are people out there committed to attacks,” he said.

He compared the level of anger to the early 1990s, which saw several domestic attacks including the 1995 Oklahoma City bombing that killed 165, by anti-government extremists.