LGBT politicians break barriers across US in historic election wins 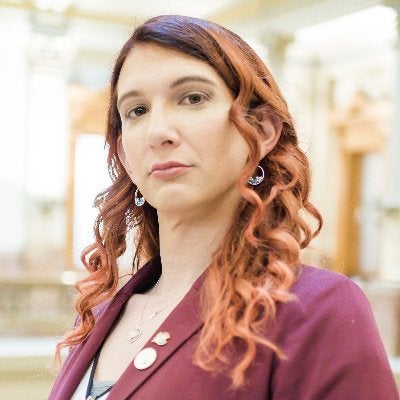 WASHINGTON — When Brianna Titone first ran for a seat in the Colorado House of Representatives, she was viewed as an unlikely candidate, and her opponents didn’t bother to say much about her being a transgender woman.

But after winning the seat in an upset and becoming the first transgender legislator in state history, a rival lawmaker voiced robocalls claiming Titone “wants to force a radical sexual agenda on every Coloradan.”

Yet that didn’t stop voters in Titone’s suburban Denver district from giving her a second term — one of hundreds of wins across the United States by politicians from the LGBT community, for which 2020 was their most successful election cycle in US history.

“We experienced nasty attacks, personal attacks from my colleagues, not just conservative groups,” Titone told AFP about her race. “But we turned that around and we made hay when the sun was shining.”

The LGBTQ Victory Fund advocacy group said that of the 782 out candidates at all levels of government who appeared on the ballots voters also used to unseat Donald Trump as president in favor of Joe Biden, 334 won their races in November, more than ever before.

“As we run more out LGBTQ officials (and) they are successful, they lead successfully, that inspires more people to come out and it changes attitudes,” said Annise Parker, the group’s president and CEO. “As attitudes change, it’s easier to be elected.”

American laws that once openly discriminated against gay, lesbian and transgender people have been dismantled in recent years, most notably with the Supreme Court’s 2015 decision to allow same-sex marriage nationwide.

Biden, who took office on Wednesday, has unambiguously embraced LGBT rights, issuing an executive order reaffirming protections against gay and transgender discrimination and also appointing a gay man as transportation secretary and a transgender woman as assistant health secretary, both firsts.

That’s a break from Trump, who attempted to strip transgender people of protections in the workplace and bar them from the military, decisions Parker said pushed many gay people into politics — although most candidates who triumphed last November did so in Democratic-leaning states or districts.

“I can’t tell you how many candidates I spoke to over the last couple of years who said, ‘I’m running because I want my country back,'” she said.

“The fact that I ran as an openly trans person and there was no pushback at all, from any angle, it made the statement that the people of Kansas are ready for this,” she said in an interview.

When it comes to gay Republicans, they are few and far between, with the LGBTQ Victory Fund saying they were aware of 19 Republican candidates — seven of whom won.

After entering the race for a House of Representatives seat in Tennessee, Eddie Mannis began to hear a strange critique: he wasn’t Republican enough.

“I really then understood what that was code for,” Mannis said. “I think ‘not Republican enough’ from some people means that, ‘oh he’s a gay man.'”

Mannis nonetheless became one of the first two LGBT lawmakers in the state legislature, along with a Democrat who identifies as bisexual.

He will join a Republican caucus whose lawmakers have backed bills to restrict transgender people’s participation in school sports and protect adoption agencies that don’t work with same-sex couples.

“It will be important to me to share a different opinion that they’ve probably never heard before. I think that’s what I really bring to the Republican Party, but I’m not there to shove it down their throats,” he said.

Yet the campaign trail isn’t the only place LGBT politicians can face opposition because of who they are, as Titone learned after first being elected in 2018.

At the Colorado state capital, some lawmakers didn’t take kindly to her presence, only reluctantly acknowledging her in the halls.

Two legislators would go so far as to deliberately misgender her, addressing Titone as “mister chair” when it was her turn to preside over the House chamber.

Despite that, her message for aspiring LGBT lawmakers is simple: keep going.

“If you feel like you really have a chance to do it, just do it, because somebody has to be the first, and you won’t be the last,” she said.