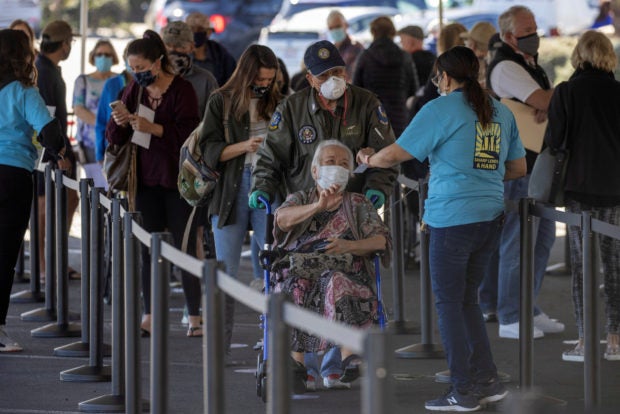 People wait in line to be vaccinated at a super vaccination station set up in an empty department store during the outbreak of the coronavirus disease (COVID-19) in Chula Vista, California, U.S., January 21, 2021. REUTERS/Mike Blake/File Photo

SACRAMENTO, Calif. – Jerry Shapiro, a 78-year-old pharmacist from Los Angeles, is at the top of the list of Californians now eligible for the COVID-19 vaccine, but more than a month after the state began inoculations, he has yet to receive one.

Shapiro said he has spent hours calling multiple health agencies and making fruitless computer searches, an experience familiar to many people across the United States, as the days-old administration of President Joe Biden races to bring the country’s slow, chaotic vaccine rollout up to speed.

“Why not make it easy?” asked Shapiro, who is also concerned about his wife because of medical conditions that would make her particularly vulnerable to the virus. “Have it in your neighborhood. Set up an appointment, get your shot and be done.”

The United States is the nation hardest-hit by COVID-19, with 24.51 million cases and 409,987 deaths by early Friday morning. More than 4,000 Americans died of the disease on Thursday for the second day in a row.

Even so, vaccine rollout, which the administration of former President Donald Trump left to the states to carry out without a federal blueprint or sufficient funding, has proven to be choppy.

From California, where distribution has varied from county to county, to New York where the largest city in the nation is running low on supply, states and healthcare providers have struggled to acquire, store and distribute vaccines.

In New Jersey, Governor Phil Murphy said the state’s vaccination program had managed to get 70% of its vaccine supply into people’s arms, but that a federal program within the state to help nursing home residents had distributed only 10% of its supply.

The country’s top infectious disease expert, Dr. Anthony Fauci, said on Friday the federal government had put too much of the responsibility for distributing the vaccine on state governments.

“States were doing things that clearly were not the right direction – and that’s unfortunate,” Fauci said on CNN.

Instead, he said, the administration should collaborate with the states to help them plan their rollouts and make sure that vaccines got into people’s arms.

Fewer than half of the nearly 38 million vaccine doses shipped to date by the federal government have actually made it into the arms of Americans, the U.S. Centers for Disease Control and Prevention (CDC) reported on Thursday.

Some individual states have lagged behind with just a third or 40% of their vaccine allotments being administered as of Thursday, which marked the one-year anniversary of the first locally transmitted COVID-19 case documented in the United States.

A key problem is organizing the distribution of vaccines to smaller clinics and pharmacies – rather than just to large medical centers and retail pharmaceutical chains.

In California, only a handful of independent pharmacies have been able to acquire vaccines for their customers – generally only in rural areas where the big chain stores are not present, said Sonya Frausto, a pharmacist in the state capital of Sacramento.

Shapiro, who owns an independent pharmacy in downtown Los Angeles, said customers have been calling daily seeking vaccines, but he has to tell them he has no supply.

He and his wife finally made appointments to receive a vaccine on Saturday, after repeated phone calls and hours on hold led them to healthcare giant Kaiser Permanente. The Shapiros are not Kaiser members, but the nonprofit is offering them shots nonetheless, Jerry Shapiro said.

In Sacramento, 65-year-old restaurateur Jami Goldstene would feel a lot safer at her public-facing job if she could get a vaccine. She is technically eligible because of her age, but has yet to be offered an appointment – or even find a way to make one – despite hours on the phone and the internet.

“It’s very frustrating,” she said. “I want to be over with it. I want to feel safe again.”