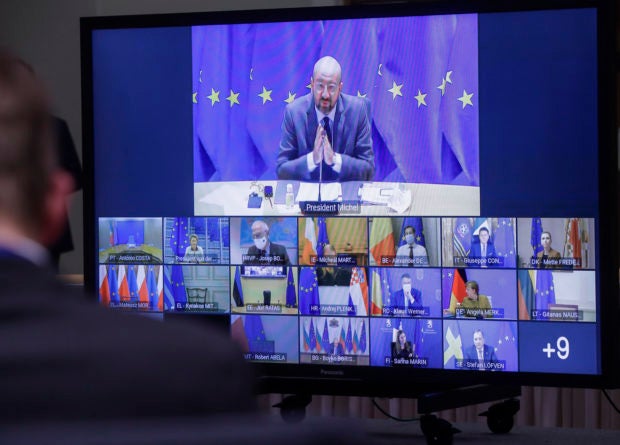 European Council President Charles Michel (up) is seen on a monitor as he chairs a video conference meeting of the members of the European Council focused on the Covid-19 (novel coronavirus) pandemic, in Brussels, on January 21, 2021. – The EU leaders will discuss coordination on the response to the Covid-19 pandemic, including the large-scale roll-out of vaccines and the deployment of all available instruments to limit the spread of the virus. (Photo by Olivier HOSLET / POOL / AFP)

BRUSSELS – EU leaders discussed tighter travel restrictions for Europe’s internal borders at a virtual summit Thursday as part of efforts to slow and detect the spread of new coronavirus variants.

Their gathering came just as the European Centre for Disease Prevention and Control said there was a “very high” probability of strains with much higher infectivity propagating in the 27-country bloc.

These mutations — which emerged in Britain, South Africa and Brazil — have already prompted bans or restrictions on travellers from those countries.

Now calls are increasing to also shut internal EU borders to all but essential travel, though German Chancellor Angela Merkel said such a step would be “the last resort”.

The goal first is to bring down the high infection rates in all EU countries, she said, noting that “if a country with a rate perhaps twice as high as Germany opens all its shops and we still have them closed, then of course you have a problem”.

If that is not possible, border controls “cannot be completely ruled out,” she said.

She and other leaders stressed coordination to avoid the experience in March when several member states panicked and closed off national borders unilaterally, triggering travel chaos.

That decision came to be seen as disastrous, disrupting the already stumbling European economy, and the leaders will work hard to find ways to thwart the variants while keeping factories and businesses running.

Belgium — wedged between Germany, France and the Netherlands — said it would plead for a “temporary” closure during its February-March holiday period.

In an interview with AFP before the summit, Foreign Minister Sophie Wilmes said Belgium wanted to ban “non-essential mobility” outside the country’s borders until at least the end of the February holidays.

She added that it would be “peculiar” to keep Belgian bars and restaurants closed but allow tourists to head abroad.

For now, the variants remain a tiny proportion of overall cases in most of the EU, and health officials are racing to give vaccination jabs before the mutants dominate.

Portugal was serving as an early warning. Its government on Thursday ordered schools closed for two weeks because of the rapid spread of the British variant. Prime Minister Antonio Costa said it accounted for 20 percent of infections and could make up 60 percent as soon as next week.

While there was no indication as yet the new variants were more deadly, there were concerns their faster spread could overload hospital intensive care capacity.

European Commission chief Ursula von der Leyen has said the bloc will soon expand vaccines beyond the BioNTech/Pfizer and Moderna ones currently authorised, aiming to inoculate 70 percent of adults in the EU before September.

The vaccination roll-out across the European Union has been disappointingly slow compared with the United States, the United Kingdom and Israel, a problem compounded by delivery shortfalls of the BioNTech/Pfizer doses.

The leaders are also expected to discuss the idea of using vaccine certificates, as championed by tourism-dependent Greece, but diplomats insisted this topic was at its early stages.

One EU official briefed on the ongoing videosummit said leaders agreed “a vaccination certificate should be a medical document and not travel document at this stage”.

Other officials pointed out that it was not yet known if vaccinated people could still transmit Covid-19 to others. They argued that having a vaccinated minority able to travel and enjoy post-pandemic life while others remained subject to virus restrictions would be unacceptable.

The summit also agreed to bolster the use in certain lower-risk situations of antigen tests that are cheaper, faster and less invasive — but less reliable — than nose-probing PCR swabs.

The leaders also approved the mutual recognition of test results across all EU countries.