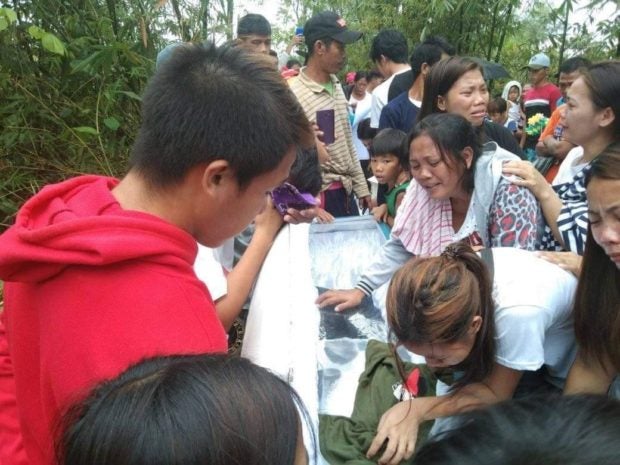 The family of Lahug village council member and Tumanduk alliance chairperson Roy Giganto grieves as they bury his remains on January 17. Giganto was among the nine Tumandok indigenous people’s group leaders who were killed in a police operation on December 30. Contributed photo

ILOILO CITY — The chief of the regional police crime laboratory in Western Visayas has been relieved of his post a day after he confirmed to reporters that seven of the nine leaders of an indigenous people’s group killed in a police operation in Capiz tested negative for gunpowder residue.

He was removed from his post on Jan. 20, the same day he was directed to explain his statements in an interview with radio station Bombo Radyo Iloilo on Jan. 19.

In the radio interview, Ancheta confirmed the negative paraffin test of seven of the nine leaders of the Tumandok or Panay Bukidnon tribe killed in the Dec. 30 police operation in Tapaz town in Capiz.

“I did not reveal the results and violated protocols. I did not offer the information,” Ancheta told INQUIRER.net in an interview.

“I was asked to confirm the information that the radio station already has and replied in the affirmative,” Ancheta said.

He said the regional crime laboratory submitted a copy of the test result only to the Criminal Investigation and Detection Group (CIDG) which had requested his office to conduct the test.

“We are not hiding anything and we cannot deny the truth,” he said.

Ancheta, who has been in the police service for 30 years, said he even refused to name those who tested negative or positive and referred further questions to the CIDG.

“I also explained during the interview that results of paraffin tests are not conclusive due to a number of factors and a negative result does not mean that the person tested did not fire a gun,” he said.

Paraffin tests are conducted to determine if a person has recently fired a gun based on gunpowder residue. Results, however, are deemed non-conclusive if used in court as evidence as residue of nitrates can also be left after handling other substances like those found in fertilizers, tobacco and pharmaceuticals.

The nine tribe leaders were killed in the CIDG-led operation in seven villages in Tapaz and two villages in Calinog town in Iloilo. Sixteen others were arrested.

Police and military officials have insisted that those who were killed fired first at police operatives who were serving a total of 28 search warrants for firearms and explosives.

They also accused those killed and arrested as leaders of the Communist Party of the Philippines and New People’s Army.

Eight Catholic bishops in Western Visayas and Romblon Island earlier issued a rare joint pastoral letter condemning the killings and calling for a “thorough investigation by an independent body to ascertain what really happened” during the police operation.

The Capiz chapter of the Integrated Bar of the Philippines has also offered free legal assistance to the families of those killed and arrested.

The Commission on Human Rights and the PNP’s Regional Internal Affairs Service are conducting separate investigations on the operation.