Taiwan invited to US inauguration for first time since 1979 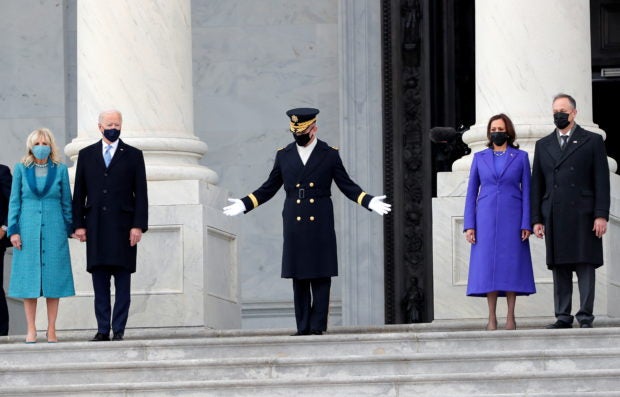 TAIPEI — Taiwan’s de facto ambassador to the US was formally invited to President Joe Biden’s inauguration in what Taipei said Thursday was a precedent-setting first since Washington switched recognition to Beijing in 1979.

Hsiao Bi-khim, Taipei’s envoy, posted a video of herself at Wednesday’s inauguration saying she was “honored to represent the people and government of Taiwan here at the inauguration of President Biden and Vice President Harris”.

Taipei’s foreign ministry said it was the first time in decades that a Taiwanese envoy had been “formally invited” by the inauguration’s organizing committee while the ruling Democratic Progressive Party described it as “a new breakthrough in 42 years”.

Taiwan split from China at the end of a civil war in 1949. Its 23 million people live under the constant threat of invasion by the mainland, whose leaders view the island as their territory and have vowed to one day take it.

Beijing balks at any official contacts with Taiwan and tries to keep the island diplomatically isolated.

Washington recognized Beijing over Taipei during the administration of President Jimmy Carter. But the US remains democratic Taiwan’s most important unofficial ally and is bound by an act of Congress to sell the island weapons to defend itself.

Since 1979 US presidencies generally trod a cautious diplomatic path on Taiwan in a bid to avoid angering Beijing as well as discourage Taipei from ever formally declaring independence.

But that changed dramatically under President Donald Trump who embraced warmer ties with the island as he feuded with China on issues like trade and national security.

Taiwan’s President Tsai Ing-wen secured an unprecedented phone call with Trump after his 2016 election win, a move that infuriated Beijing.

Trump also ramped up arms sales and diplomatic contacts, while one of his administration’s last foreign policy acts was to lift restrictions that limited how US officials interacted with their Taiwanese counterparts.

Biden’s Taiwan policy is less clear cut for now, but Hsiao’s presence at the inauguration hints at a continuation of his predecessor’s precedent-setting changes.

Kharis Templeman, a Taiwan-based expert at the Hoover Institution, described it as “a subtle gesture but a meaningful one.”

In a tweet to Biden after his oath of office, President Tsai said Taiwan “stands ready to work with you as a global force for good.”

Protecting the island from an invasion became one of the few issues to receive broad bipartisan support during the polarised Trump years, and politicians on both sides of the aisle have called on Biden to be more proactive in maintaining Taiwan’s freedoms.

“I commend the new administration for this invitation and encourage them to build upon the progress made on US-Taiwan relations to reflect the challenges and geopolitical realities we face,” he wrote on Twitter.