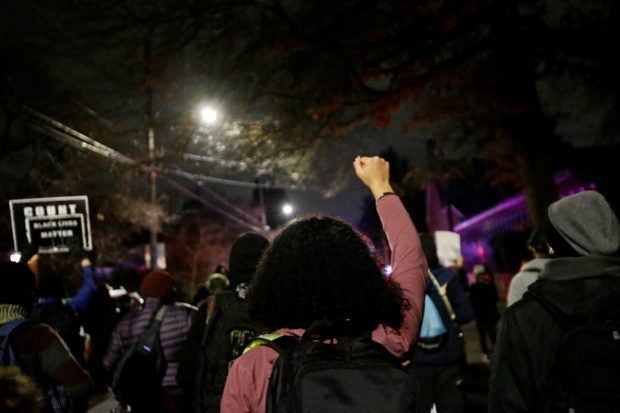 Anti-government and anti-fascist protesters vandalized a Democratic Party office and scuffled with police in Portland, Oregon on Wednesday, protesting the inauguration of President Joe Biden and demanding an end to police violence and imperialism.

Police said they arrested eight people on suspicion of criminal mischief, possession of a destructive device, riot, and reckless burning.

Social media video showed men dressed in black, their faces covered, breaking windows and the glass door at the Democratic Party of Oregon business office, spray-painting an anarchist symbol over the party sign.

“We don’t want Biden. We want revenge for police murders, imperialist wars, and fascist massacres,” read a banner they marched under.

Before descending on the Democratic Party office, some protesters from a group of about 150 scuffled with police on bicycles, but there were no major injuries reported, police said in a statement.

Police recovered some long poles and a large knife from the crowd and dropped one smoke canister to disperse the crowd, the statement said.

The arrested suspects ranged in age from 18 to 38.

“We respect the rights to assemble and speak, but it must be done lawfully. Criminal activity is not protected speech,” police Sergeant Kevin Allen said in a video message posted on Twitter.

For months Portland had been the scene of protests by civil rights, anarchist, and anti-fascist protesters who are occasionally opposed by right-wing militias and supporters of former President Donald Trump.

A Trump supporter was shot dead during one protest in August. Five days later, police shot and killed an anti-fascist protester who was wanted for that homicide.