The actions, fulfilling his promise to move quickly on Day One of his presidency, initiate the process of the United States rejoining the Paris climate accord and include the revocation of the presidential permit granted for the controversial Keystone XL oil pipeline. 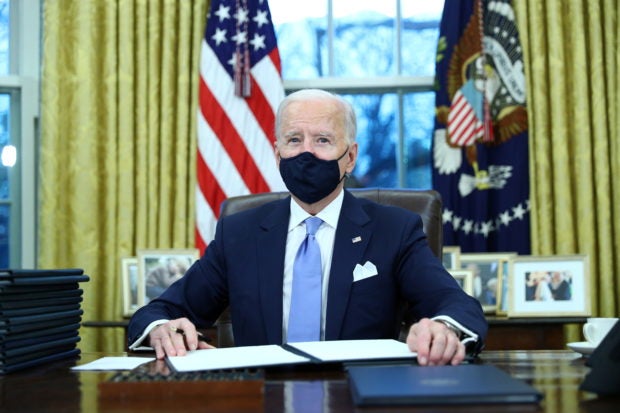 U.S. President Joe Biden signs executive orders in the Oval Office of the White House in Washington, after his inauguration as the 46th President of the United States, U.S., January 20, 2021. REUTERS/Tom Brenner

The steps Biden is taking will end a travel ban Trump put in place on some majority-Muslim countries. He is also calling upon his administration to strengthen the DACA program for immigrants brought to the United States as children.

The new president is also ordering the wearing of masks and social distancing in all federal buildings and on all federal lands and is ending a national emergency declaration that was the basis for diverting some federal funds to build a wall along the U.S.-Mexico border.