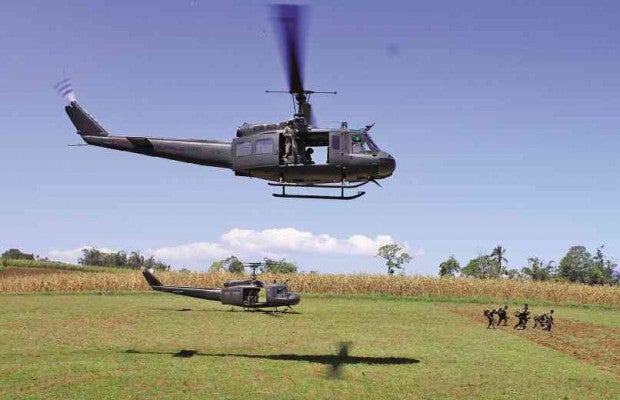 This file photo shows UH-H1, or Huey, helicopters unloading soldiers in Lumbatan town, Lanao del Sur province, as fighting between armed groups — supposedly belonging to the terrorist network Islamic State of Iraq and Syria — continues to rage in the province and other parts of Mindanao. (Photo by RICHEL V. UMEL / Inquirer Mindanao)

MANILA, Philippines — “The Senate is prepared to listen to our military for what they need — what comfortable level of budget they need for 2022 and in the succeeding years to sustain their efforts in modernizing our military.”

Senate Majority Leader Juan Miguel Zubiri made that statement on Tuesday when he took to the Senate floor to call attention to a recent series of accidents involving dated military aircraft that caused several deaths and injuries.

“Modernizing our military is giving our soldiers, who are among the best and bravest in the world, a fighting chance on the battlefield. It is the least we can do to our men and women in uniform who have sworn to protect the state and lay down their lives for it if necessary, and as proven in their many heroic feats,” Zubiri said, according to a statement issued by his office,

He made his speech after the latest accident, on Jan. 16, when an Air Force UH-1H, better known as a Huey, helicopter crashed in a field in Impasugong, Bukidnon, killing all seven passengers and crew.

Zubiri noted that smoke was seen coming out of its engine shortly before the crash.

He also enumerated other incidents that took place last year, all involving Air Force aircraft — another Huey last November, a Sikorski air ambulance in September, and yet another Huey in July.

These accidents killed nine people and injured several others.

“What happened in Bukidnon recently, and all the other military aircraft crashes which resulted in deaths of our military and civilian personnel, were senseless deaths,” Zubiri said. “Avoidable accidents, if only we were serious about modernizing our military.”

He pointed out that the Huey helicopter was already old and no longer fit to serve the military.

“Huey helicopters are in the range of 40 to 50-year-old air assets,” he said. “We need to modernize our military hardware and equipment, including our aircraft.”