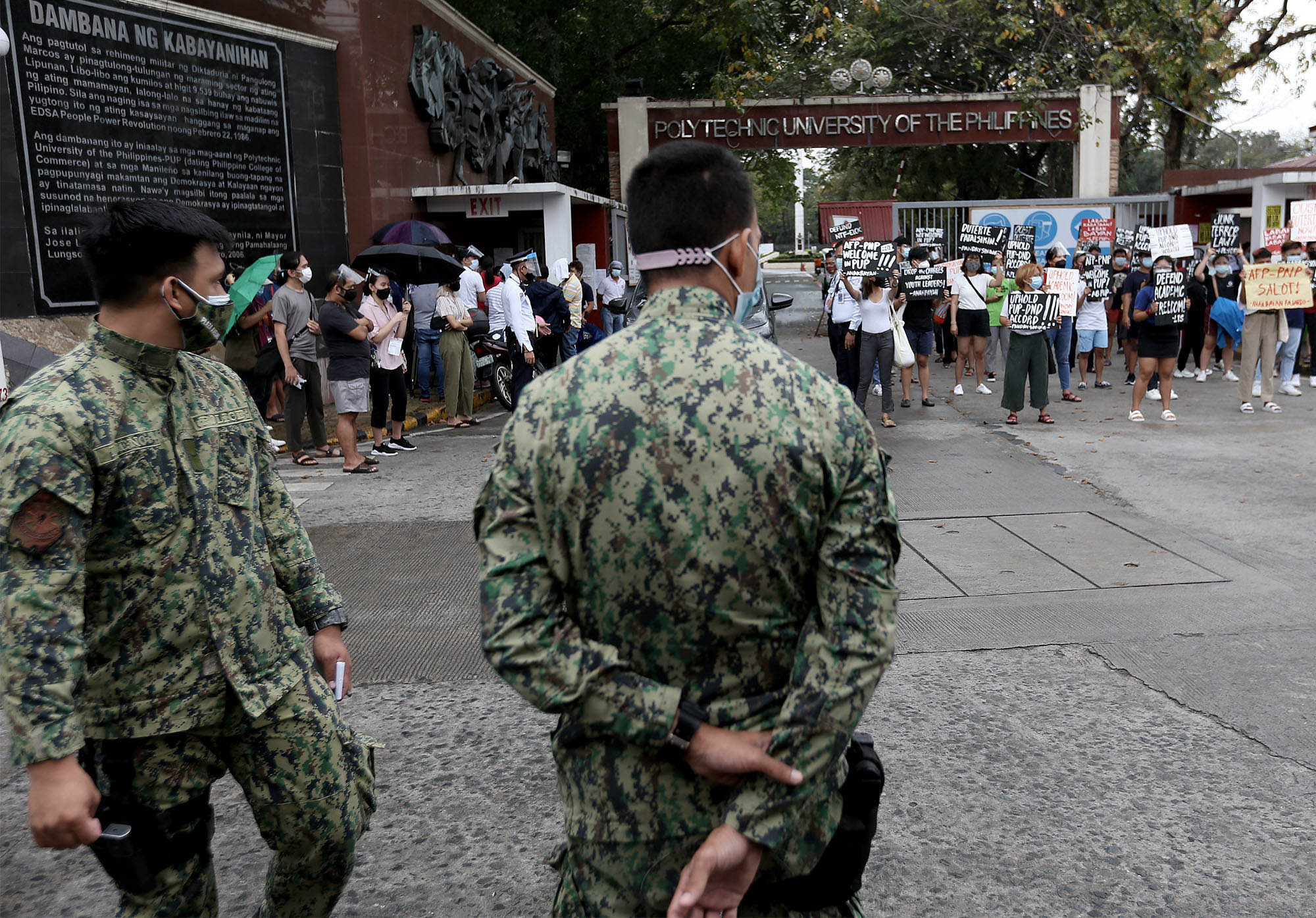 CLOSE WATCH Police officers on Wednesday keep a close watch on a protest against the possible termination of a 1990 agreement between the Polytechnic University of the Philippines and the Department of National Defense to ban police and soldiers from the school’s campuses without permission from its officials, except in emergencies. —RICHARD A. REYES

Another state university is in danger of losing its 1990 agreement with the Department of National Defense (DND) that bars security forces from entering its campuses without permission from school authorities after a proadministration party list lawmaker called for the scrapping of the accord.

Defense Secretary Delfin Lorenzana, who wrote UP president Danilo Concepcion that he had unilaterally abrogated the UP-DND agreement, said the accord was being used by the Communist Party of the Philippines (CPP) and its armed wing, the New People’s Army (NPA) as a shield for their recruitment.

“There’s a rumor about PUP having an agreement with the DND, but I have not seen a copy,” he told reporters. “But if you can present to me a copy, I will abrogate it also.”

Under the PUP-DND agreement signed on Aug. 21, 1990, police and military forces must give prior notification to the university president before conducting any operation on any PUP campus.

This rule will not apply to cases of hot pursuit and “similar occasions of emergency.”

Serving a warrant of arrest on any PUP student, faculty member or official must be done only after prior notification is given to the university president or director of the campus concerned. It cannot be done without the presence of at least two faculty members.

Ellenor Bartolome, the PUP student regent, and Jonero Dacula, central student council president, submitted a position paper to Cardema opposing the termination of the PUP-DND accord.

The Duterte Youth representative strongly supported the unilateral abrogation of the UP-DND pact and urged the defense department on Tuesday to cancel a similar agreement with PUP.

Repeating the same justifications cited by Lorenzana for scrapping the UP-DND accord, Cardema said the two agreements were “clear cases of special treatment that have been abused for the longest time.”

She said leftist groups abused the agreement “to shield them” and their “visiting NPA comrades” from arrest.

In their position paper, Bartolome and Dacula highlighted a key provision in the PUP-DND accord, which recognized the right of all students “to freely advocate their ideas on the campus with utmost tolerance, understanding and guarantee, without fear of interference and intervention or repression from the state, or any of its agencies and instrumentalities.”

In a separate statement, Bartolome shot back at Cardema’s “special treatment” remarks.

“The actual special treatment was given by the [Commission on Elections] when it allowed the party list a seat in Congress even when it is not registered and [its nominee] did not meet the age qualification,” she said.

In his press briefing on Wednesday, Lorenzana said one of the reasons he terminated the UP-DND agreement was the requirement imposed on the Philippine National Police and the Armed Forces of the Philippines to secure the consent of university authorities to perform their duties.

Specifically, he said, the police needed to get permission from UP officials before serving court-issued warrants, particularly on supposed CPP-NPA recruiters, on any of its campuses.

“You cannot surprise these people because we have to get the UP administration’s consent. Where in the rules of court can you see that? None,” he said.

Lorenzana said he was willing to hold a dialogue with the UP president if the state university could explain how some of its students and graduates were killed or captured in the company of communist rebels.

“Why did they (UP officials) fail to protect these young kids joining these organizations and they got killed? As a parent, I really feel sad for these kids for dying this way. If they can explain that then we’ll talk. If not, then forget it,” he said.

The defense chief said the agreement had “outlived its usefulness” and was no longer helping the people or the students because the rebel recruiters were “already embedded” in UP.

“Please understand we have nothing against UP. It’s not an attack against UP or the alumni. We just want to clean UP of bad elements within,” he added. —WITH REPORTS FROM JEROME ANING