Pagasa: Rain to persist due to new LPA, tail end of a frontal system 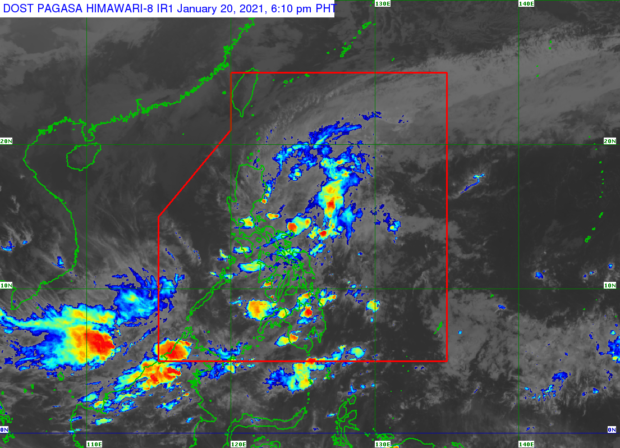 MANILA, Philippines — A big part of Luzon will still experience rain in the coming days due to combined effects of a new low-pressure area (LPA) and the tail end of a frontal system, state meteorologists said on Wednesday afternoon.

According to the Philippine Atmospheric, Geophysical, and Astronomical Services Administration (Pagasa), the LPA was last located 100 kilometers east of Baler, Aurora. The weather bureau, however, clarified that this LPA is different from the LPA spotted Tuesday, south of the Bicol Region.

Pagasa’s forecast showed that the LPA east of Aurora is not expected to become a tropical cyclone, but since it coupled with the tail end of a frontal system it may still bring moderate to heavy rains over Cagayan Valley, Aurora, and all the way up to Northern Quezon.

(Be cautious against possible flash floods especially those near rivers and those in low-lying areas, as landslides are also possible in mountainous areas.)

(Scattered light to moderate rains can also be expected in the following hours over Metro Manila, Bulacan, Nueva Ecija, the Cordillera Administrative Region, Mimaropa, Bicol Region, and the remaining parts of Calarbarzon, plus Eastern Visayas.)

The LPA is projected to move in a north-northwest pattern, which means it may traverse the provinces of Aurora, Isabela, and Cagayan until Thursday morning. It may dissipate after hitting land and mountainous areas near Cagayan Valley, Pagasa said.

Pagasa is also monitoring other cloud clusters that may become LPAs in the coming days, specifically those located northwest of Palawan and east of Bicol Region, according to Estareja.

As for other parts of Luzon and Visayas, Pagasa noted there might see generally fair weather albeit with occasional rains due to isolated thunderstorms.

Pagasa further advised fisherfolks in the northern seaboard of Luzon, western waters of Ilocos Region, and eastern coastline from Cagayan Valley to Quezon province, down to northern and eastern coasts of Camarines Norte, Camarines Sur, and Catanduanes against sailing as gale warnings are still up in these areas where waves may reach 2.8 meters to 4.5 meters high.

Read Next
Duterte Youth amid call to cancel PUP-DND accord: Academic freedom has nothing to do with it
EDITORS' PICK
‘NCR Plus’ to be under MECQ starting April 12 until April 30 — Palace
Pru Life UK receives four golden arrows for solid corporate governance
Pre-order the new vivo Y20s [G] to get a free TWS earphone
Malls adjust ‘NCR Plus’ operating hours for April 12-30 MECQ
Speed up your game with the new vivo Y20s [G]
Metro Manila to have shortened curfew hours from 8 p.m. to 5 a.m. under MECQ
MOST READ
Stop ‘creeping occupation’ of ‘militia’ boats in WPS, Pacquiao asks China
Bea Alonzo clarifies status of her relationship with Dominic Roque
Convicted former aide of Sen. Bong Revilla dies — BuCor
Locsin to China: ‘Then move out’
Don't miss out on the latest news and information.