Local governments rush to set up own vaccination centers 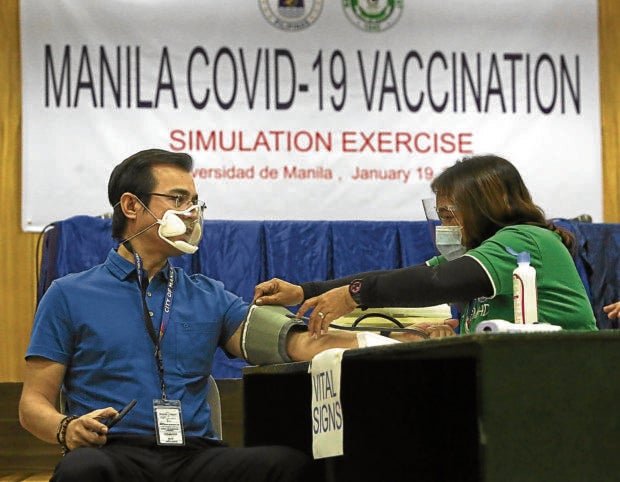 MANILA, Philippines — Local governments, particularly those in Metro Manila, are in a frenzy to set up their respective vaccination centers for their constituents in preparation for the arrival of the much-needed vaccines against the new coronavirus that they hoped would finally end the pandemic that had gripped the nation for almost a year.

The Manila local government on Tuesday conducted a simulation exercise for the city’s COVID-19 vaccination at the Palma Hall of the Universidad de Manila.

Medical workers and barangay health-care workers were deployed in booths to demonstrate the vaccination process.

“This is part of our road map to vaccination. In the coming months, vaccines will arrive in the country. In the coming weeks, vaccines available in the world may be approved by the regulatory agencies of our country,” Manila Mayor Francisco “Isko Moreno” Domagoso said during the simulation.

Vital signs of preregistered patients will be checked first, screened and verified before being inoculated.

Domagoso said these were equipped with uninterruptible power supply to ensure the integrity of the vaccines.

In Taguig City, three mega vaccine centers are expected apart from 40 off-site inoculation centers that would be set up in the different communities and in every barangay.

Taguig City Mayor Lino Cayetano said all three mega vaccination centers, including one located at the Lakeshore complex in Barangay Lower Bicutan, would be ready by February.

Taguig City public information officer Maricar Brizuela said another mega vaccination center might be located at the Center for the Elderly in North Signal Village.

Taguig City has linked up with Orca Cold Chain Solutions Inc. for the use of its 6,500-square-meter facility in Barangay Bagumbayan to store the vaccines. The city recently secured vaccine doses from AstraZeneca and is still in talks with other manufacturers.

She pointed out that the city plans to use 28 schools and health centers as vaccination hubs and are training 78 inoculators.

As Quezon City awaits the first shipment of vaccine doses from AstraZeneca, the city government is now focused on ironing out the logistics that come with a massive immunization program.

The first batch of the 1.1 million AstraZeneca vaccine doses are set to arrive by the third quarter this year, according to Joseph Juico, head of the QC Task Force on COVID-19.

In the meantime, the city is finalizing talks with a third party cold chain system that specializes in medical supplies for the logistics of the vaccine.

Two city-owned warehouses are also being prepared for the storage. The facility must also meet international standards, Juico said.

The city government of San Juan said it was prepared to inoculate thousands of its residents against the deadly virus.

Nearly 15,000 residents have expressed their willingness to be inoculated with the United Kingdom-made AstraZeneca vaccine, which has a 62- to 90-percent efficacy rate.

Mayor Francis Zamora said the city was still working to end the skepticism on the vaccination program through an information campaign he himself would lead.

“One important thing is to increase the trust and confidence of our constituents in the vaccination process. Of course you have to inform them, because one of the factors that they consider before deciding if they want to be vaccinated is the brand,” Zamora said.

Schools are particularly crucial for the city of Navotas, which only has one primary hospital within its jurisdiction of over 260,000 residents, said Mayor Toby Tiangco.

If all goes well, he expects they would be able to vaccinate 2,000 a day across 20 schools for one week.

Valenzuela City, which had secured 640,000 shots for 320,000 residents, is eyeing an average of one vaccination site per city barangay, according to Mayor Rex Gatchalian. These sites, he said, were an assortment of schools, health centers, hospitals and courts.