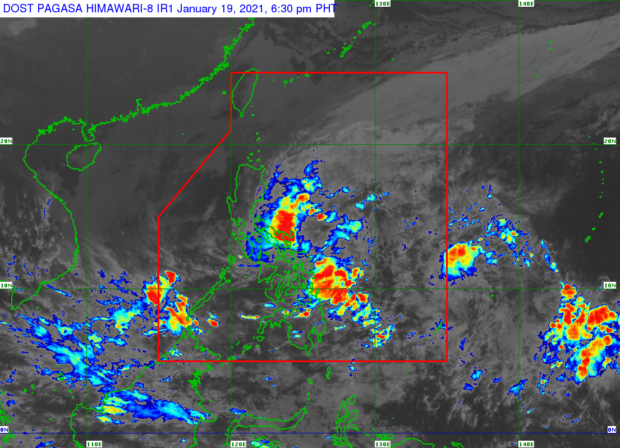 MANILA, Philippines — The low-pressure area (LPA) located between Southern Luzon and Visayas is expected to bring overcast skies and rain in the region but the state weather bureau said it would not develop into a tropical cyclone.

It was moving between the southern parts of Bicol Region and Panay Island and would likely go towards Mimaropa until Wednesday morning.

However, it noted that even if it hits land areas affected by the northeast monsoon or amihan, the chance of the LPA intensifying into a tropical depression remains low. State meteorologists also said they are still monitoring other cloud clusters east of the country which may turn into an LPA in the coming days.

On the other hand, other parts of the country, especially Western Visayas and the northern parts of Mindanao, may also experience rain although not as strong as those in areas near the LPA.

For Luzon, including Metro Manila, cloudy skies with light rain may still prevail because of the northeast monsoon, Pagasa noted.

Meanwhile, gale warnings are still raised over Northern Luzon including Batanes and Babuyan Islands, the entire eastern coastline of Luzon as well as northern and eastern coastlines of Eastern Visayas; and the coastal area of Ilocos Region and Palawan for the western side.

This was because waves in these areas may reach as high as 2.8 meters to 5.0 meters, Pagasa said, advising fisherfolk and sea transport operators using small boats to exercise caution due to rough seas.