In farewell video, Melania Trump says be passionate, but not violent | Inquirer News

In farewell video, Melania Trump says be passionate, but not violent 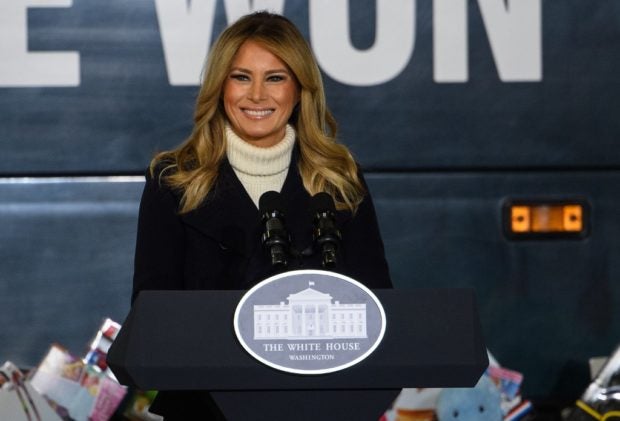 In this file photo taken on December 8, 2020 US First Lady Melania Trump addresses the Marines Toys for Tots drive at Joint Base Base Anacostia Bolling in Washington, DC. First Lady Melania Trump released a farewell message on January 18, 2021 as she prepares to leave the White House, saying that “violence is never the answer,” weeks after the president’s supporters stormed the US Capitol. Photo by NICHOLAS KAMM / AFP

WASHINGTON — First Lady Melania Trump released a farewell message Monday as she prepares to leave the White House, saying that “violence is never the answer,” weeks after the president’s supporters stormed the US Capitol.

In a formal, six-minute speech recorded on video, she made only a fleeting reference to her husband as she paid tribute to military families, pandemic health workers and those helping victims of opioid abuse.

“The past four years have been unforgettable,” the First Lady said. “As Donald and I conclude our time in the White House, I think of all of the people I have taken home in my heart and their incredible stories of love, patriotism and determination.”

“Be passionate in everything you do. But always remember that violence is never the answer, and will never be justified,” she said.

“When I came to the White House, I reflected on the responsibility I have always felt as a mother to encourage, give strength and teach values of kindness.”

The Trumps’ departure has been fractious, with the president refusing for months to accept the election result due to false allegations of fraud, and declining to congratulate his successor Joe Biden.

The outgoing president and his wife have also not invited Biden and his wife Jill for the traditional tea visit in the Oval Office, and will not attend Biden’s presidential inauguration on Wednesday.

“The promise of this nation belongs to all of us who do not lose sight of our integrity and values, use every opportunity to show consideration for another person, and build good habits into our daily lives,” Melania Trump, 50, said.

President Donald Trump has been largely out of the public eye since his supporters rampaged through Congress on January 6, triggering his historic second impeachment a week later.