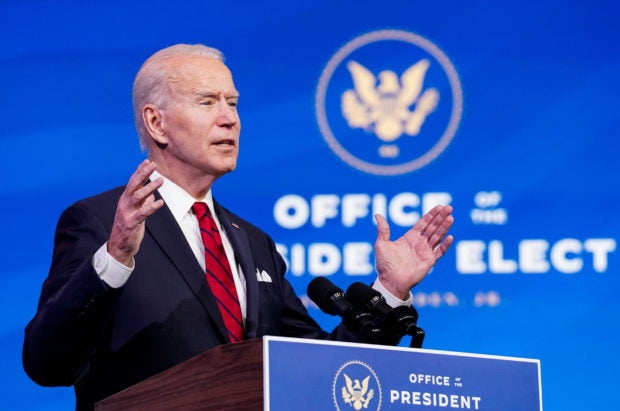 WILMINGTON, Del. — U.S. President-elect Joe Biden will cap a busy day of inauguration pageantry by using the powers of his new office to push policy changes on housing, student loans, climate change and immigration, a top aide said on Saturday.

Biden, who campaigned on a raft of promises to undo President Donald Trump’s legacy even before the novel coronavirus pandemic walloped the nation, will unveil “roughly a dozen” previously promised executive actions on Wednesday, incoming Biden chief of staff Ron Klain said in a memo distributed to reporters.

The actions to be taken on Wednesday include rejoining the Paris climate accords, reversing a travel ban on several majority Muslim countries, extending a pause on federal student loan payments, halting evictions and foreclosures, as well as mandating masks in inter-state travel and on federal property.

All of the measures were previously announced.

That measure, as well as Biden’s recent proposal for $1.9 trillion in spending on COVID vaccinations and economic stimulus, face uphill battles in a Congress narrowly controlled by Biden’s fellow Democrats.

A broader set of Biden’s “Day One” promises will be executed over the following nine days after inauguration, Klain said. Those measures include expanding COVID-19 testing and directing the government to favor American-made goods when it makes purchases.

Read Next
Lacson says charter ‘too nationalistic,’ backs reforms in economic provisions
EDITORS' PICK
Nestlé Philippines’ ‘NESCAFÉ Plan’ bags Grand Anvil at PRSP 56th Anvil Awards
Smart reinforces superiority with best speed and mobile video experience in PH
Every Filipino home can now be a smart home with realme TechLife
New 3,045 COVID-19 cases push PH total active cases to 40,074
LTO’s P500-M deal for screws draws scrutiny
How to lose a PH genius: Wesley So officially a US citizen
MOST READ
US lays out list of aid to ‘satisfy’ Duterte following VFA payment demand
How to lose a Filipino genius: Wesley So officially a US citizen
Robredo on Sara Duterte leading poll surveys: Why are Filipinos drawn to leadership of this kind?
Kris Aquino dispels rumors on son Josh getting married, thanks Ogie Diaz for defending him
Don't miss out on the latest news and information.