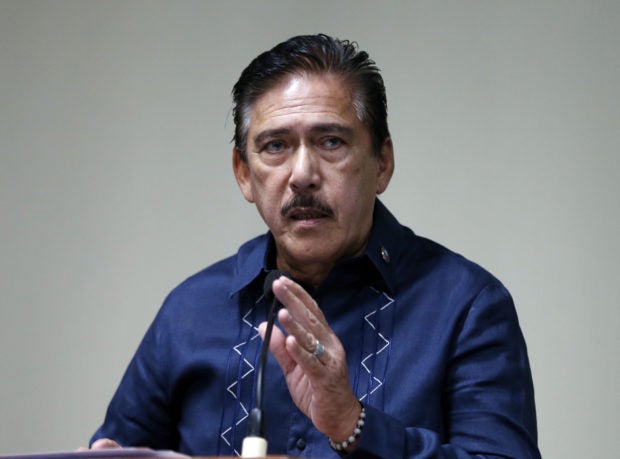 MANILA, Philippines — Senate President Vicente Sotto III on Monday filed a measure that will amend the Republic Act No. 7941 or Party-List System Act by disallowing or canceling the registration of party-list groups participating “in acts to overthrow the government,” among others.

Sotto filed Senate Bill No. 1989, seeking to ensure the party-list system’s intended purpose of providing representation of marginalized and the underrepresented sectors in Congress is upheld.

Under the bill, any political party, sector, organization or coalition whether national, regional or sectoral may register for the purposes of the party-list system “provided that they must represent the marginalized and underrepresented sectors, organizations, and the parties and that they lack a well-defined constituency.”

Sotto’s proposal likewise wants to include the following as grounds for the Commission on Election (Comelec) to motu propio or upon verified complaint of any interested party, refuse or cancel, after due notice and hearing, the registration of any national, regional or sectoral party, or organization or coalition:

“The party-list system has also been abused and used as a vehicle to pursue advocacies that are not for the best interest of the government,” the bill’s explanatory note read.

“The deviation from the true mandate of the party-list system has created the evil that was sought to be prevented by the framers of our Constitution, which is to increase the social, economic and political inequalities,” it further said.

Senate Minority Leader Franklin Drilon backed Sotto’s bid to amend the party-list law “in order to give true meaning to it.”

“I must admit that the party-list system has been bastardized today. If you read the Constitution, it is designed for the marginalized and the underrepresented through the congressional districts. But in truth and in fact, if you look at the composition of the party-list today, that objective has been lost,” Drilon told reporters in an online interview Monday morning.

“The intention of the party-list is really open to question of the present system of election,” he added.