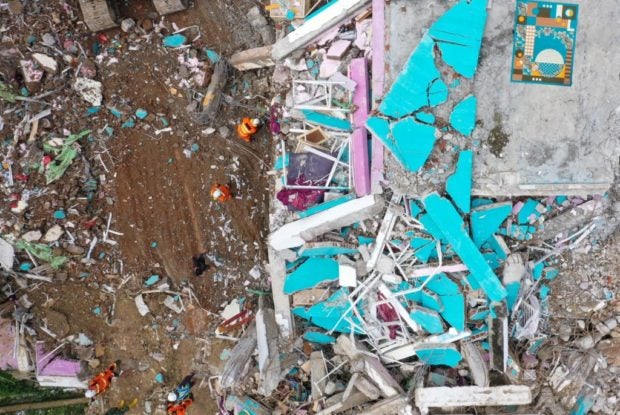 MAMUJU, Indonesia — Medics battled exhaustion and the risk of Covid-19 as they raced Monday to treat scores of people injured by a devastating earthquake on Indonesia’s Sulawesi island.

At least 81 people were killed and thousands left homeless by the powerful 6.2-magnitude quake that struck early Friday, reducing buildings to a tangled mass of twisted metal and chunks of concrete in the seaside city of Mamuju.

Masked doctors treated patients with broken limbs and other injuries at a makeshift medical centre set up outside the only one of the city’s hospitals that survived the quake relatively intact.

“This is the only hospital operating in the city. Many need surgery but we have limited resources and medicine.”

The open-air triage centre was desperately short of staff, and those on hand worked frantically despite the risk of contracting coronavirus.

The hospital was scrambling to open up more rooms for surgery and erect additional tents outside to treat the injured, said Nurwardi, who like many Indonesians goes by one name.

But fears that another quake could bring down the building were adding to the challenges.

“Many patients do not want to be treated inside the hospital because they’re worried about another quake,” Nurwardi said.

“Well, it’s not only them, the medics are… scared of being inside the building too.”

It was still unclear how many people — dead or alive — could still be under mountains of debris, as rescuers rushed to find survivors more than three days after the disaster.

Most of the 81 dead were found in Mamuju, but some bodies were also recovered south of the city of 110,000 people in West Sulawesi province.

Friday’s tremor triggered panic among residents of the island, which was hit by a 2018 quake-tsunami disaster that killed thousands.

At least 18 people had been pulled out of the rubble alive, including a pair of young sisters, according to official data.

Police began using sniffer dogs to help in the search at a badly damaged hospital, as body bags were filled with recovered corpses.

“There are probably some people still trapped under the rubble,” search and rescue agency spokesman Yusuf Latif said Monday.

Meanwhile, about 19,000 people left homeless by the quake took refuge at dozens of makeshift shelters — many little more than tarpaulin-covered tents filled with whole families.

They said they were running low on food, blankets and other aid, as emergency supplies were rushed to the hard-hit region.

Many survivors were unable to return to their destroyed homes, or were too scared to go back, fearing a tsunami sparked by aftershocks, common after strong earthquakes.

Fearing an outbreak of coronavirus in the crowded camps, authorities were trying to separate high- and low-risk groups.

Indonesia, a Southeast Asian archipelago of nearly 270 million, has been hit by a series of natural disasters this week, including deadly landslides, flooding and a pair of volcanic eruptions.

The country experiences frequent seismic and volcanic activity due to its position on the Pacific “Ring of Fire”, where tectonic plates collide.

On December 26, 2004, a massive 9.1-magnitude earthquake struck off the coast of Sumatra, triggering a tsunami that killed 220,000 throughout the region, including 170,000 in Indonesia — among the worst recorded disasters in history.