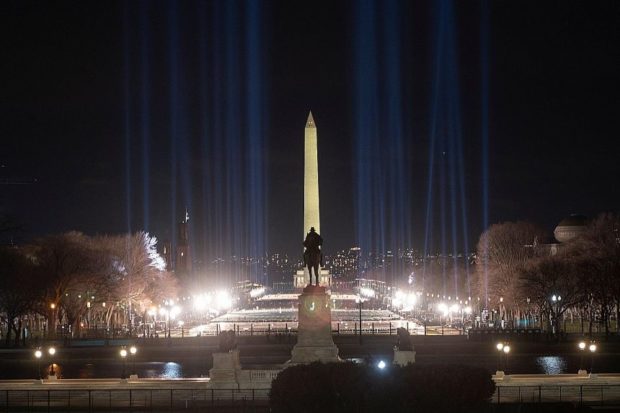 The Washington Monument framed by spotlights on the National Mall in Washington on Jan 16 as preparations were under way ahead of President-elect Joe Biden’s inauguration ceremony on Jan 20. AFP via The Straits Times/Asia News Network

WASHINGTON — The inauguration of US President-elect Joe Biden and Vice-President-elect Kamala Harris on Wednesday (Jan 20) will look very different from the nation’s past ceremonies, as the pandemic and heightened security threats mean that crowds will be drastically smaller and celebrations curtailed.

Mr Biden will take the presidential oath of office and be sworn in as the 46th President of the United States around noon US time.

In the past, hundreds of thousands of Americans, many of whom had travelled to the capital from other states, usually gathered on the National Mall – the park flanked by the Lincoln Memorial, Washington Monument, Smithsonian museums, US Capitol and White House.

Not this time. The National Mall will be closed to the public due to security concerns, and officials are discouraging people from traveling to Washington for the inauguration.

Viewing stands will not be erected, and the number of tickets available will be much smaller this year. Previous inaugurations distributed 200,000 tickets, but this year only 1,000 tickets will be given out and Congressmen will only be allowed to bring one guest.

Due to security concerns, Mr Biden also scrapped his plans to travel to Washington DC from his home in Wilmington, Delaware, by Amtrak train. The two-hour rail journey would have been a nod to his tradition of commuting daily from home to Congress in the three decades that he served as a senator.

Thousands of National Guard troops have also been deployed to Washington for extra security following the Jan 6 storming of the Capitol by a pro-Trump mob, and amid federal authorities’ warnings that more violence is expected.

So far, up to 21,000 troops have been authorized to help lock down the nation’s capital.

But the show will go on. In the pared down ceremony, superstar Lady Gaga will sing the national anthem and Jennifer Lopez will give a musical performance, the Presidential Inaugural Committee announced last Thursday. The inauguration will be themed ‘America United’, it said.

Mr Biden will be sworn in on the steps at the west front of the Capitol by Chief Justice John Roberts.

The new President will then give his inaugural address and conduct a ceremonial inspection of military troops, in keeping with tradition.

Following that, Mr Biden, Ms Harris and their spouses will visit the nearby Arlington National Cemetery and lay a wreath at the Tomb of the Unknown Soldier to honor America’s fallen troops. They will be accompanied by former presidents Barack Obama, George W. Bush, Bill Clinton and their spouses.

To represent Americans who are unable to travel to Washington DC, there will be a public art display on the National Mall of 191,500 US flags, including flags representing every state and territory, and 56 pillars of light – one for each of America’s 50 states, Washington DC, and five territories. 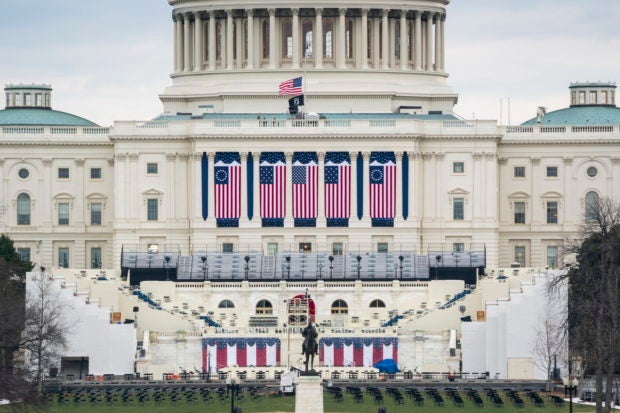 The US Capitol is seen ahead of President-elect Joe Biden’s inauguration from the National Mall in Washington on Jan 17, 2021. EPA-EFE via The Straits Times/Asia News Network

Since Saturday (Jan 16), there have been virtual programs streamed live, which will culminate in a primetime television special on Inauguration Day.

Mr Donald Trump will not attend the inauguration, becoming the first president in 152 years to break the tradition of attending their successors’ inaugurations to convey their commitment to the peaceful transition of power.

He will instead hold his own departure ceremony at Joint Base Andrews in Maryland before his final flight aboard Air Force One, and leave Washington on the morning of the inauguration, the Associated Press reported.

But outgoing Vice-President Mike Pence will attend the ceremony, as will all of America’s living former presidents except for 96-year-old Jimmy Carter, due to Covid-19 exposure concerns.

“Our Inauguration Day is one that demonstrates the continuity of our country and the renewal of the democratic process, as well as the healing that is sometimes needed after an election battle,” said George Washington University political scientist Lara Brown.

This year, what can be expected is a “certain amount of soberness and solemnity” in the acknowledgment of the more than 370,000 Americans who have died from Covid-19 so far, and the dark days of the pandemic ahead.

“There is a desire to both sort of acknowledge the difficulty that we are in, but also offer a vision of hope and optimism about the future that this sort of coronavirus and economic crisis will be confronted, and that it will pass, and that we will have a brighter future,” said Dr Brown.

Mr Biden, who has promised to be a president for all Americans, even those who did not vote for him, will likely also call for unity in his inaugural address – particularly in the wake of the Capitol riot.

“Speeches have typically struck those kinds of themes and tones: that whatever our party differences, whatever our ideological divides, we are all Americans and we must move forward together,” said Dr Brown. “And so I imagine we will see that again.”